Summary: Action homage and parody about the world’s greatest assassin misses its targets.

Sexcastle isn’t very good. Praised widely as a satirical homage, Kyle Stark’s Sexcastle struggles to escape and perpetuate the conventions and stereotypes it mocks. It aims for deadpan and dark humour, I think, but it comes off as infantilised and puerile as it interrogates and parodies the action stars and heroes of the 70s, 80s, and 90s. As Starks wrote on his Kickstarter when he was gathering funds to produce the first run, “I made a 200 page comic homage to the 80s Action Movie genre that has influenced me so as a creator. I wanted something fun, but violent, chock-full of awesome fights, over the top action and tough guy dialogue. I wanted to make something simultaneously bad-ass and hilarious. So I made Sexcastle.” The eponymous Sexcastle is a hardened assassin who has been released after a long stint in jail. He yearns for peace, for freedom, and horticultural work. Unfortunately, life has other ideas for him, or rather his own nature has other ideas for him, and his peaceful retirement goes down in flames.

The principle behind Sexcastle is great, action films are genre ripe for parody and critique. Stark’s artwork nails it, perfectly. But the storyline fails where the drawings succeed. Starks has tried, I think, to do something intelligent and fun. Like most boys growing up in the 80s and 90s, Stark was saturated by the various types of machismo that saturated film and television. Stallone, Schwarzenegger, Norris, Bronson, Van Damme, and Lundgren are but a few of the ultra-macho action stars that flexed, sheened, and sweated across television screens during the golden age of action films. These films defined masculinity for a generation – big, violent, murderous, and unrestrained in their pursuit of vengeance or national pride. Action films became caricatures of masculinity, but that didn’t stop a generation of men growing up wanting to ape them. Over time, the absurd proportions and ridiculous body-counts faded into modern action films. Now lithe male heroes like Statham or Walker acrobatically bounding through set-piece after set-piece with bigger and brasher stunts. It’s understandable that as the fashion changes, a nostalgia remains for the previous ideals. Similarly, as the dust has settled from the excesses of the 80s and 90s, people have begun to reassess and critique these ideals. Sexcastle seems to be doing a little bit of both, and only succeeds partially at one. 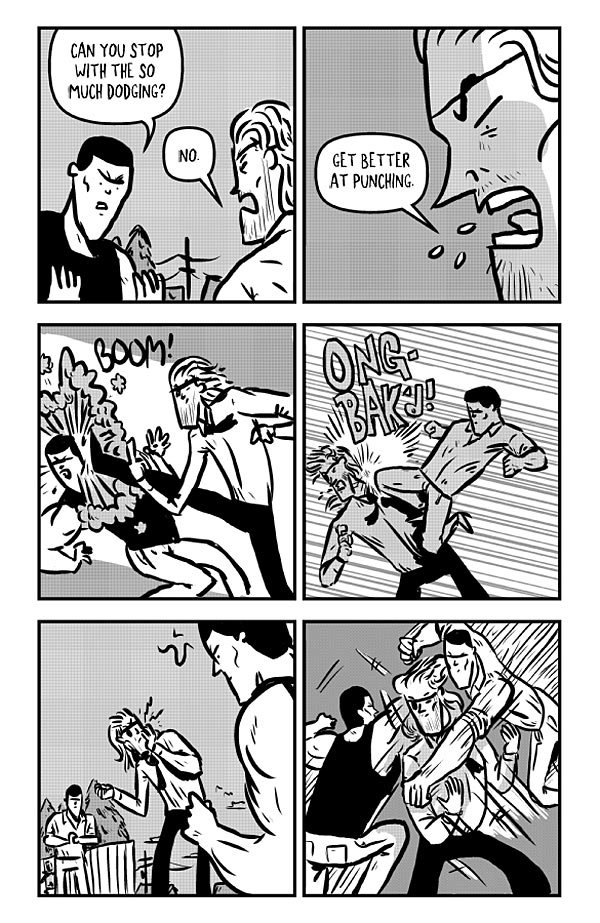 Sexcastle opens with Shane Sexcastle leaving jail. He is accosted by the former Vice President who wants to rope him into one last gig. Sexcastle refuses and heads off to Bradley, a rural idyll. He stumbles into a flower shop looking for work decorating roses and instead he finds trouble. Lots of it. The opening dialogue and narrative had me hooked. And because of this, I was expected something insightful and witty. I thought Stark was going to take things in an interesting direction with Sexcastle’s early desire to to see the villain respect a woman and treat as “a human.” After all, a character “born mean” can’t be all serious can he? Well Sexcastle is and it sucks the early humour out of things. Sexcastle’s feminist schlep is merely cover for him mansplaining parenting to Jo and role-modelling toxic-masculinity to her young kid. As more characters are introduced and the stakes are raised higher, the traditional conventions and tropes of 80s action become more and more prominent and unfunny. 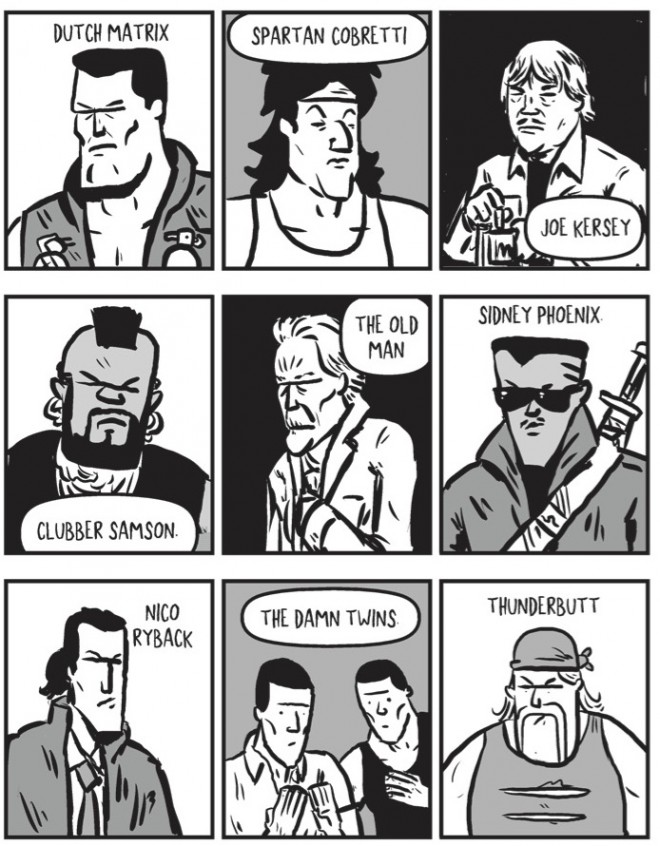 Jo and Chou are purely there as motivations for Shane. They lack depth and serve only as inciting objects and catalysts for his anagnorisis. It’s predictable and not particularly funny. There were a myriad of opportunities for Sexcastle to provide some incisive and witty comedy or satire on the genre. It’s possible to pay homage to something, whilst taking it to task. But Stark’s heart seems more invested in praising the films and tropes he apes, than sticking with the criticism he begins with. His artwork is top-notch for what he is trying to do. The black and white comic strip captures the ridiculousness of 80s action films. The dialogue is a perfect imitation of 80s films like Roadhouse, but to my mind Stark doesn’t get the tongue lodged in the cheek – Sexcastle is too busy ripping it, and every other humourous organ, out of the villains in the book. 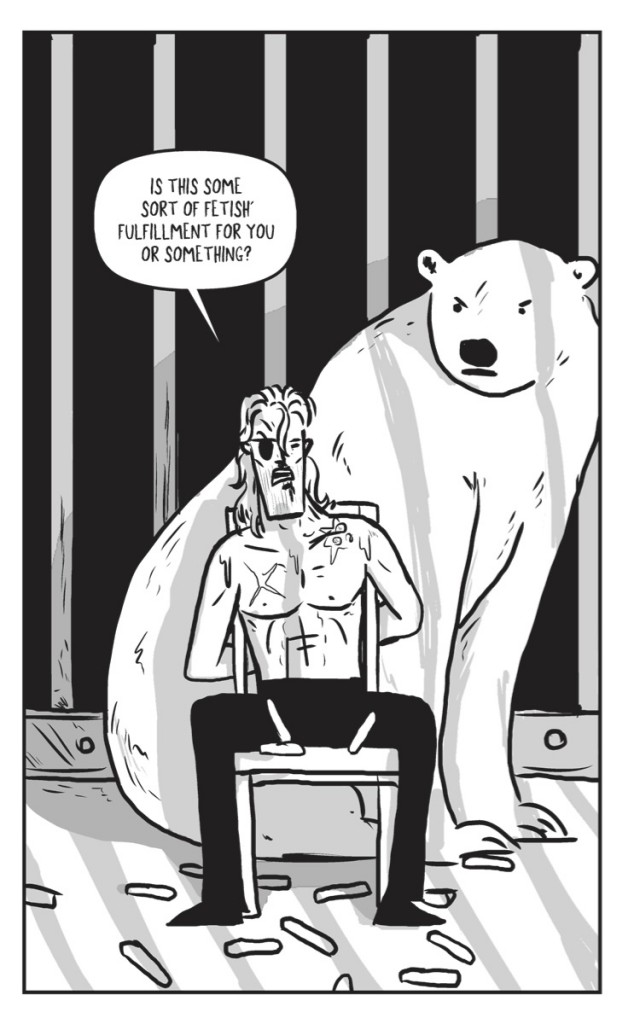 The bottom line, scraping the barrel. I didn’t like Sexcastle at all. The writing is shallow, the characterisation unnecessarily hollow and the stereotypes pointlessly classless and demeaning. It’s a noble idea, offering up a parodic homage to the action film gods of yore – it’s a genre ripe for the taking and deserved of the critique and adulation. But Sexcastle doesn’t do either and in my opinion is the anachronistic thing it seeks to mock.

1 Flaccid and Predicatable Assassin out of 5