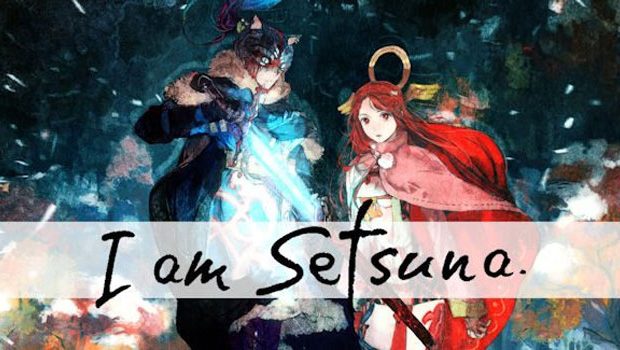 I Am Setsuna Switch Review

A launch title for the Nintendo Switch, I am Setsuna calls back to the those classic 16-bit RPGs of yesterday like Chrono Trigger and the early Final Fantasy games. It also makes for a good portable RPG experience on this new console as it becomes a nostalgic throwback to the simpler days of video gaming, revelling in JRPG tropes and using an Active Time Battle system to great effect. Compared to the PlayStation 4 version, it plays just as good, maybe slightly better as it seems a little more refined with the Joy-Cons.

The Switch version is also getting a free DLC entitled Temporal Battle Arena which will allow players to duke it out with other players and earn Spritnit. So if you own the PlayStation 4 version, there is little need to revisit this game again, however if you’re looking for a JRPG experience, this is the place to come provided you can ignore its reliance upon anachronistic game design which may be viewed by some as a detriment to the game. As a result, it suffers in terms of originality due to adhering so rigidly to the formula and structure of the games that inspired it.

Developed by newcomers Tokyo RPG Factory by an incredibly small team, I Am Setsuna effortlessly captures that feeling of playing one of Square’s golden age RPGs within the first minutes of gameplay; the player is gently introduced – Or should that be re-introduced? – to the mechanics of the game during an opening section that doubles as a tutorial and serves as a prologue to the story proper. I Am Setsuna makes no bones about wearing its influences on its sleeve; the first combo attack you use, the X-Strike, is ripped almost wholesale from Chrono Cross and the main storyline has more than a few similarities to that of Final Fantasy X’s. 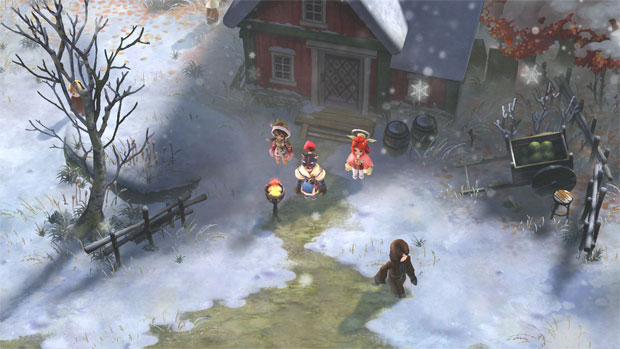 You play as Endir (Although, like most main characters in the game you can customise his name), a masked swordsman who hails from a tribe of mercenaries and travels the land seeking jobs as much for the excitement of combat as for the financial gain. After completing a mission, Endir meets a mysterious man who tasks him with killing Setsuna, a young girl who is to be offered up as a sacrifice in order to keep the snow covered lands free of attacks from monsters. After locating his target, Endir is overpowered by Setsuna’s protectors and imprisoned before being given a chance of redemption by Setsuna herself: Travel with Setsuna on her pilgrimage and ensure her safety until the time of the sacrifice, at which time he’ll also have technically fulfilled his contract and will be free to roam the world once again. 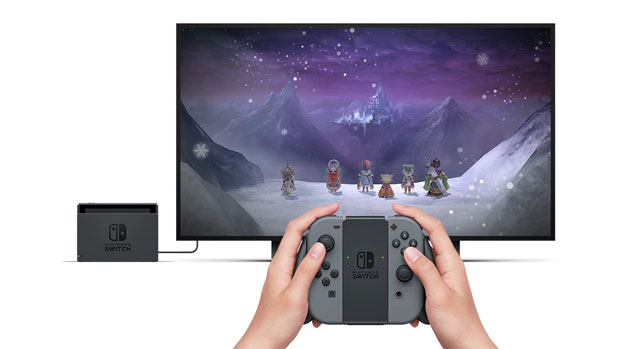 Aside from a mysterious scythe wielding antagonist following the party, there’s really no true villain to the game in the shape of classic nemeses like Sephiroth or Kefka and the story suffers as a result. There’s no constant threat hanging over our character’s heads or any real impetus for the thrust of their journey, simply a task that has to be completed because tradition dictates it. There are enough diversions and minor enemies that you’ll come up against in order to hit certain story beats and help prevent the story from becoming mundane and too straightforward, such as a corrupted ruler of a city who has been using a small community disguised as a sanctuary as a source of his own sacrifices to the fiends that besiege the lands, but the absence of an overarching villain is still sorely felt. 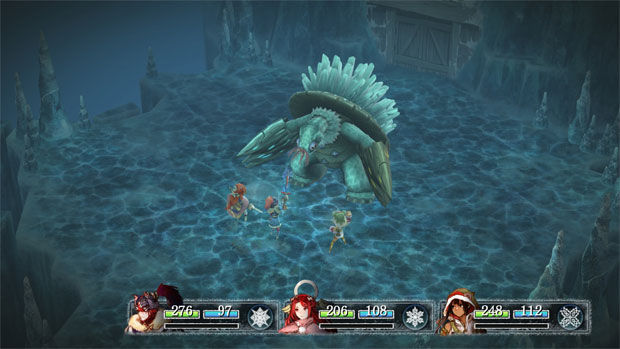 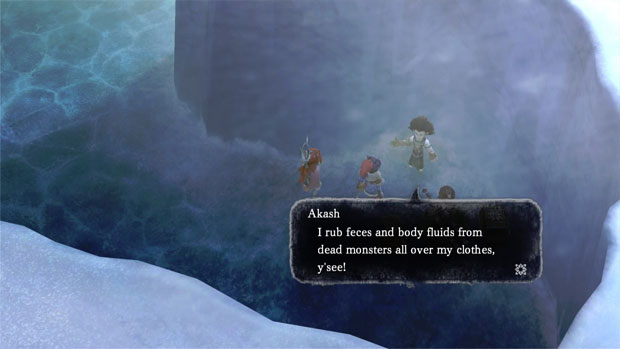 You do this by hitting the square button during a brief flashing effect, making the combat feel slightly more dynamic than simply waiting for gauges to fill up. Characters also have access to special moves, such as high powered attacks or combo attacks, which drain your MP gauge and can be tweaked through the use of Spritnite, which basically function like Materia. You can also equip your characters with talismans that add an extra ability, such as speed boosts or being able to see the health gauges of your enemies. Rather than relying upon random encounters, you can see all monsters within each area and choose to avoid most of them if you so desire, which is a nice touch. The overworld is strangely devoid of enemies, however, although some players may see this as a blessing in disguise, as the combat can become a tad monotonous after spending a few hours with the game and being constantly forced into battle would only exacerbate that.

I Am Setsuna has fairly simplistic graphics but they serve the setting well and the art direction is rather nice and whimsical (even if characters all look like they have peglegs instead of feet), employing the anime inspired style of classic Square titles. The snowbound environments are solid, if a little bland, and carving a trough through the powder with your character never quite loses its charm. Still, it must be said that, after a while, you’ll start to yearn for a little more variety in the environments, with certain towns seemingly reusing assets for interiors and the ruins encountered later in the game not being enough of a deviation from what came before. 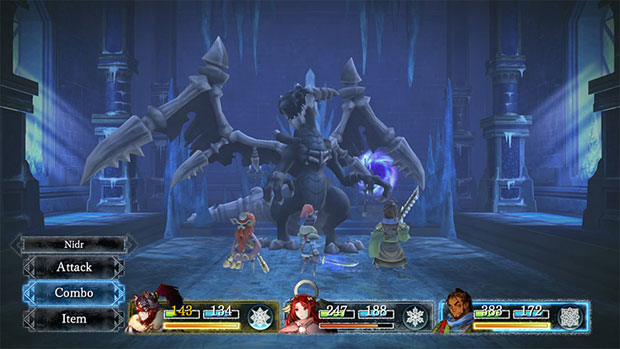 The audio, on the other hand, is simply sublime, at least musically. The members of your party say a few Japanese lines throughout battle (there is no localised translation) that repeat ad nauseam, although you can turn off Endir’s and the sound effects do the job but are nothing too spectacular and inadvertently reveal the lower budget of the game. The soundtrack is composed exclusively on piano and feature some truly gorgeous tunes that rank up there with the all-time classic themes of old, at least in my opinion. Certain compositions, such as the overworld and battle themes, can get repetitive by the end of the game but overall it’s in this department that I Am Setsuna’s sound design truly shines. 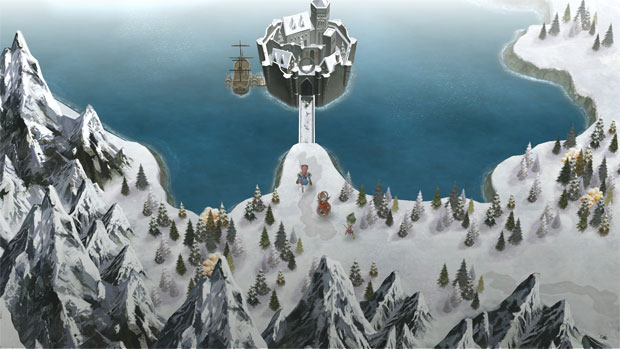 Capitalising upon nostalgia can be a tricky task. If you don’t innovate enough to distinguish yourself from your contemporaries then your game can suffer as a result and come off as too derivative and this is a pitfall that I Am Setsuna doesn’t entirely manage to avoid. The combat system, despite the little flairs and tweaks, does admittedly lose its sheen after a few hours and the dungeon design falls short of the lofty achievements of I Am Setsuna’s inspirations. 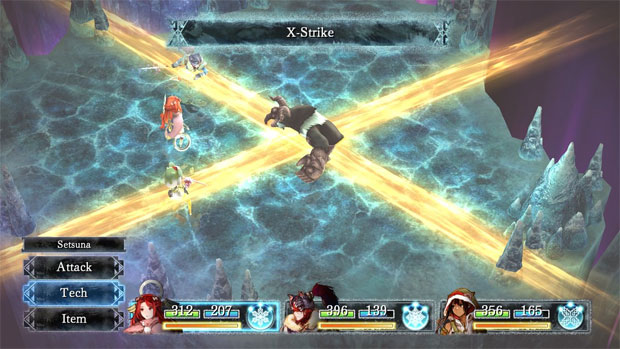 The story could also be criticised for being underdeveloped, with character arcs glossed over and no true emotional connection with your party members, but I must admit I kind of liked the more simple approach to storytelling despite the lack of a major antagonist. I Am Setsuna is a little too shallow at times to truly stand out as a worthy successor to its precursors but, if you have a hankering for a throwback to Square’s golden age of RPGs but with a current generation sheen applied, it’s worth giving the game a look even if it doesn’t quite manage to reinvent the wheel. 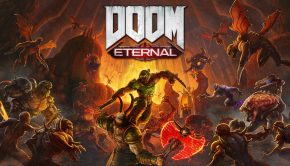 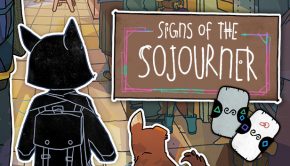 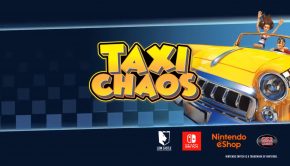