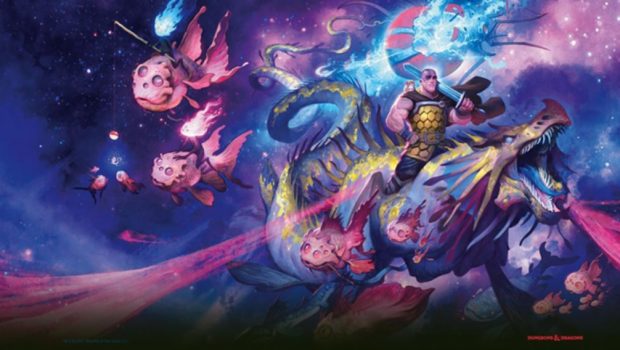 Set sail across the Astral Plane in Spelljammer: Adventures in Space

Wizards of the Coast today released Spelljammer: Adventures in Space, the latest campaign for the world’s most popular tabletop role-playing game, Dungeons & Dragons (D&D). A glorious reimagining of the classic setting first introduced for 2nd edition, Adventures in Space builds on the thrill of nautical exploration by sailing through the Astral Plane, home of the stars, gateways to heavens and miniature giant space hamsters! It will feature three hardcover books plus game accessories and is available on Amazon AU or at local gaming retailers.

Voyage across the Astral Sea aboard a spelljammer, a magnificent flying vessel built to traverse interplanetary space. In a realm of endless possibility, Adventures in Space offers a thrilling new setting for both seasoned and new spacefarers. Adventurers can soar across the silver oceans of Wildspace, explore a giant citadel built on an asteroid, and discover mysteries behind the decaying remnants of gods floating in the ether.

Spelljammer: Adventures in Space contains a double-sided poster map of the campaign’s hub city, the Rock of Bral, and a sturdy four-panel Dungeon Master’s screen designed for use with the following set books (with additional alternate-style covers available only through local game stores):

A must-have for spacefarers from all corners of the multiverse, The Astral Adventurer’s Guide is a 64-page hardcover book detailing the Astral Plane setting, aimed at players and Dungeons Masters to acquaint themselves with everything they need to run a campaign within the Astral Plane.

Exploring a cosmic realm teeming with life will be difficult for adventurers who don’t possess Boo’s Astral Menagerie, a 64-page hardcover book that serves as a detailed bestiary for Dungeon Masters.

Designed for characters levelled five to eight, Light of Xaryxis is a thrilling multi-episode campaign that will sweep players on a journey through Wildspace and the Astral Sea.

Contains: Details for new and returning locations within the Astral Plane such as the Rock of Bral, new mechanics, NPCs, Dungeon Master materials and more.

Spelljammer: Adventures in Space launches today and is now available to be purchased at local gaming retailers, bookstores, and through online retailers.

For more information on Spelljammer: Adventures in Space, visit https://dnd.wizards.com/products/spelljammer.