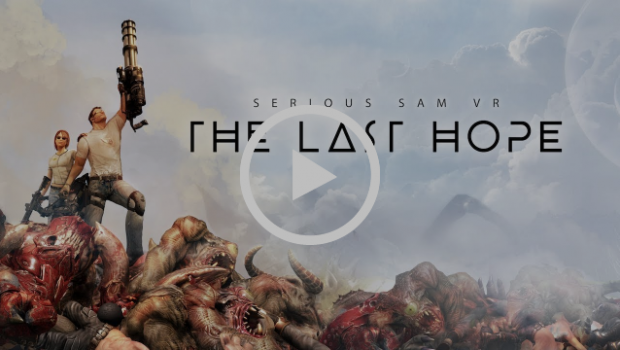 Zagreb, Croatia – Croteam has fully launched their top-selling VR hit Serious Sam VR: The Last Hope after completing its development period in Steam Early Access over the past eleven months. The seminal VR shooter is now available as a full release on Steam and is 25% off for a limited time to celebrate this major milestone.

Since the introduction  of the game last year, Croteam has expanded Serious Sam VR: The Last Hope to five different planets, regularly added new weapons, and even a skill update that included 36 powerups and 190 different weapon upgrades. The epic final update introduces a new playable character Serious Sammy and randomly generated missions for limitless gameplay for the most hardcore Serious Sam VR community. This new gameplay will be available in five existing levels alongside three new ones, all divided into three different modes – Arena, Endless Wave, and Daily Challenge.

Arena – This mode allows players to enjoy endless variety thanks to randomly generated waves of enemies that ensure every playthrough is completely different. Players are challenged with 8 arenas consisting of 4 waves, each playable on 20 difficulties. Beating an arena difficulty awards a weapon upgrade icon.

Endless Wave – In this mode players will face an endless wave of enemies, trying to stay alive as long as possible, and get bragging rights over their peers via global leaderboards.

Daily Challenge – Endless wave on the arena map of the day, where each day a new set of enemies is served so that everyone playing faces exactly the same challenge and competes against the rest of the world.

Follow @Croteam on Twitter to keep up with the latest developments from their VR labs and updates on other Serious Sam VR games and news about the upcoming The Talos Principle VR.