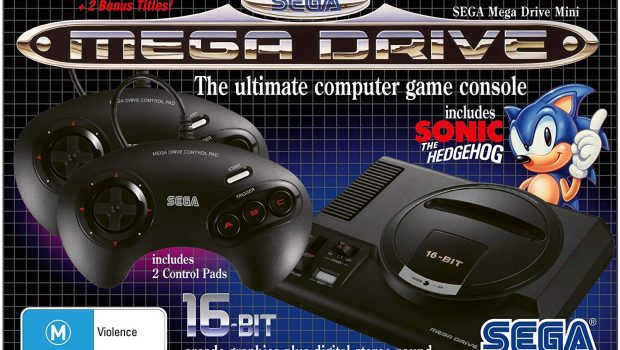 Summary: Break out the Hammer pants, stock up on PopTarts and turn on Cheez TV as we check out SEGA's new retro console.

I was surprised to hear about this re-release as it seemed to come out of nowhere after the other retro console re-releases. There had been a couple of attempts at Megadrive re-releases before but they were not made by SEGA so were not as good.

As a big fan of the Megadrive in the 1990s I wanted to see how this would turn out as although I still have my old console at my parents’ place I am not sure if it still works. SEGA hardware is notorious for breaking down due to the electronics involved. Some of the original cartridges are not cheap these days and the batteries for the save games have long since ran out.

I looked at getting the Genesis Mini while I was over in the USA but had other things to do. Is about $20 cheaper if you do but you still have to pay for shipping. The advantage is that you get the USA releases of the games, the Megadrive mini only has one English language setting. The Japanese version has different games but a lot of these are RPGs with no English text. The Asian release has some other exclusive releases but I am sure collectors will get them all, but you will have to get them on import as no-one will sell anything outside of their region just like the bad old days of the 1990s.

Due to the system being an emulator on a chip in a pretty box, the console itself is about a quarter the size of the original. The controllers are as big as the console. If you really want to play the fighting games included (Street Fighter II/Eternal Champions) I would get some six-button controllers.

I have played a lot of games on emulators and would say it is a different experience than playing on a console. Going back to some of these on the console they seem as they were playing them back in the day. I did not play a lot of the more obscure titles as I only got games for my birthday and Christmas each year which were one month apart.

I do not remember there being this many RPGs on the system? The Megadrive was always known for arcade conversions, action games and shoot ‘em ups. I am pleased to see Landstalker included as it was always one of my favourites even though I never owned it.

I suppose they have to include the Sonic games but why Altered Beast every time? Alex Kidd? It is not the series you remember from the Master System.

It is good to have two controllers included for the two player games and you can change the listing to show which games are two player.

It does come with a HDMI cable but only a USB power cord but I have found it works fine with an old phone charger plug.

This console is good if you just want to play something for a couple of hours. There are save slots in the menu so you can come back later for the longer games and RPGs. I have saved in the middle of battles and come back while playing Shining Force as they can be very long.

Nice to have some puzzle games included also, I remember my mum being addicted to Columns back in the day.

Could have used some instructions for some of these games, but since they are so old they are all up on the web and easy to find.

At the moment it is a bit more expensive than it was in pre order due to it being in demand and rare. Maybe wait for a bit if you do not want to pay so much. Back in the 1990s one of the games for this system would cost about $90 so I am happy with the price. You can get the Sega Megadrive classics releases on the other consoles and Switch but I am happy with having a physical product.