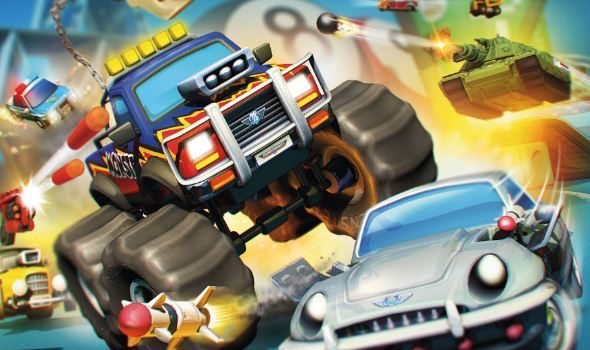 Whether driving a SPY CAR destroying a HOVERCRAFT with a NERF Blaster in the Games Room, or a DUMP TRUCK blowing up a TANK with a Dynamite Launcher in the Garden, Micro Machines World Series will have players of all ages smiling from ear-to-ear while delivering absolute carnage.

Executive Producer, Chris Gray, said: “Micro Machines World Series is a fresh new take on the franchise that is great fun for previous players and those new to Micro Machines. It’s a firm fan favourite and we are delighted to be bringing it to the PS4, Xbox One and PC.

Chris continued: “In addition to the return of the classic Race and Elimination modes, we are extremely excited by the new Battle Arenas. Having 12 players in the same match, all fighting it out with a variety of vehicles and crazy weapons is great fun. Gamers are going to love it.”

Players will take on a whole new way of racing in Micro Machines World Series. Not only will players be able to burn rubber across the Kitchen table in familiar 4 player ‘sofa style’ local races but also enter into larger 12 player on-line races. So many players on one screen seriously increases the challenge, and all 12 vehicles jostling for position and hurtling toward each corner makes it even more perilous and exciting.

In addition to the code racing modes are the Battle Modes which pit up to 12 players into the same arena for frantically competitive multiplayer games including CAPTURE THE FLAG and TERRITORY as well as 6v6 TEAM DEATHMATCH. All of these are set to the interactive backdrop of 15 battle arenas including The Laser Lab, Buzzsaw Battle and negotiating the HUNGRY HUNGRY HIPPOS board without being eaten.

Players can personalise their Battles with 12 new vehicles including the SPY CAR, HOVERCRAFT, MONSTER TRUCK or G I JOE H.I.S.S TANK, each with their own strengths and weapons. Players will set off trying to crush, smash and destroy opponents with numerous new weapons including the Dynamite Launcher, Tidal Wave, Cobra Turret and NERF Blasters. Every vehicle also has a level of customisation with new skins, completely changing the original look. The inclusion of Emotes, Victory Poses and Grave Stamps also add to the camaraderie and bragging rights at the end of a match.

Adding to the hilarity and fun of Micro Machines, the UK release is narrated by the one and only Brian Blessed. In his own, recognisable and unique style Brian bursts forth announcing the start of races as well as “ENEMY FLAG TAKEN” and “MICRO MACHINES IS ALIVE!”