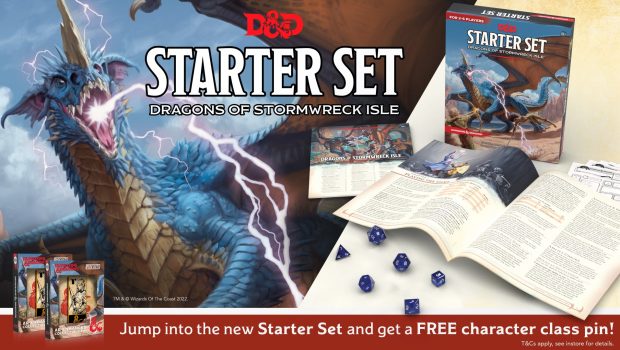 Earlier this month, Wizards of the Coast released Dragons of Stormwreck Isle: the latest update to the Starter Set for Dungeons & Dragons (D&D), the world’s greatest roleplaying game. Touted as the gateway to D&D, the new Starter Set contains the essential rules of the game plus everything you need to play heroic characters caught up in an ancient war among dragons as they explore the secrets of Stormwreck Isle.

To celebrate the launch of this new Starter Set, Pop Culture store ZiNG has a promotion where customers receive a D&D AR Pin with each purchase of Dragons of Stormwreck Isle! This promotion is currently running across 150 ZiNG stores nationwide while stocks last.

In tandem with the launch of the new Starter Set, Wizards has released a series of ‘How to Play’ videos covering topics such as how to DM, how to roleplay and how to prepare for Stormwreck. The videos can be found here: https://dnd.wizards.com/how-to-play.

With the D&D movie slated for release in 2023, there’s never been a better time to get into D&D!