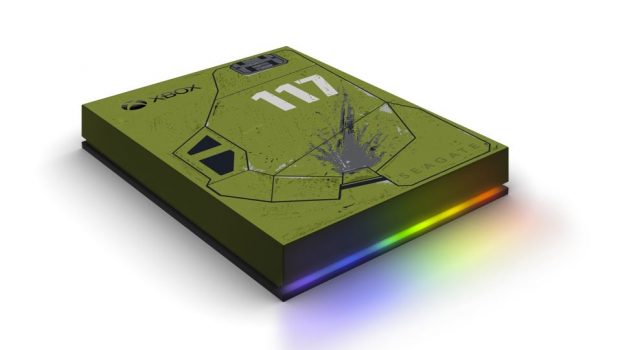 Have a Halo fan at home? Conquer their gaming limits — and the Banished — while showing your love for them with the officially-licensed Xbox Halo Infinite Special Edition Game Drive

It’s pocket-sized with up to 5TB of storage and seamless plug-and-play compatibility with Xbox Series X, Xbox Series S, any generation of Xbox One, and Game Pass, plus customisable LEDs to create an epic Halo experience.

When connected, this storage expansion card seamlessly replicates the experience of the Xbox Series X|S internal storage-increasing the capacity while maintaining its full speed and power.

The final results immerse gamers inside the most dynamic worlds Xbox has ever dreamed up. The extra capacity of this expansion card means that not only is there more room for play on the Xbox Series X|S for thousands of Original Xbox, Xbox 360, and Xbox One games, but they’ll be optimised for the Xbox Series X|S — with improved load times, more stable frame rates and higher resolutions.

Whether playing at home or unplugging and taking the Seagate Storage Expansion Card for Xbox Series X|S to a friend’s house, this is the next level of gaming.

512GB and 2TB will be available in mid-December – pricing to come.

Upgrading to a new Sony PS5 for your family? Why not add on a Seagate FireCuda 530 with Heatsink – an easy drop-in expansion solution with no additional parts needed.

The FireCuda 530 redefines speed with exhilarating performance of up to 7,300 MB/s thanks to PCIe Gen4 power. With transfer rates 2x faster than SATA SSD’s, this SSD is built for sustained abuse and accelerated gaming. It’s fully compatible with PS5 consoles and meets PS5 specs on performance and dimensions.