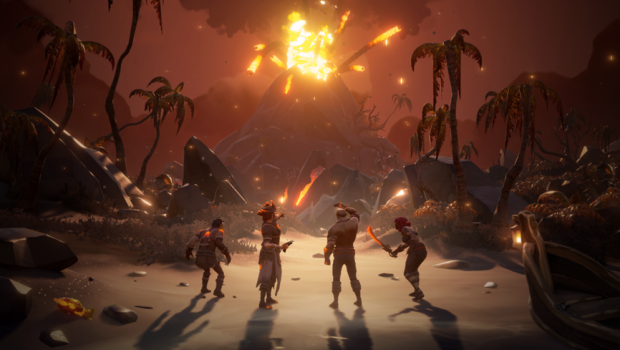 At gamescom 2018, we gave a first glimpse at Forsaken Shores, our latest free content update coming to Sea of Thieves. As part of our ongoing commitment to deliver new Sea of Thieves content throughout the year and beyond, Forsaken Shores offers our biggest update yet at no charge for those who own the game or access it through Xbox Game Pass. There has never been a better time to set sail and adventure with other pirates in the Sea of Thieves community.

Today, Forsaken Shores invites players to venture into a new volcanic region called The Devil’s Roar. This perilous and challenging area of the Sea of Thieves will have players encountering volcano eruptions raining down hot rocks and flowing lava, terrifying earthquakes, unpredictable geysers that can fling players into the air and dangerous super-heated water around islands.

Also new to Forsaken Shores is the Row Boat, which will be key to assisting the navigation of this dangerous new region, but also enriching all journeys across every area of the world. Players can also take on new Devil’s Roar Voyages, with increased challenge that allows players to reap greater rewards.

This permanent new content will be introduced into Sea of Thieves with a time-limited campaign, running for four weeks from today, September 27, where players will be able to discover exactly what happened to the first crew that managed to make their way to The Devil’s Roar. As part of the campaign, players can also find new quests with the Merchant Alliance, taking on Cargo Runs across the world, keeping their cargo safe and delivering it in pristine condition for the highest rewards. Cargo Runs will arrive in week three of the campaign and remain a permanent fixture of the Merchant Alliance moving forward.

This Forsaken Shores campaign and content update will be available free and without charge to all Sea of Thieves players who have bought the game across the Xbox One family of devices or on Windows 10 PC, or who have access to it as part of Xbox Game Pass. Simply download and install the latest Sea of Thieves update to get access. And don’t worry, if you’re unable to take part in the time-limited campaign, all the features introduced with this campaign will remain in the Sea of Thieves world for everyone to see and experience.

In celebration of the launch of Forsaken Shores, the Xbox team asked Matt Berry to deliver our most epic update yet. Matt eschewed the traditional tropes of a pirate performance and instead, bellowed out each point out in his unique fashion. The second the first syllable was uttered on set there were smiles all round, so we hope you have as much fun watching the above video as we had making it.

We are also proud to announce that Sea of Thieves will officially support Traditional Chinese as an official language option starting on November 8. We believe that by enabling the game in more languages, more players will be able to enjoy Sea of Thieves the way they are most comfortable, so they can fully immerse themselves in their very own pirate adventure.

Thank you to the entire Sea of Thieves community for your patience in waiting for Forsaken Shores. The team worked tirelessly behind the scenes to ensure that Forsaken Shores lives up to our collective quality and performance standards. We cannot wait to explore the Devil’s Roar with you. See you on the seas.

New to Sea of Thieves? Join the adventure at xbox.com/seaofthieves, and visit the Sea of Thieves website at SeaofThieves.com to embark on an epic journey with one of gaming’s most welcoming communities.