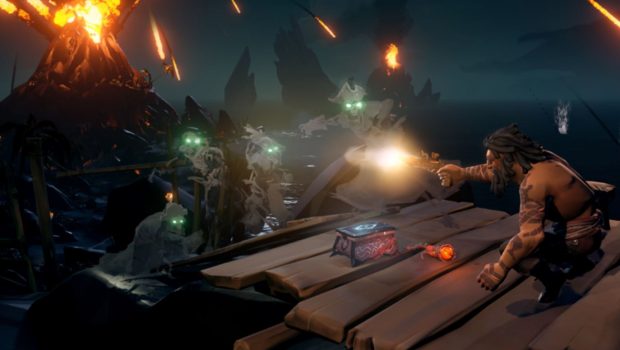 August is here and with it a new Monthly Content Update, falling into rhythm with Black Powder Stashes in July and more new content coming in September. Dark times have arrived on the Sea of Thieves, as skeletons have stolen several dangerous artefacts from The Order of Souls – the aptly named Dark Relics!

This new event begins on August 14th and brings a close to the previous event, a cycle that players can expect to see continue into the future. On the second Wednesday of each month, Sea of Thieves will gain a new Voyage type, special activity or other feature, serving up fresh regular content in the wake of the epic Anniversary Update. These updates will also include new cosmetics and Commendations, plus a mixture of time-limited and permanent activities and content.

This month, prepare to butt heads with a few skulls as the skeleton hordes attract the ire of the Order of Souls! In a worryingly organised raid, the undead pulled up their proverbial socks and robbed the Order of numerous powerful artefacts – the ominous Dark Relics – and scarpered across the sea. Now, as part of Duke’s ongoing efforts to build bridges with (or at least rack up substantial debts from) the Trading Companies, the Order has entrusted him with special Voyages to retrieve the stolen Relics.

Find Duke in the tavern to take on a Dark Relic Voyage, which will involve smashing a certain crew of skellies, taking back their Relic and delivering it to the Order for a handsome reward. There are Voyages up for grabs in The Shores of Plenty, The Ancient Isles and The Wilds, along with Titles and Commendations to earn. Earning Commendations will unlock more items from the highly sought-after Mercenary ship livery set – the cannons, capstan and wheel!

Pirate Legends and their crews can take on a further Voyage in The Devil’s Roar which will yield two Relics. There are five distinct types of Dark Relic, with a separate Commendation for selling each, so be on the hunt for the Enchantment Vessel, Hexing Skull, Evil Eye, Mutinous Effigy and Bewitching Doll. If you have spares or just can’t seem to complete the set, consider trading with other crews out hunting Dark Relics themselves…

Reports are also coming in of skeletons dropping Ritual Skulls, for which the Order (and for Legends, the Mysterious Stranger) will pay well. Meanwhile, Duke also wants pirates to watch out for Reaper’s Chests – a strange new type of treasure that has begun to appear in shipwrecks and looks set to be a permanent addition to the Sea of Thieves. Cursed with the Reaper’s Mark, just like the flag, these chests attract attention and can be spotted on all ships’ maps! Getting one back to Duke won’t be easy, but it will earn you Doubloons. What’s inside them? Not even Duke knows yet. Spooky!

You may be wondering how the skellies managed to scatter with these Relics without any pirates noticing? They were clearly too busy playing with Rowboat harpoons, the latest invention to cause mass silliness on the Sea of Thieves. This is another permanent addition and is sure to create some chaos, as pirates in Rowboats can now hitch a ride with ships or swipe treasure from shores. Perhaps this mobile harpoon will be useful when retrieving Dark Relics and Ritual Skulls from defeated skeletons… or when pilfering them from other crews!

Remember to keep up to date with Sea of Thieves Monthly Content Updates and other news through our social channels below. Expect to see a new event on the second Wednesday in September as we delve further into this new update cycle and keep bringing you new ways to Be More Pirate. In the meantime, visit our full Dark Relics page then head out to hunt down some artefacts and reap the rewards!