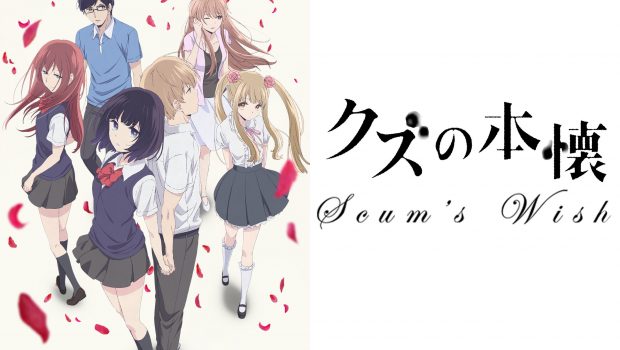 Summary: A dark twist on romance, that will have you questioning why you keep wanting more..

Kuzu no Honkai, Scum’s Wish, is a series about unrequited love and all the pain caused by it. You love someone, they love someone else, someone else loves you, for reasons that escape you or that are beyond you, your affections go unnoticed or unwanted, you curse fate for your pain but nothing ever changes. I’m sure that many of us can relate to the feelings felt by the characters in the series. The series is probably a little too much for the faint of heart as it can be a bit graphic, there’s no nudity or anything but plenty of suggestive and sexual references, so be aware that you have been warned. Hanabi, the series female lead is in love with her childhood friend and neighbor Narumi, who in turn falls in love with Akane the music teacher, while Mugi, the male lead has loved Akane since she became his tutor in middle school, Hanabi and Mugi both have their own admirers too. The two are aware of each other’s unrequited loves and decide to be each others replacement, sharing physical intimacy in place of the people they truly love. It’s painful to be alone, so they comfort each other, or do they? 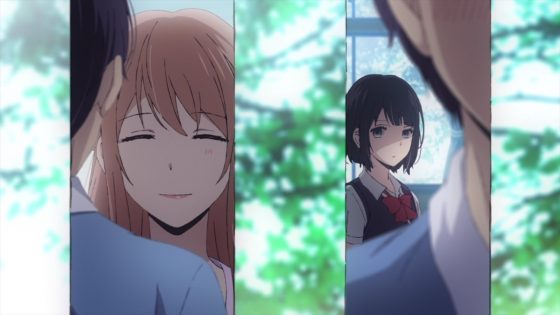 As the show progresses we see more characters tied together by the pain of affections not returned. The reasons for those affections and the borders they cross. The show speaks to me in ways I can’t explain having been through similar scenarios myself and while it might be a bit intense for some viewers, it’s the courage to be so daringly intense that kept me watching the first time around, as the story unfolded and characters developed. There are some pretty shady motivations for character’s actions that simply rub me the wrong way and some really trash personalities, but they are portrayed superbly I can’t help but give them points for realism, the series pushes some boundaries when a homosexual character is introduced and plays with the idea of sex as a trade for comfort and affection, which ts done fabulously and I have to applaud them for the courage to present these scenarios to the watcher, halfway through the series I expect watchers to be yelling and/or crying about some of the scenes but by the end I expect them to feel contented in a way as even I couldn’t fully hate the worst character in the series as she did manage some growth before the series conclusion.

The art style is gorgeous, it plays out like a visual novel with art stills of classrooms, landscapes and character closeups overlaying some of the scenes for a more dramatic effect, from the sakura petals falling in the soft breeze, to the level of detail in background artwork. The blu ray seeks only to thrust the near perfect clarity right at your face, from sweat beads trickling down a face and across the small of the neck, to dust particles falling slowly in the still air, to the sway of hair in the wind or as they walk. It has a charming roughness in the form of sharp lines you find in manga, the producers also mixed things up by adding softer and smoother features in places like eyes and hair, rather than going for bold, bright colours they chose darker, softer shades, like deep purple as ash blonde, it brings a great contrast to the screen. As contradictory as it all sounds, it somehow all comes together really well.

The audio is a little hit and miss however. Having watched the series in SD with Japanese voice actors, I can’t say I noticed a significant change in the Blu Ray variant. The English voice actors however, if I may be so harsh, just don’t feel right, maybe it’s because I’ve acclimated to the JP voices, but they just don’t sit right with me, they seem a little too uppity for the series rather drab and dreary feel. Even the JP voices while fitting and well voiced don’t particularly stand out amongst some of voice acts I’ve heard in similar slower, darker narratives before, there just seems to be a kind of oomph that is lacking from the quality of lines delivered. The music and ambient SFX stand out here, the rustling of the trees, the whirl of the breeze, the clatter of footsteps, the music is also really sombre and sad, but then incredibly deep at the same time, most scenes of intense emotion are made even deeper by the near perfect soundtrack that accompanies it, it’s only downside is that the soundtrack seems to be a bit small in musical numbers so some tracks are reused to lesser effects once you’ve heard them a few times.

The Blu Ray doesn’t have any special features except the textless versions of the opening and ending tracks to the series, which a bit of a shame but the norm for niche series’ like these. As a whole though I would still say that the blu ray is worth upgrading to if you can afford it as it noticeably improves visuals and music. The series itself fits into a bit niche market when compared to the stark contrast in many of it’s slice of life opposites however it’s an underrated jewel for sure, if you like darker romances then Scum’s Wish is for you. 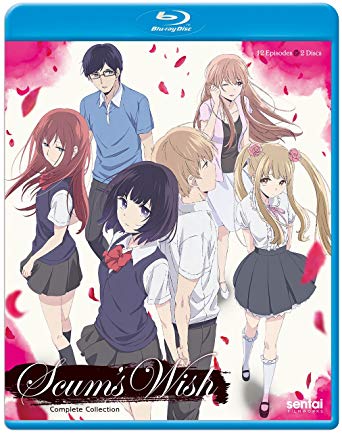