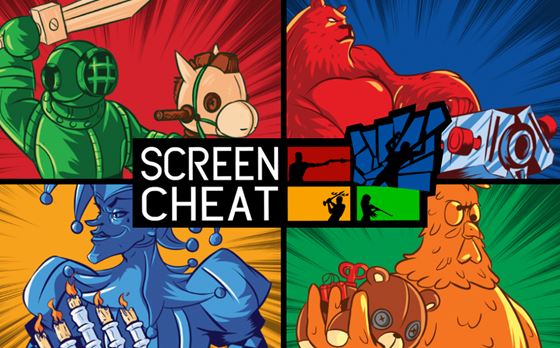 Developer Samurai Punk and indie label Surprise Attack Games today announced that Screencheat, the chaotic party split-screen FPS where everyone is invisible, will release on PlayStation4 and Xbox One on Tuesday March 1st, 2016.

Screencheat is the ridiculous split-screen shooter where everyone is invisible so you have to “screencheat” (Screencheat – verb: to look at your opponent’s screens. “Stop screencheating you cheater!”). Supporting local and online play for 2-8 players, Screencheat’s off-the-wall arsenal of one-hit kill weapons include a hobby horse, a car engine that shoots bouncing plasma balls and a teddy bear loaded with explosives.

Originally launched in October 2014, the wait will be worth it for console gamers, as the PlayStation4 and Xbox One versions will launch with the avalanche of content developed over the last year including eight player support, AI Bots, 6 new maps, 2 new weapons and new modes including team variants. Samurai Punk have also added a ridiculously granular level of customisation options which allow players to create and save their own crazy game modes. Players are able to progress and level up through playing to unlock ragdolls, mutators and weapon skins.

HIGHLIGHTS:
• Screencheat launching on PlayStation 4 and Xbox One on March 1st
• Ridiculous split screen shooter where everyone is invisible
• Local and online multiplayer
• More than double the content of the original PC release
• Developed by Samurai Punk and published by Surprise Attack Games

Samurai Punk is a small Melbourne-based independent game developer that creates games with love and care for people who want to play them.

Surprise Attack Games is an independent games label focused on partnering with independent game developers to provide marketing, distribution, and strategic assistance in taking their games to global audiences on any and all game platforms.

Launched in July 2013, Surprise Attack Games is part of Surprise Attack Pty Ltd. Its sister company, Surprise Attack Consulting is a games-specialist marketing and PR agency working primarily for games and game-related companies wanting on the ground expertise in the Australian and New Zealand markets.