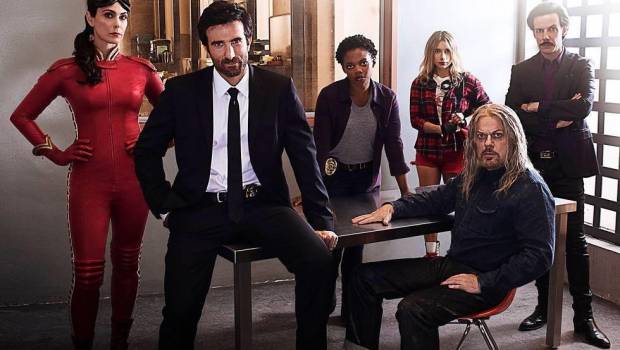 Thursday, November 30, 2017 – Via Vision Entertainment is thrilled to announce the release of Powers. Season 1 of the PlayStation Network original scripted series arrives on Blu-ray and DVD January 3.

Starring Noah Taylor, Eddie Izzard, Michael Madsen, Sharlto Copley and Susan Heyward, Powers explores a world in which humans co-exist with people enhanced by super natural abilities. These enhancements, however, don’t inspire acts of benevolence and heroism, but rather mischief, crime and endorsement deals. These superhumans are worshipped by mortals who have become subservient through their awe and fear. The show takes its title after the Powers Division, an elite group of cops with some abilities themselves, who are charged with the responsibility of keeping the peace but mostly policing the superhumans.

Based on the acclaimed graphic novel by Michael Avon Oeming and Brian Michael Bendis, Powers follows detectives Christian Walker (Copley) and Deena Pilgrim (Heyward) as they investigate links between a new drug and a series of murders. Screen Connections calls it “an entertaining, gritty and blood soaked look at a world overwhelmed by people with powers that disturbingly reflects our own in a number of aspects.” Yahoo TV raves. “Powers gives you the slam-bang super-hero action you want,” adding, “as well as the hard-boiled tone many cop shows aim for and seldom attain.”