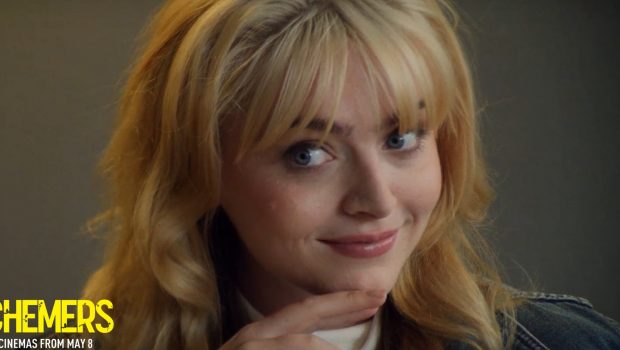 Summary: "Based on a true story" is a bit of a stretch, but still fun enough and look back into an era of promotion that didn't involve sitting on the computer all day.

The early days of famous promoter Dave McLean who managed Placebo and booked many big gigs in his time are show here with young Davie played by Conor Berry and his two friends Scot and John played by Sean Connor and Grant Robert Keelan respectively.

Due to being a lad in his home town and being beaten up by local toughs Davie ends up in hospital with a broken leg and falls hard for student nurse Shona (Tara Lee). Seeing her later in the university library she calls his bluff when he asks her out so Davie decides to put on a disco to try and impress her leading to the events of the story and booking Iron Maiden which is their first “big” gig.

While it says “based on a true story” I doubt all this happened in the time it took for Davie’s broken leg to heal, that is too many bands to have through in such a short period. Also as always happens in these stories several people would have either been changed around or condensed into one person.

The ending is all romantic and stuff but what actually happened is Davie pissed all the money up against the wall (in his own words) and ended up leaving for London. He did try and book Bruce Springsteen while he was on the dole living in a bedsit after.

The actors are great in this especially Tara Lee and Paula Masterton (Anna) and a lot of the roles are filled by actors from Dundee which makes it more authentic as they understand what it was like growing up in the city. Shona seems to be the voice of reason to Davie’s ego and Anna knows what is going on from the next room and that her partner John has been “borrowing” from their holiday fund all along.

There is a lot of fun to be had here. While there is music in the movie, there is not really any footage of the actual bands but you do not really notice that as much as it is about what goes on to get the band onto the stage and get the punters in.

I am not sure they could make a movie like this in the 2020s as it would just be sitting on their computer doing admin and posting event listings to Facebook. There are not really even gig posters these days unless the venue goes out of their way to make them.

For anyone who remembers the music scene from the 1980s this will be a fond look back. If you are too young to remember or were not born then it will be an insight into an earlier time, just don’t expect it to be the 100% truth of what happened.

Well worth your time and a fun movie to watch if you are a fan of music and promotions.