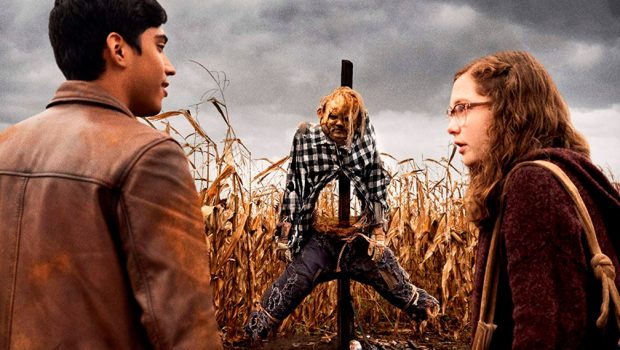 Scary Stories To Tell In The Dark – Film Review

Before he died in 1992, American author Alvin Schwartz published over fifty books. Many of these were children’s books that borrowed from classic folklore and explored clever wordplay. Shakespeare, T.S. Elliot, and Mark Twain were said to be Schwartz’s inspirations. His most famous work included the Scary Stories to Tell in the Dark collection, which was first published in the 1980s. It comprised three volumes of short horror stories for children. The books have become the most divisive works in American schools. Some have hailed them as important cultural staples, while conservative parents believe they glorify violence and satanism.

In a Chicago Tribune article, one of the book’s defenders said the stories help children face their fears and that right-wing groups resent the supernatural elements. This is not uncommon in modern American culture. Recently, a school in Nashville banned the Harry Potter books because they believed they were conjuring evil spirits. Controversies aside, the Scary Stories collection sold seven million copies by 2017, meaning it made a sizable impression. These results would have been pivotal for Hollywood heavyweights desperate to keep increasingly sophisticated teenage audiences in cinemas and away from streaming services. Few Hollywood players are currently bigger and more influential than Guillermo del Toro. He produced this mediocre adaptation and shares a story credit. It would have undoubtedly been stronger if he directed it himself. Instead, he hired Norwegian filmmaker André Øvredal (Trollhunter; The Autopsy of Jane Doe) to helm the movie. While working from a screenplay by Dan and Kevin Hageman, he fails to impose a unique stamp on the project. 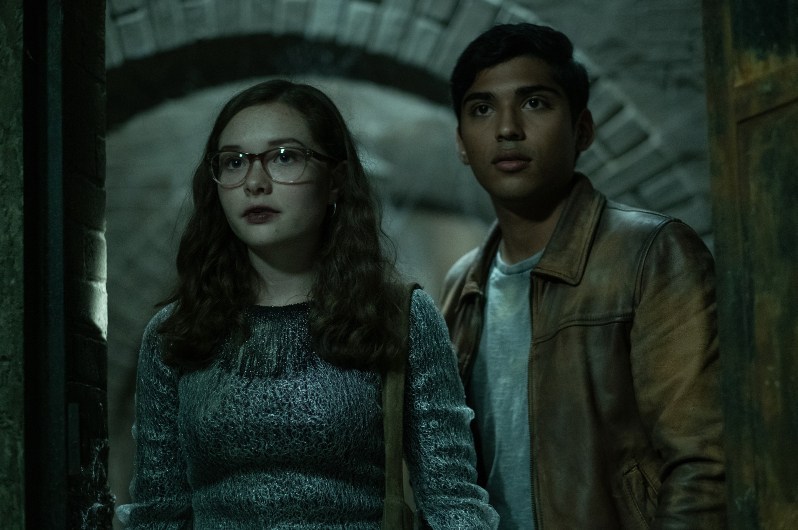 The film is set in 1968, when Richard Nixon is prominent, and drive-ins are a popular way of watching movies. The main characters are a group of school friends who are dressed for Halloween. Stella (Zoe Margaret Colletti) lives at home with only her father, Roy (Dean Norris), because her mother has passed away. Her buddies are Auggie (Gabriel Rush) and Chuck (Austin Zajur). Chuck’s sister, Ruth (Natalie Ganzhorn), is dating the local bully, Tommy (Austin Abrams), and when their date is disrupted by the trio, Tommy pursues them. They try hiding in a drive-in and sneak into the car of Ramon (Michael Garza). As an immigrant, he is trying to keep a low profile but reluctantly helps the group. They evade Tommy by hiding inside an old gothic mansion. Inside, they discover strange rooms and a deadly book. They realise that the book is writing chapters by itself and pre-empting deaths of people they know. They cannot return the book or destroy it and realise they too are in danger. 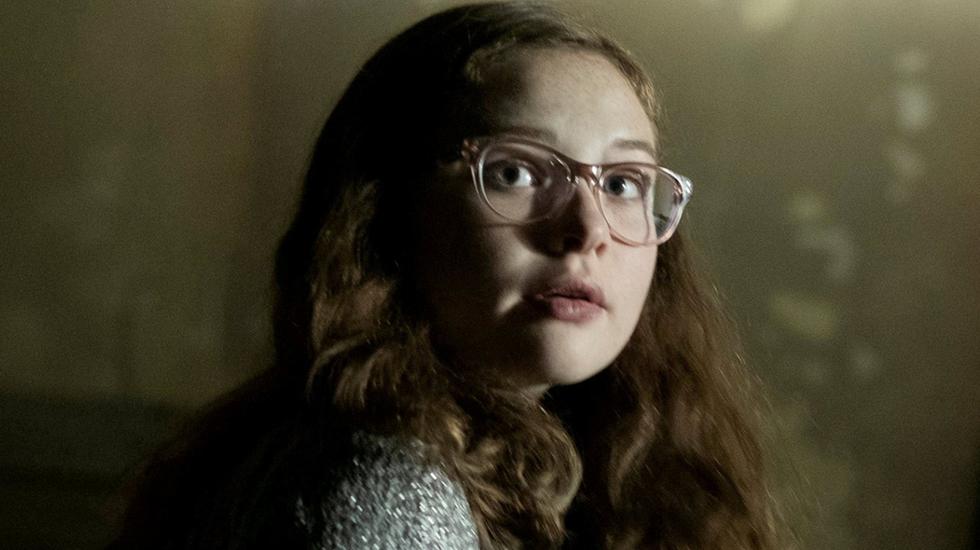 The first misstep in Stories’ screenplay is the illustration of its characters. Auggie, Chuck, and Stella are stereotypes who can be labelled as ‘the smart preppy one’, ‘the troublemaker’, and ‘the geek girl’, respectively. The same is true regarding the side characters. Briefly, Tommy is a ‘movie bully’ complete with a baseball jacket and Ruth resembles a high school beauty queen. Meanwhile, Ramon is a dull leading man who has a tiny slice of tragic backstory shared with us. None of the adult characters are well rounded. These outlines are filtered through situations too derivative of similar texts. The film resembles an average Goosebumps story but also supernatural television shows, including Stranger Things and The Chilling Adventures of Sabrina minus the strong writing, characterisations, and imagination. Supernatural shows have reached a high bar that a weak imitation is immediately noticeable. 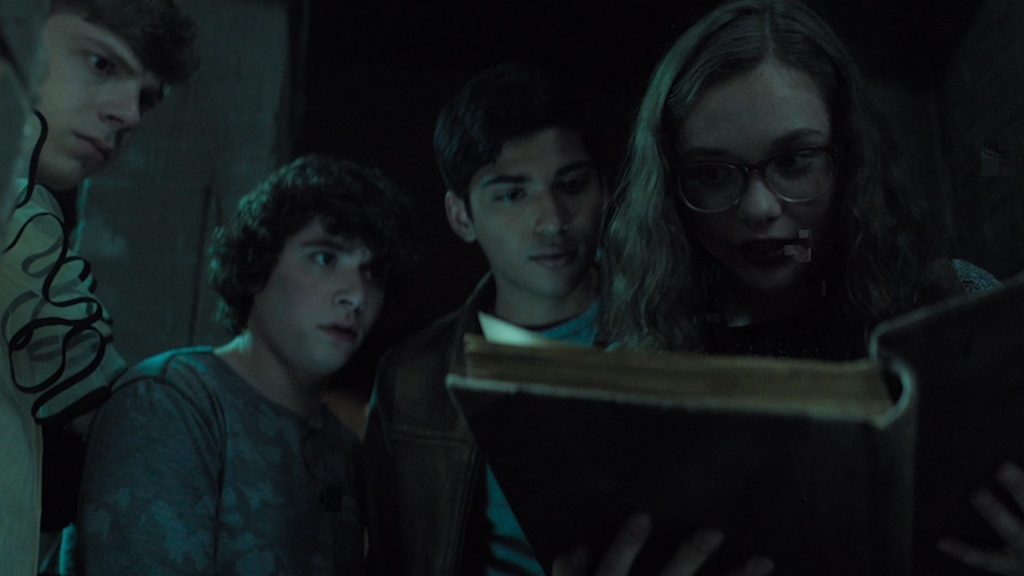 The narrative forgoes gripping rhythms in favour of loosely connected set pieces. There are a handful of monsters, including a killer scarecrow, but nothing is devastatingly macabre. At worst, there is a soup with a toe in it. The writing also fails to stitch the set pieces together convincingly. There is a sequence in a school where the group knows exactly which level a friend is on to rescue them. In another cringing moment, a set of keys on a cop are flashed before the camera. You will never guess how Stella and Ramond escape a gaol cell in time. Between the horror set pieces, the film attempts comedy, a romance that leads nowhere, film nostalgia, and politics. The political tension includes seeing Nixon on television screens and racists writing the slur ‘wetback’ on Ramon’s car. It amounts to a highly conventional idea that people are as monstrous as the ghouls. There is also a cliché backstory involving a terrible incident that happened involving the people from the mansion. The content feels too meek and derivative of other shows and movies and doesn’t justify the criticism of the books. 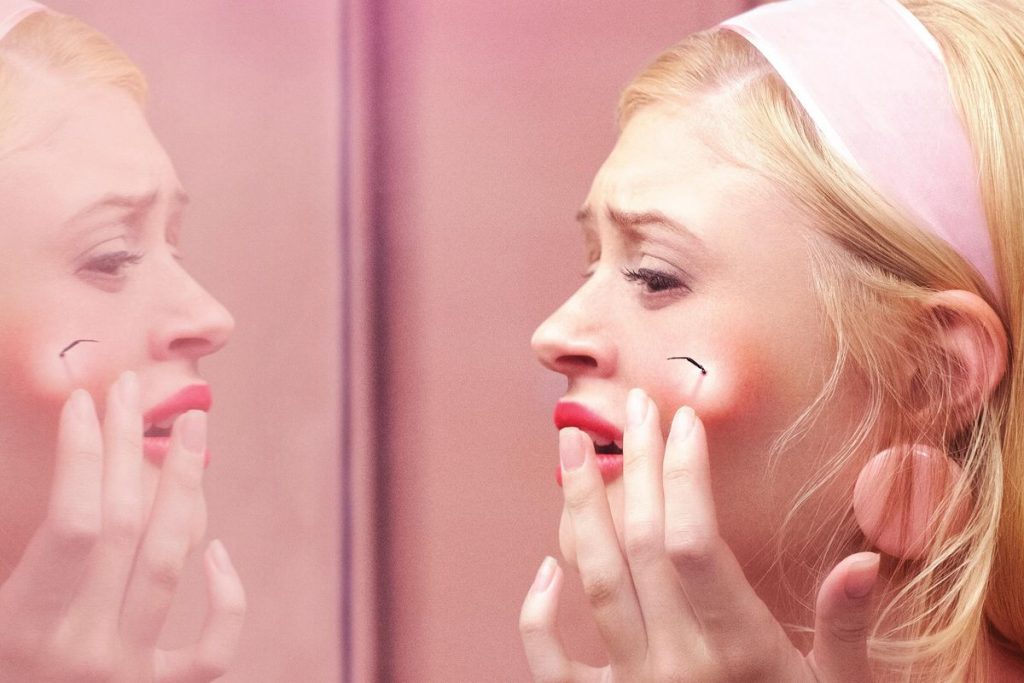 As for chills, Stories is not frightening at all. Its undaunting form is attributable to the cliché way the characters have been developed and a series of generic audio-visual choices made by Øvredal. Too often he relies on silences followed by a booming sound effect for chills. As The Conjuring films proved, the repetition of this ‘jump scare’ technique blunts its impact. One of the few memorable images has been revealed on the film’s poster, which is a spider’s leg protruding from Ruth’s cheek. The image’s creepiness is undone by devolving into computer graphics. There are also lighting issues, specifically the early mansion scene where the rooms are so dim that it is hard to see what is happening. One can imagine Del Toro’s visual panache would have utilised darkness and shadows with greater artistry and without sacrificing visibility. Overall, the film’s worst trait isn’t that its disinteresting and tame. It is the ending, which signposts a sequel rather than resolving the fates of key characters. Given how overly commercial the rest of the film is, the shameless finale should not be a complete shock.

Summary: The content feels too meek and derivative of other shows and movies and doesn’t justify the criticism of the books.