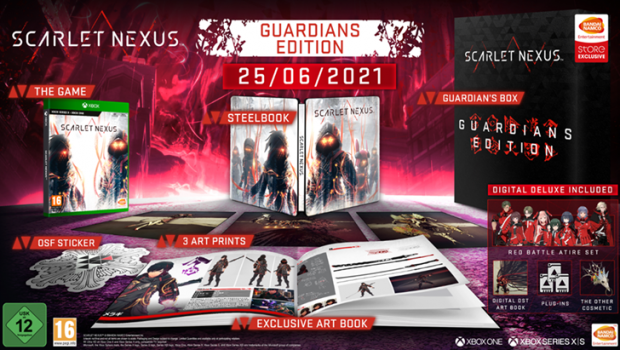 Featuring a dual story, begin your adventure with either Yuito Sumeragi, an energetic recruit from a prestigious political family, or Kasane Randall, the mysterious scout whose power and skill has gained great notoriety among the OSF. As their different experiences interweave with each other, it is only then that you will reveal the full story and unlock all the mysteries of SCARLET NEXUS caught between technology and psychic abilities.

Check out the latest trailer revealing a bit more about Kasane and her party members, as well as the teaser of the upcoming SCARLET NEXUS animation series produced by Sunrise: https://youtu.be/-FUCGHBjqXc

SCARLET NEXUS will be available in Standard, Deluxe and Guardian editions with an early purchase bonus – available to pre-order on digital stores and with participating retailers only.

SCARLET NEXUS game, 3 Art Prints, a hardcover Art Book, OSF Sticker, a steel book and all the digital items from the Deluxe Edition.