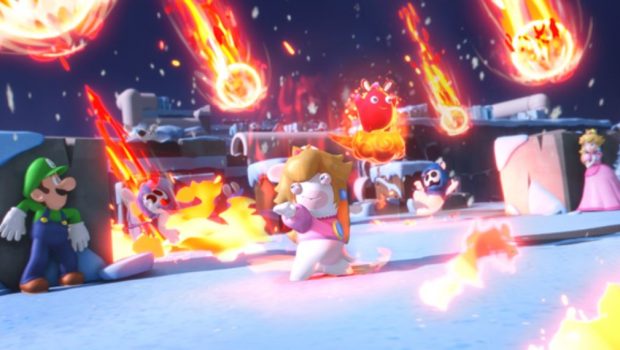 SAVE THE GALAXY IN MARIO + RABBIDS SPARKS OF HOPE, AVAILABLE NOW

Players will join Mario and the Rabbid Heroes as they take on Cursa, a malevolent cosmic entity who wishes to plunge the galaxy into chaos. Determined to consume all the energy in the universe, Cursa and its minions are hunting the Sparks, uncanny creatures formed by the fusion of Lumas & Rabbids, and will destroy all who stand in their way. In their quest to save the galaxy, our Heroes will travel and explore a variety of planets filled with strange inhabitants and hilarious secrets, and will be joined by a colorful cast of characters, including Rabbid Rosalina and even a long-time enemy: Bowser!

Mixing turn-based tactics and real time action, Mario + Rabbids Sparks of Hope’s innovative combat system will have players use their Heroes to dash at enemies, team jump on allies, hide behind cover, or take advantage of their special abilities in order to get the most out of every turn.  With its unique gameplay, Mario + Rabbids Sparks of Hope will be an epic and fun tactical adventure for new players and experts of the genre alike.

Players will have to locate and save the Sparks to have them join the adventure, opening up new tactical possibilities to help the Heroes get the upper hand in battles. In addition to leveling up and customizing their Heroes, players will have the opportunity to pair them with Sparks to unlock additional abilities! They all have distinct powers and personalities, ranging from energy shields to powerful elemental attacks.

This epic quest to save the universe is supported by a talented cast of composers, including legendary Japanese composer Yoko Shimomura and the multi-awarded composer Gareth Coker. Acclaimed British video game composer Grant Kirkhope also returns to the franchise, after masterfully scoring Mario + Rabbids Kingdom Battle. The original soundtrack will be available worldwide on October 21st on all major streaming services. For more information, please visit https://ubisoftmusic.lnk.to/MBSOH_OGS.

Mario + Rabbids Sparks of Hope is available in three editions, Standard, Cosmic and Gold, on Nintendo Switch™ exclusively. The Gold Edition will include the Season Pass for players who wish to extend their adventures. For more information about those editions, please visit the Ubisoft Store.