Save The Ninja Clan Review

Summary: Remember when platform games got you so hooked you wanted to keep going even after the character dies dozens of times? Well here we go again. Save The Ninja Clan

There’s two types of people out there: those who enjoy really difficult games… and those who don’t. I typically fall into the latter category (perceiving games as escapism). So please take this review with a grain of salt on my seaweed salad. (Ninja pun.) Sometimes You’s ‘Save the Ninja Clan’ is a well-crafted, uber challenging platformer, one unabashed in that it wants you to die. A lot. So much so, there’s trophies awarded to the amount of times one reaches his/her demise. (No one should hit 50 that quickly!)

Similarly, passing a level produces a simultaneously horrifying but also hysterical replay of all the places one died while completing said level. When you die upwards of 25 times in 10 minutes, a catharsis ensues watching all the previous missteps…while noting they are thankfully in the rear-view mirror. Not surprisingly, there are death stats. Numbers, types, kills for and against. Prepare to die in seemingly infinite ways. 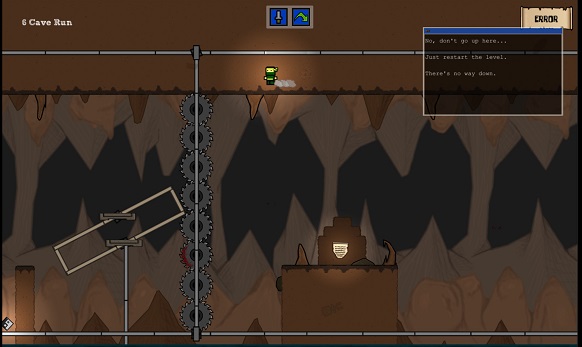 Save the Ninja Clan harkens back to another ridiculously hard ninja platformer, N+, likewise designed for small snippets and speed running. Unlike N+, Save the Ninja Clan sports a cartoony look/feel, the controls also slightly less responsive. Meaning, it’s a lot cuter to play, but also a whole lot easier to die from failed jump attempts.

In all fairness, however, Save the Ninja Clan does allow chaotic self-rescue attempts via double jumps. Thus, even when all goes to heck quickly, a very skilled player can improvise (albeit with the tiniest of error margins) his/her way out of chaos. The one caveat – per above – is while the Steam version of Save the Ninja Clan is designed to play with an XBOX One controller (which I possess), actual jump execution is laggy even via this method.

Moreover, the enemies cheat via eyes behind their heads. Regardless of where your ninja buddy lands, opposing bad guys will find you first, and – in most instances – end a level attempt if you didn’t pick ‘em off from a distance. Sure, this nuance adds to the challenge factor. But having the baddies roam a bit would liven things up also feel less scripted. 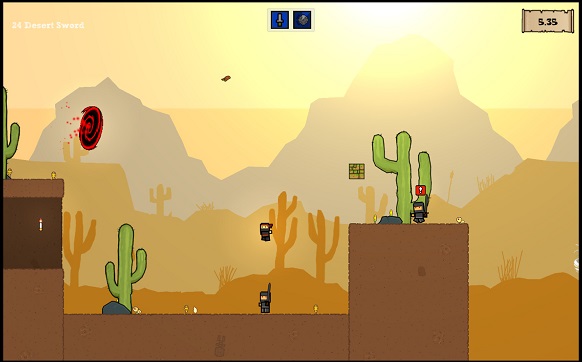 Related, level designs are fun but frustrating. Unlike N+, Save the Ninja Clan doesn’t provide ‘aha!’ moments when finally figuring out how to beat a level. More so, as stated, a sense of relief, on to the next one (now playable), knowing success a sequence of not being beaten by unforgiving elements and adversaries than using the old noggin’. I’m likewise not the biggest of fans in that upgrade scrolls (for increased capabilities) only stick if they’re grabbed sans death on that attempt. Maybe some will find it incentive to replay a level for that elusive, perfect play through. I’m not that guy.

Before the above is perceived as a whole lot of hate for a $1 title, let me return to the opening paragraph. If you’re a gamer who enjoys a highest level challenge, then you’re apt to have a different experience.

Also, there’s so much TLC in this, it’s hard even for non-speed runners to fail to appreciate Save the Ninja Clan. Console ‘error’ messages pop up when wandering into ‘hidden’ places. Also, those little ninjas are just so cute! Everything about Save the Ninja Clan feels like a labor of love. Well, except maybe the plot…which consists solely of ninja buddies getting kidnapped, so…. you die infinite times trying to save them. Well, can’t win ‘em all. It’s a buck, people. 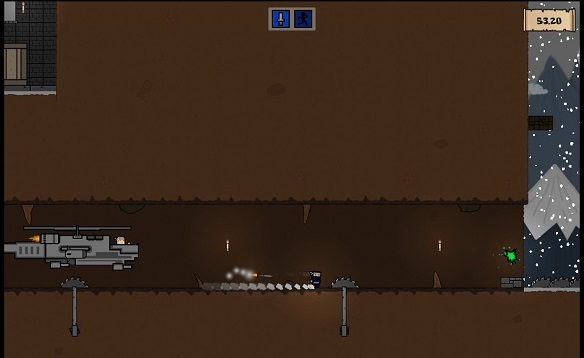 It’s hard, it’s a bit laggy, but keeps you coming back for more. Sometimes you’re fighting the game, but not enough to declare it unenjoyable. Save the Ninja Clan highly recommends a controller. I couldn’t imagine playing without one.

Simplistic, but cute. They won’t wow you by any means, but probably one of the nicer speed running games on the market. I suppose getting chopped up by spinning blades looks pretty snazzy…?

A darn good game for a buck. Save the Ninja Clan is perfect for a 5-10-minute session. Speed runners even more.