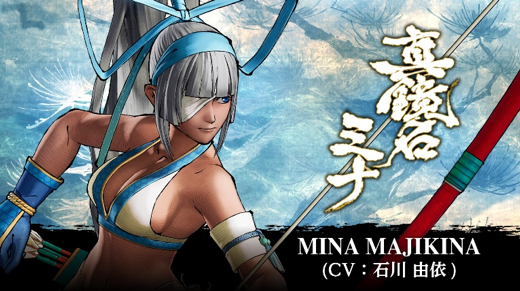 SNK CORPORATION CORPORATION (Corporate HQ: Suita-city, Osaka, Japan, Company President & CEO: Koichi Toyama) is pleased to announce that the first character for the second season of “SAMURAI SHODOWN” is MINA MAJIKINA and that she will be available to download on February 26th for the PlayStation®4, Xbox One, and Nintendo SwitchTM consoles.

*For European players, she will be available on February 27th for Xbox One and the Nintendo Switch, and on March 2nd for PlayStation®4 consoles.

A powerful exorcist hailing from Ryukyu.
Mina, now a battle-worn warrior, travels the lands plagued by an intense darkness growing within her. Due to the never-ending pain brought on by this darkness, she is unable to wield her bow with the same ferocity as in the past. A new blade has been affixed to her bow, and she has perfected a unique new fighting style that combines both close range and long-range attacks. Though the darkness slowly consumes her aching heart, her arrows, propelled by the sheer will to survive, never miss their target even on the blackest of nights.