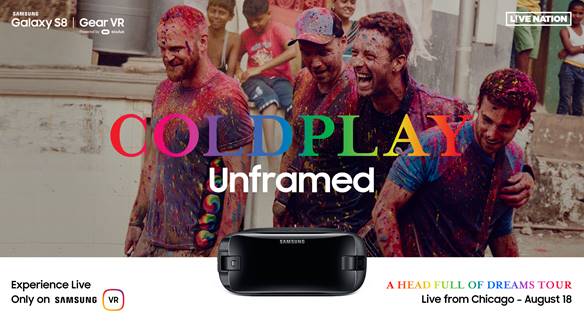 Sydney, Australia – August 16, 2017 – Samsung Electronics and Live Nation will broadcast Coldplay’s “A Head Full of Dreams Tour” live in virtual reality from Chicago’s Soldier Field for the first time ever. Australian fans will be transported to the best seats in the house to experience the band’s electrifying performance from a totally new and immersive perspective. The live broadcast will be available on Samsung Gear VR powered by Oculus through the Samsung VR service on August 18, starting at 11:30 am AEST.

From the pyrotechnics, to the laser lights and the phenomenal setlist, Gear VR users in more than 50 countries, including Australia will be able to experience the magic of Coldplay’s performance at no additional cost. To tune-in, consumers will need a Gear VR headset with a compatible Samsung smartphone, and navigate to the Samsung VR service.* A concert replay will also be available on Samsung VR for a limited time.

“We’re incredibly excited to offer our Australian customers with the ability to immerse themselves in such a great event as it happens half way around the world. Just a few years ago something like this would have been almost inconceivable but is now available to anyone utilising our Samsung Gear VR with a compatible Samsung smartphone.” said Garry McGregor, Sales Director, IT and Mobile, Samsung Electronics Australia.

Coldplay’s “A Head Full Of Dreams Tour,” produced by Live Nation, is the No. 5 highest grossing tour of all time, according to ticket sales data reported to Billboard Boxscore. Launching in March of 2016, The “A Head Full of Dreams Tour” has welcomed 5 million people.

A Head Full of Dreams is Coldplay’s seventh album and the follow-up to 2014’s GRAMMY®-nominated Ghost Stories.