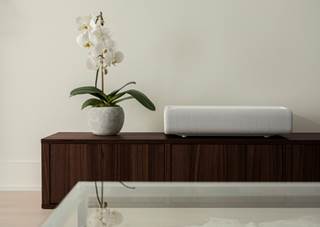 Samsung Electronics Australia has announced the release of its all new 4K Ultra Short Throw laser projector, The Premiere – providing Australians with a big picture cinematic experience in the comfort of their own home.

The Premiere will be available in 2 models; the LSP7T single laser projector offering up to 120-inch screen size and the LSP9T which boasts triple laser technology with an up to 130 inch image size.¹

The Premiere LSP9T is the world’s first HDR10+ certified projector, delivering revolutionary contrast and detail from bright and dark scenes with a peak brightness of up to 2,800 ANSI lumens².

“It’s no secret that Australians want the ultimate in-home entertainment and big screen experience. The Premiere offers a massive 130-inchesof 4K picture quality from its innovative ultra-short throw triple laser projection technology, recreating the experience of the movies at home. With its compact design and big sound, if you’re looking for a truly cinematic experience this is the ideal projector for your theatre or living room.”

“We’re committed to providing Australians with a rich and diverse portfolio of AV products that meet the changing tastes and experiences of households – we’re excited to revolutionise the projector category with The Premiere,” said Hass Mahdi, Director of AV, Samsung Australia.

With its ultra-short throw laser technology, The Premiere can be positioned up close to the wall1 – allowing the sleek and compact design to neatly fit into a living room arrangement, and also allow for the unit to be moved easily away from the wall to adjust the screen size. Setup is quick and easy with no obtrusive installations.

With 2,200 lumens of brightness in the LSP7T and 2,800 in the LSP9T, The Premiere delivers incredible brightness with defining detail.2 The Premiere also supports Filmmaker Mode – the first of its kind for a projector – which helps remove motion smoothing and other post-processing treatments allowing Aussies to watch movies as the creators intended.

While The Premiere is bright and versatile enough to be used on a white wall in a semi-lit room, for the best picture quality experience it’s recommended to be paired with a CLR projection screen from Elite Screens.⁴ Using a CLR screen designed for ultra-short throw projectors absorbs ambient light while also reduces ceiling reflections, thus maximising the contrast and clarity of the image for the best experience possible.

Designed to fit seamlessly into your space with its premium and compact design, The Premiere looks great even when it is switched off, with no black screen left behind. The textile finish by Kvadrat delivers a stylish and minimalist design that blends into a variety of living room settings and arrangements.

The Premiere also comes with Samsung’s built-in voice assistant Bixby and Amazon’s Alexa, allowing you to control the projector using only your voice.⁵ While Samsung’s built-in Game Mode takes gaming action to a new level delivering smooth images and lightning-fast motion, minimising input lag so you can immerse yourself in the action on the big screen.

The Premiere builds on Samsung’s expanding range of lifestyle TVs, including the newly released outdoor TV, The Terrace along with The Frame, The Serif and The Sero.

The Premiere is available from today at leading retailers and online at www.samsung.com.au