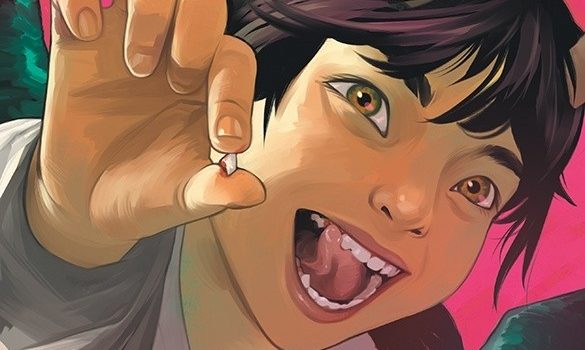 Summary: Highly, highly recommended, with the caveat that some of the gore, graphic nudity and sex scenes may be a bit much for some, but it’s not like somebody is going to have this as their starting point for Saga and, as such, readers should already be fully aware of how batsh*t crazy things can get in the pages of this delightful little series.

Saga is, for my money, hands down the best thing that Brian K. Vaughan (Ex Machina, Runaways) has ever been involved in, and this is coming from someone who counts ‘Y: The Last Man’ among the acknowledged classics of both the medium of comic books and literature as a whole.

At its core, Saga is the simple story of a young family and their struggle to retain their familial unit structure amidst the backdrop of two warring factions searching for them due to the forbidden nature of their love – Marko and Alana may be tethered by the heart but the animosity between their two races and the stigma associated with forming a relationship with the enemy constantly threaten to tear them apart.

Their dalliance not only made them both fugitives on the run from either side of the conflict but also resulted in the birth of their daughter Hazel, rounding out the aforementioned centre of the family unit and adding a new dynamic to the couple by forcing them to prioritise their child over what could be considered easy routes to their own personal happiness.

Without tapping out lengthy synopses for the preceding six trades, the story here picks up with Marko, Alana and their ragtag crew landing on Phang, a comet that has been ravaged by years and years of conflict between Landfall and Wreath concerning its ownership. Of course, there are other forces at work that conspire against Marko and Alana’s happiness, such as the ever encroaching looming shadow of The Will, but ultimately these six opening issues are fairly self contained and heavily focused on the family’s trials and tribulations upon the comet. 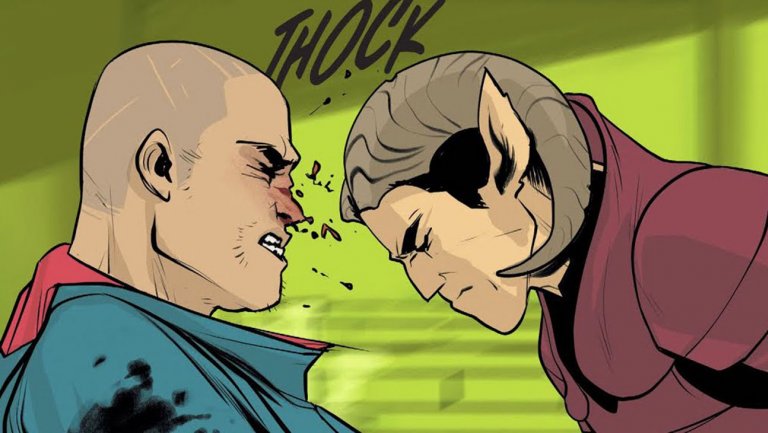 Ending with what is genuinely the most heartbreaking series of pages I’ve ever read, this opening arc stabs you in the chest and pulls out your heart, better preparing you for the immensely overwhelming plot developments that take place over the next 12 issues… As those final few pages tore apart my soul, I figured that the next few issues would likely be a bit of a palate cleanser but it seems that, despite the still present occasional moments of levity, this trio of Saga story arcs take a bit of a deep dive into emotional waters and the heartbreaking climax to the family’s little side trip to Phang was merely the tip of the iceberg when it comes to emotional gutpunches.

As if to accentuate the more morbid angle, Saga’s eighth story arc opens on a dusty little town renowned for performing abortions, finding some dark humour in what was a fairly dark plot point left hanging from the previous arc. As the arc continues we see a lot of loose threads from the previous arcs start to coalesce, as well as the introduction of a heartbreakingly transient character , but it’s the third and final arc contained in this collection that will truly leave your jaw on the floor as your tear ducts stage a revolt.

I don’t want to get into the overarching story of this series of six issues for fear of diminishing the myriad surprises contained within, but suffice to say I was left emotionally drained by the final issue and can honestly see why Vaughan and constant collaborator Fiona Staples had to step away from the series and take a protracted break after this arc, even if the still ongoing wait for new issues has left a massive hole in my weekly pull list. 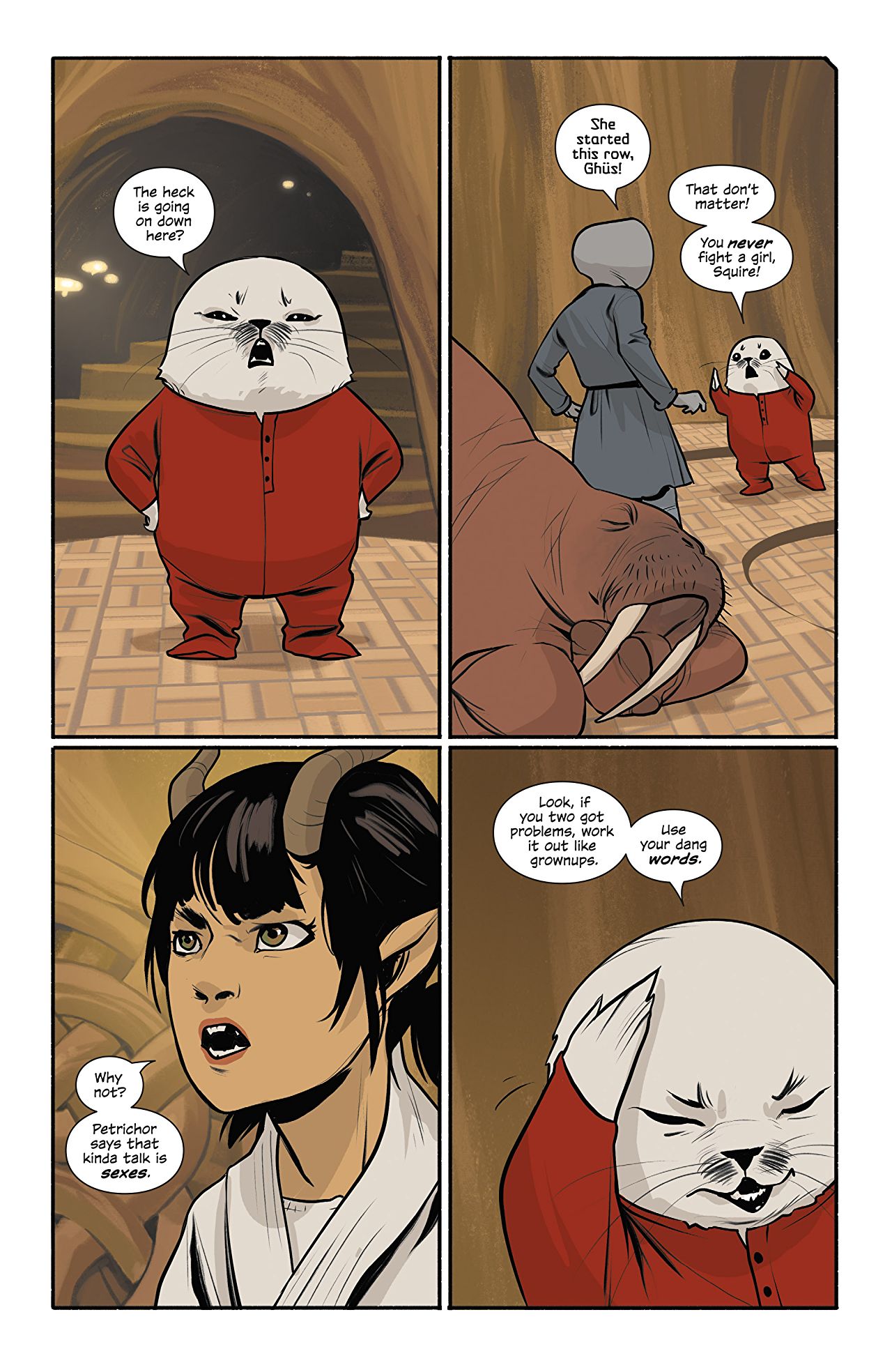 Saga has sometimes been described as the lovechild of Star Wars and Game of Thrones, but honestly I think that such a comparison comes off as kind of lazy and doesn’t come anywhere near doing justice to the vibrant and interconnected world that Brian K. Vaughan has crafted so effortlessly here. The mythology of the series is a fascinating thing to pore over but, at the end of the day, Saga is all about Hazel, her parents and the relationships they forge, often with the most unlikely of candidates.

That the third arc contained in this collection takes such drastic turns in terms of the plot is a testament to Vaughan’s guiding hand and belief in this story and universe he has been building in his mind over the last few decades, and I’m honestly not too sure where the series will go after the events contained within these pages. 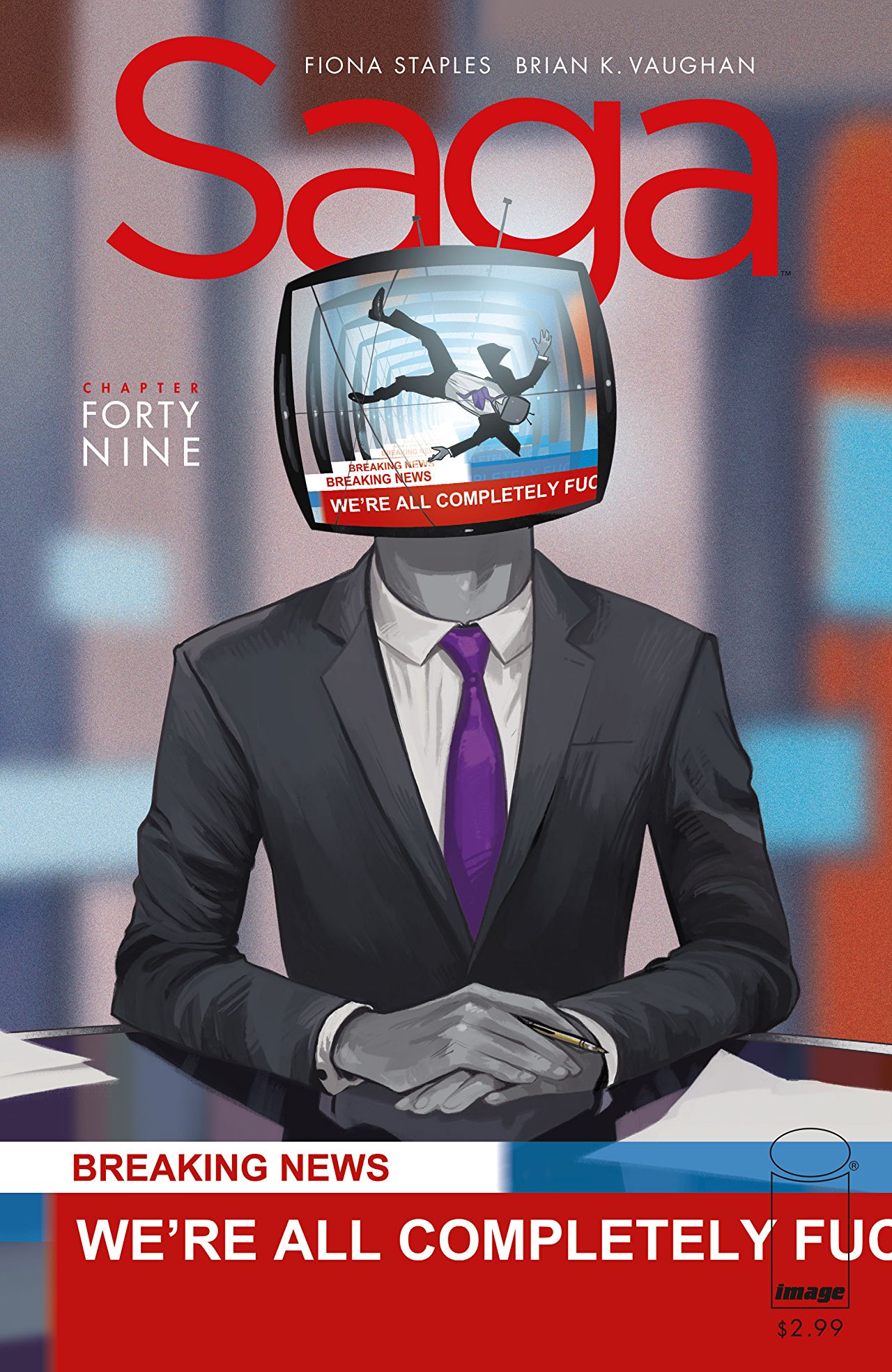 As an added bonus for holding out for the deluxe hardcover collection over individual trades there’s a lengthy look at the gestation and eventual birth of Saga, including insights into the character creation and designs, the script for the first issue and the bringing together of the many disparate elements of Vaughan’s desires into one cohesive and entirely believable universe for Hazel, her family and all manner of anthropomorphic beasts to exist within.

As is probably obvious by the effusive praise I’ve heaped on this release, I wholeheartedly recommend Saga Book 3. Reading through these eighteen issues again was a more emotionally affecting experience than I expected, as somehow knowing certain things were looming on the horizon made the quieter moments all the more poignant. 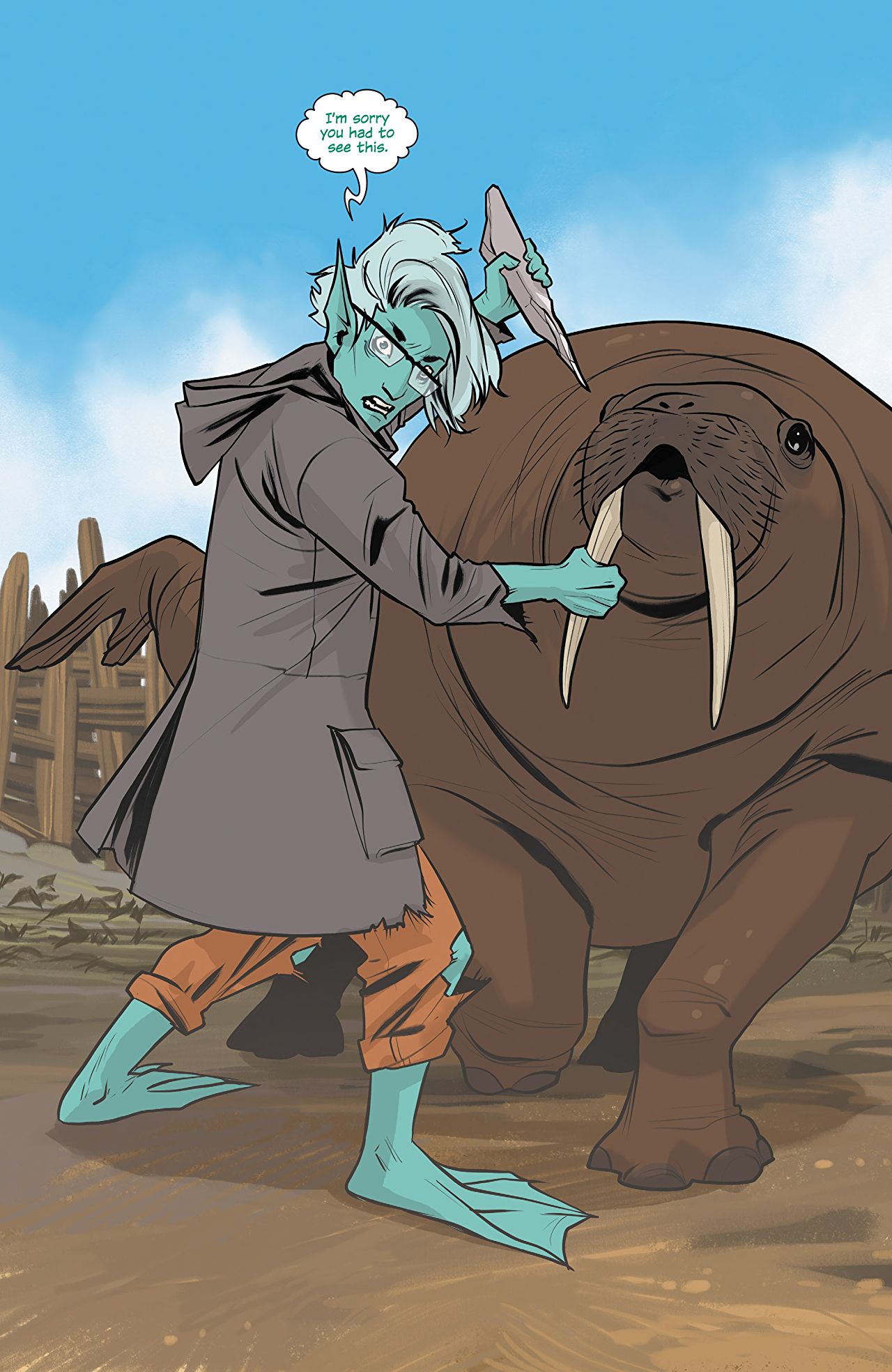 Saga has never been a series to pull its punches and I think that’s where the comparisons to George R.R. Martin’s epic come into play. Nobody is truly safe and so many of my favourite characters have gone through the wringer along the way, but I can honestly say that the issues contained here hit me particularly hard, partially due to Fiona Staple’s intricate and expressive artwork and partially due to Vaughan’s inability to just let my favourite comic book family live their lives in peace. Seriously Brian, you broke my goddamned heart.

But hey, Ghüs is still kicking, so it’s not all doom and gloom.

Highly, highly recommended, with the caveat that some of the gore, graphic nudity and sex scenes may be a bit much for some, but it’s not like somebody is going to have this as their starting point for Saga and, as such, readers should already be fully aware of how batshit crazy things can get in the pages of this delightful little series. 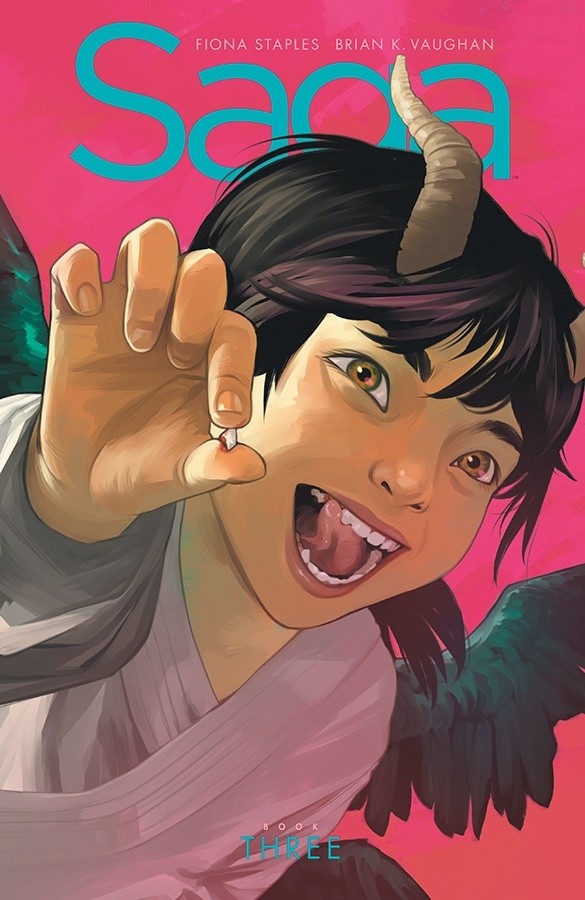