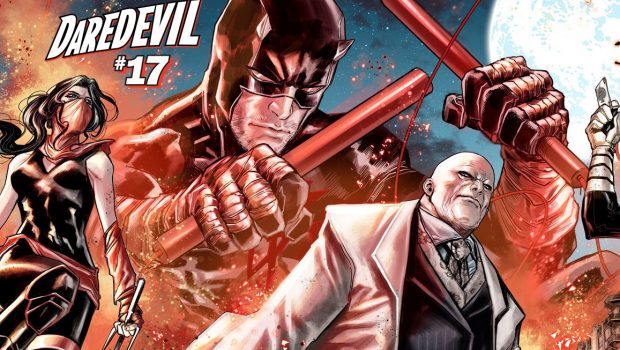 RUNNING WITH THE DEVIL!

It all starts in DAREDEVIL #17, as secrets will be revealed! Blockbuster creators Charles Soule and Ron Garney team to answer the question on everyone’s mind – just how did Matt Murdock regain his secret identity?! Then prepare to delve into the mind of two vile villains in KINGPIN #1 from Matthew Rosenberg (Rocket Raccoon, Civil War II: Kingpin) & Ben Torres (Daredevil) and BULLSEYE #1 from Ed Brisson (Secret Wars Battleworld) and Guillermo Sanna (Deadpool). Finally, Sin City is about to get a new player in ELEKTRA #1 – from writer Matt Owens (Marvel’s Luke Cage) and artist Alec Morgan (Secret Wars Journal)! How long can Elektra escape her past when she runs afoul of Arcade and his new Murderworld?!

Visit Marvel.com For Exciting Creator Interviews on These Upcoming Titles<http://marvel.com/news/group/1127/running_with_the_devil>

“Fans are going to love what we have in store for our street level superstars in 2017,” says Editor-in-Chief Axel Alonso. “We’re taking Daredevil and some of the characters in his orbit, sending them off in different directions for some brand-new stories from rising stars in the comics industry. How long before they all collide? Knowing Matt Murdock – not long. There’s some big things happening in this corner of the Marvel Universe, and these four titles are just the beginning.”

The table is set and the pieces are on the board. As Elektra, Kingpin and Bullseye set off on their own paths, how long before all three come crashing back in to Matt Murdock’s life? This February, take a walk on the dark side when you’re Running With the Devil! For more information on Running With The Devil, visit Marvel.com.

DAREDEVIL #17 Written by CHARLES SOULE with Art and Cover by RON GARNEY On Sale This February!

KINGPIN #1 Written by MATTHEW ROSENBERG with Art by BEN TORRES & Cover by JEFF DEKAL with Connecting Variant by MARCO CHECCHETTO On Sale This February!

BULLSEYE #1 Written by ED BRISSON with Art by GUILLERMO SANNA & Cover by DAVE JOHNSON with Connecting Variant by MARCO CHECCHETTO On Sale This February!

ELEKTRA #1 Written by MATT OWENS with Art by ALEC MORGAN & Cover by ELIZABETH TORQUE with Connecting Variant by MARCO CHECCHETTO On Sale This February! 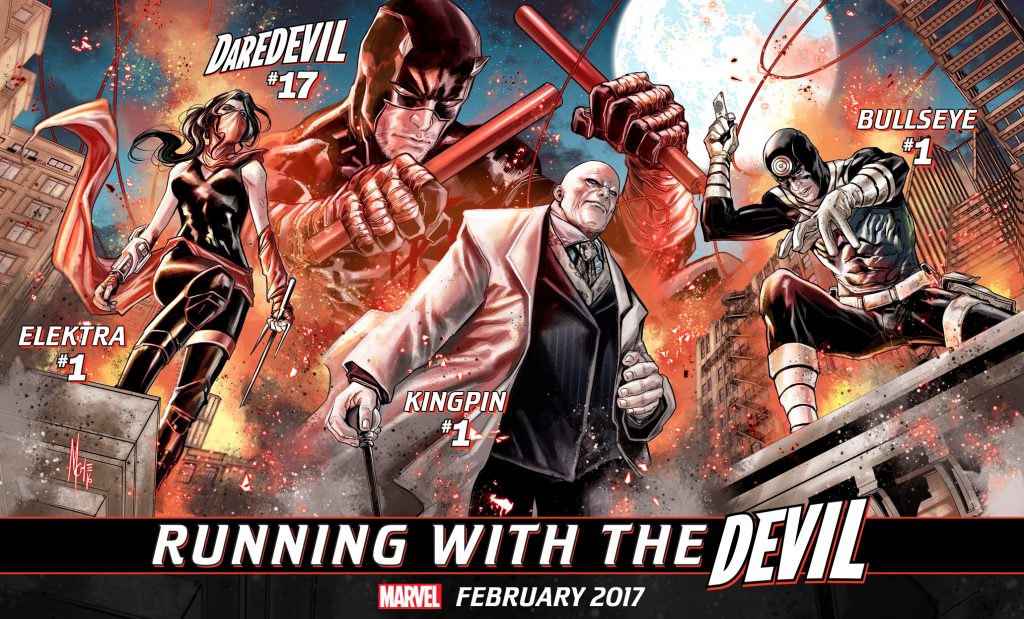