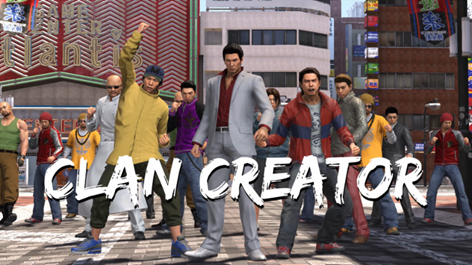 Rule the Streets of Kamurocho and Onomichi with Yakuza 6: The Song of Life Clan Creator Minigame

Gray jacket, red shirt with the collar up and that perfectly styled hair. It’s him, Kazuma Kiryu, the Dragon of Dojima, with a dozen of the strongest men known in Kamurocho. You’ve done your best to put together the strongest team possible in hopes of conquering this territory. Two dozen bodies move, flooding the streets with roundhouse kicks and quick jabs. The wave of men quickly takes your team down and you’ve lost. But you and your men have gained experience, levelled up and will return stronger for another fight, another time. In Yakuza 6: The Song of Life, for the first time, you will be able to command some of the biggest names in Yakuza lore in the Clan Creator minigame when the game releases March 20!

About Yakuza 6: The Song of Life

In Yakuza 6: The Song of Life, Kiryu will find out exactly how much people are willing to sacrifice for family – be those ties through blood or bond – when he investigates a series of shadowy events that involve the ones he holds closest to his heart. He’ll journey to familiar grounds in Kamurocho and the new setting of Onomichi, a beautiful, sleepy port town in Hiroshima Prefecture, in order to find the answers he seeks. Powered by the brand-new Dragon Engine, the game is the ultimate iteration of Yakuza’s blend of gritty crime story, hyper-explosive combat, and all the vices and distractions those locales have to offer.