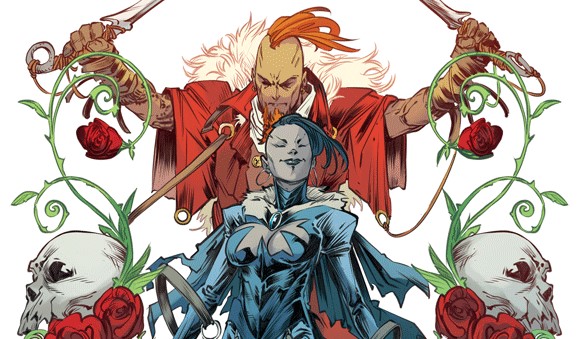 Summary: A revealing chapter in this tale.

The battle is over and Millhaven burns. Queen Drucilla’s army was victorious, with Ila’s capture being the crowning trophy of their conquest. Meanwhile, Rose and Thorne are desperately trying to reach their friends at the site of the battle before it’s too late.

We begin this issue nine years ago in Ttereve, where we see a young Rose frantically running home, as she nurses an injured bird. She is panicking and asking for her mother’s help to save the birds life. Her mother believes that it’s too late for the animal, however, Rose defies her mother and begins to use her healing powers. Worried that someone might see her, her mother whisks her inside away from prying eyes. With the bird saved, and things calm once again, Rose’s mother approaches her, handing her a bracelet, insisting she wears it. This bracelet acts as a protective amulet, obscuring her magical abilities from Queen Drucilla. We then jump even further back, to eleven years ago, where we see a much younger Drucilla arguing with her father over a marriage he has arranged for her. She is angry and embittered towards her father, refusing to be forced into this marriage and the fate that has been bestowed upon her. Her brother tries to reason with her, however, she refuses to listen to him, and in fact becomes more determined than ever to change the course of her fate. 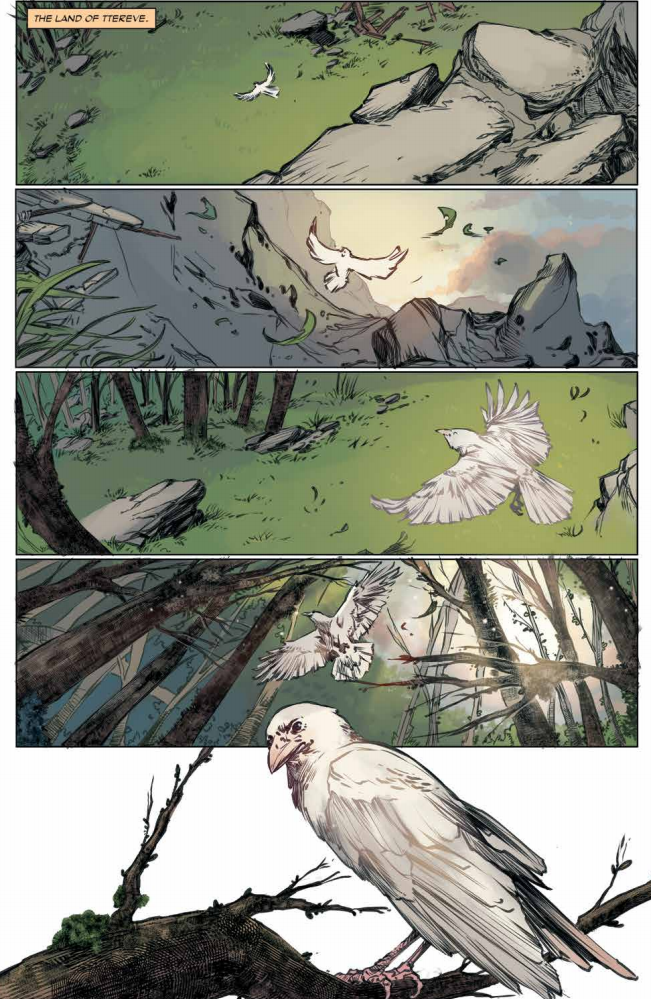 The story then bounds forward to the present, where Rose, Thorne and an injured Dante are still trying to make their way to Millhaven and the site of the battle. Dante’s injuries are quite severe, and he slows down their journey after falling from his horse. It is during this downtime that Thorne discusses his doubts over their new companion with Rose, however, she dismisses his warnings believing him to be incorrect in his judgement of Dante. Once Dante recovers, they hit the road again, making haste as they watch the ever-growing plume of smoke rising from Millhaven. We also see a small glimpse of the aftermath of the battle from the rebel’s end, as they hide from Drucilla’s guards, hoping to escape her wrath. News of Illa’s capture by Drucilla reaches Will, who is utterly devastated by the news, who is left feeling lost and utterly hopeless.

For me, I found this issue of Rose to be a rather interesting and revealing one. For the first time we delve a little into Rose and Drucilla’s pasts, exploring what they were like before their lives dramatically altered. Even from a young age, Rose was forced to hide her magical abilities, for fear of being killed by Drucilla. I rather like how Rose’s caring nature is reflected in this flashback, once again highlighting the fact that she is a powerful healer, even from a very young age. Whilst she has a curious child-like innocence about her, Rose comes across as being wise for her young years, questioning the kind of heartbreak and pain Drucilla must have gone through, to turn her into murderous person. This in turn leads to Drucilla’s past being explored, where we see the single event that changed the fate of both Drucilla and Ttereve; her arranged marriage. From this flashback we can see that even before she was Queen, Drucilla was still ambitious, selfish and conceited, unwilling to accept the path that her father had chosen for her. She is a woman who clearly doesn’t like her destiny to be shaped by others, instead wishing to take it into her own hands, and stealing the reign of Ttereve for herself. I’m also curious to see how things will pan out in the present. I share Thorne’s suspicions regarding Dante, finding it difficult to believe that this knight is truly reformed. Will Rose heed his warnings, or are these fears of his all for naught? 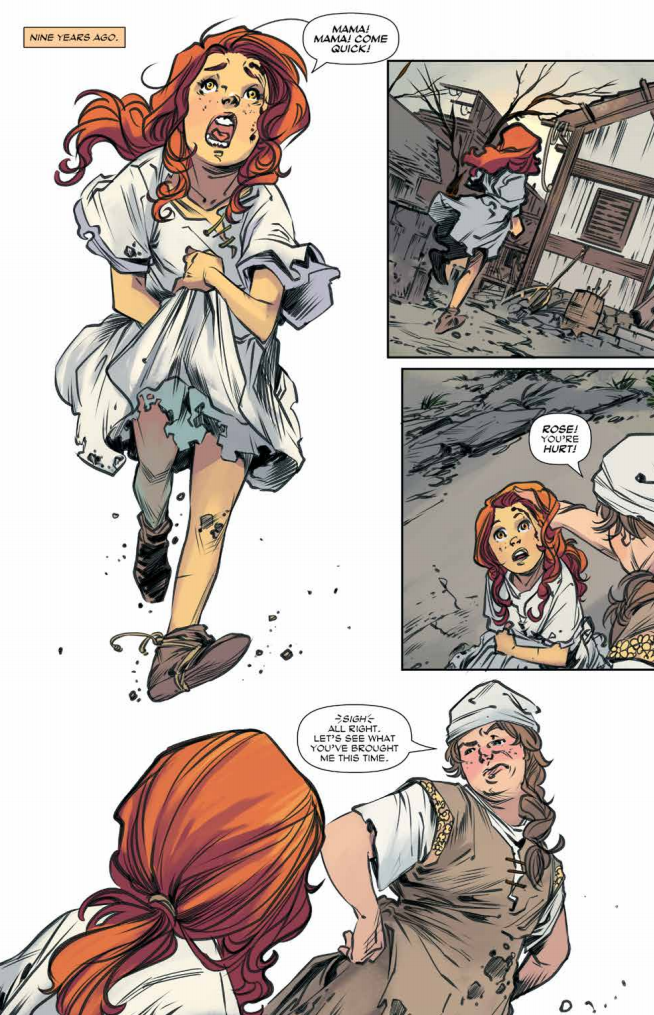 Once again, Ig Guara’s art is alive with a wonderful sense of energy. Movement is captured effortlessly, conveying a fluid feeling of action, with nothing ever feeling static or stiff. I also love Guara’s detailed linework, especially when seen on the expressive and animated expressions of the characters. I find them to be engaging, and easily readable through their intense and emotional faces. I found Thorne to be drawn a little differently in this issue, with one side of his face blacked out. I’m guessing this was intentional but I found it to be a little distracting. The colouring, by Triona Farrell works wonderfully alongside to art to heighten the overall energy of the visual narrative. There is a lovely vibrancy the colour palette brings, helping to give this world a magical aura.

Overall, I enjoyed this issue of Rose, finding it to be a revealing chapter in this tale. It was good to have a small glimpse into Rose and Drucilla’s past, giving us more of an understanding of the events that helped to shape these characters. I’m curious to see how things will unfold in the future, and I look forward to when the next issue comes out. 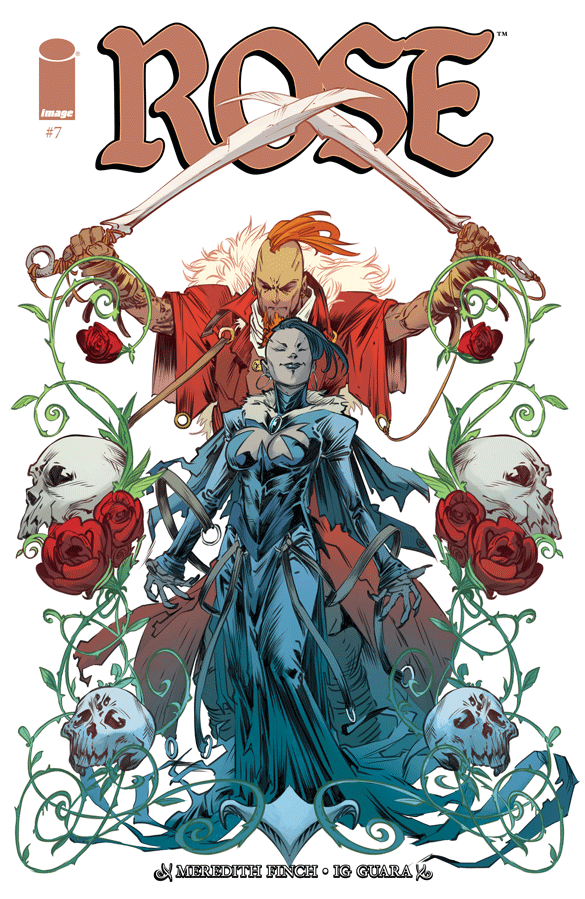