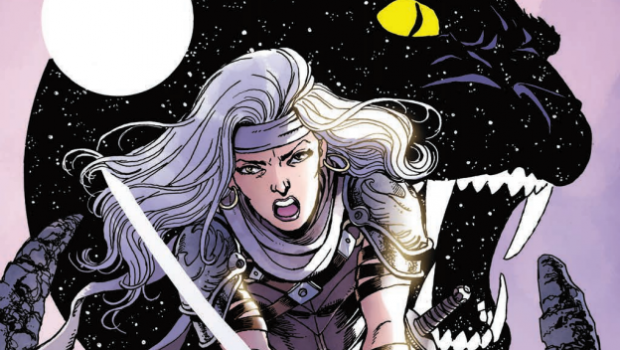 Rose and Thorne have finally found each other, but this meeting is tarnished by the dark forces that hunt them. Rebellion is rising in the land of Ttereve and the rebels desperately need Rose to stand and fight with them, as she is their last and only hope. 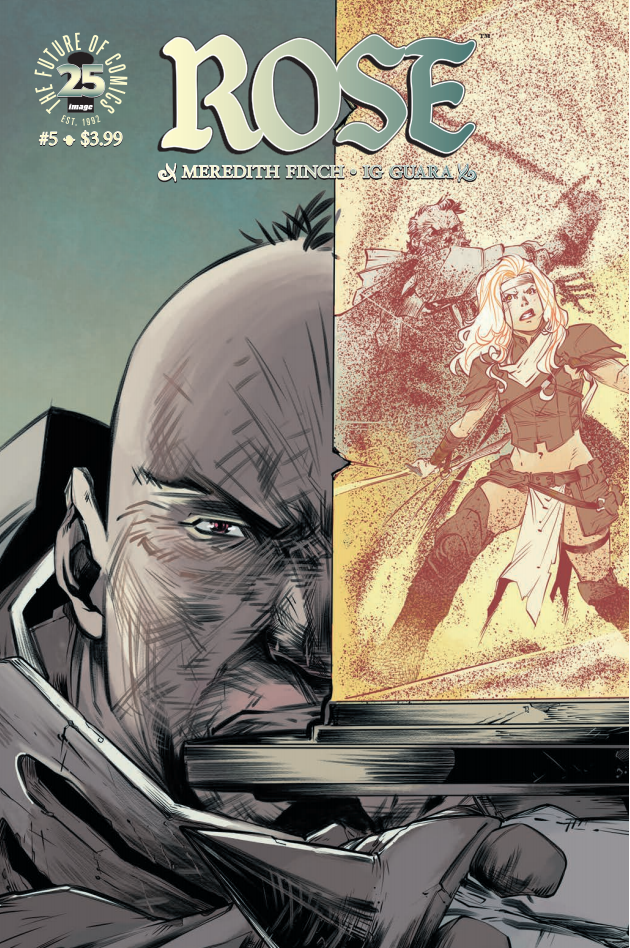 Rose #5 begins back in Millhaven, with the rebels recovering after their most recent battle with Queen Drucilla’s guards. Ila is being reprimanded by Will for allowing Rose to flee, as Will knows that she is their best chance at defeating the Queen. The rebels are waiting for Drucilla’s army to descend upon them, and on the eve-of-battle they dig trenches, craft arrows and make all the preparations for the war that is coming. The odds are stacked against them, but they won’t go down without a fight! Things are looking pretty grim for Rose as well, as she is held hostage by the knight Dante, and surrounded by a number of fallen Guardians. Thorne is there as well, but he is powerless to help, as he is chained up by a magical collar that suppresses his powers. He can only helplessly watch on as Rose faces the fallen Guardians alone. Will Rose and Thorne rise up and defeat the dark forces that threaten to destroy their world, or is it already too late? 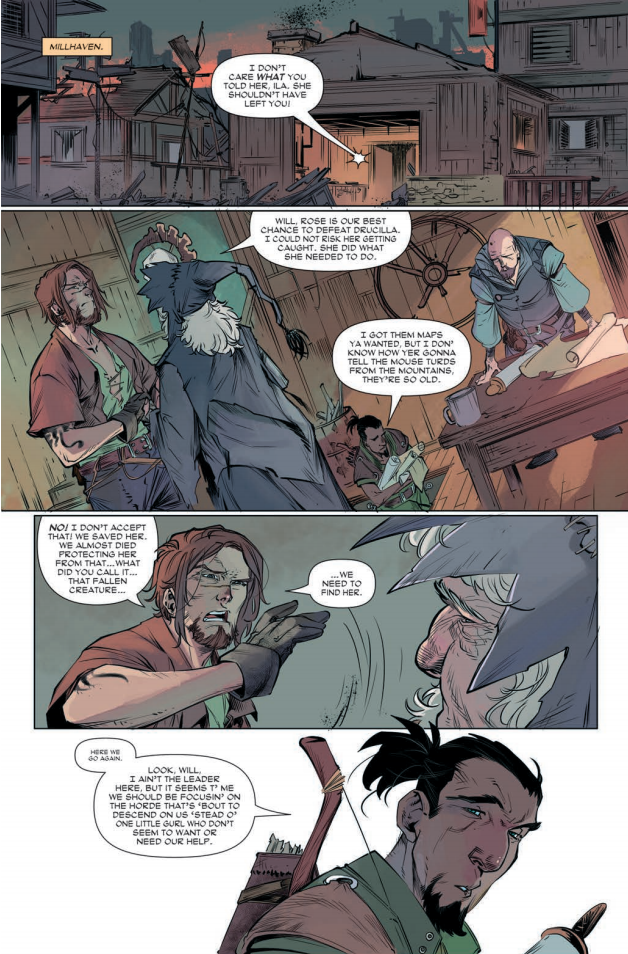 It’s great to finally see Rose and Thorne together, even if they are trapped, cornered and stuck in a pretty hopeless situation. They aren’t the only ones stuck in a pickle however, as the rebels are getting ready to face Drucilla and her army. Outnumbered, under prepared and ill-equipped for the impending battle, I’m feeling for these rebels, as they have a hard slog ahead of them. I found that there is a lot of tension in this issue, and I particularly enjoyed the heated exchange between the knight, Dante, and the fallen Guardians. Even though they are both loyal to Drucilla, there is immense conflict between them, which seems to be how Drucilla likes it…the crafty wench! I’m also intrigued with what Drucilla has planned for the rebels. We know that she doesn’t mess around, and the fact that she is there personally leading her army against them is a curious development. Her presence is ominous, and this has the rebels greatly troubled, as they see her as some kind of harbinger of doom! It feels like she is making this journey so as to finally squash this rebellion and put an end to the resistance, for once and for all. The Queen is used to getting what she wants, so it’ll be interesting to see how this unfolds. 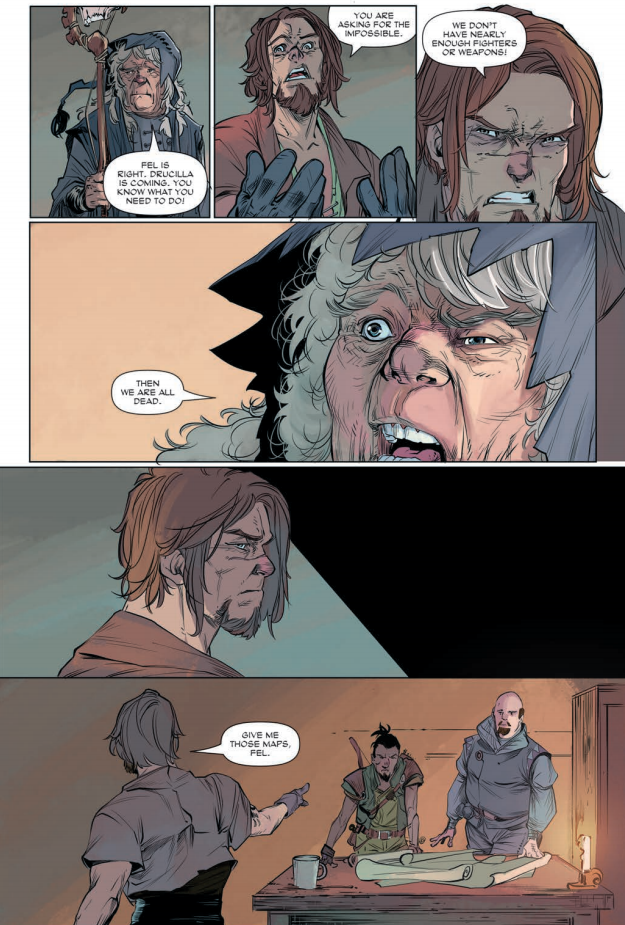 The art by Ig Guara has a wonderful sense of movement and fluidity in this issue. There are a number of action scenes that flow with a lovely feeling of energy and motion. This has me excited to see the rebellion in full swing in the next issue, as I’m sure it’s going to be visually epic! Guara’s linework is fine and detailed and I find his art to be very pretty and expressive to look at. He has a wonderful ability to capture the raw emotion that these characters are experiencing, portraying their tormented and conflicted feelings perfectly. I also love the detail of the fallen Guardians, and I find them to be quite haunting and scary, like some kind of animated, rotting corpse. The colouring, by Triona Farrell, is effective in achieving each scenes overall tone and reinforcing the emotional mood. I particularly love the sense of light that Farrell has achieved, with many scenes possessing a luminous glow of warm light, that appears almost magical in its ambience. The art and colouring all come together to bring this high-fantasy world to life, framing it in an energetic and vibrant aura. 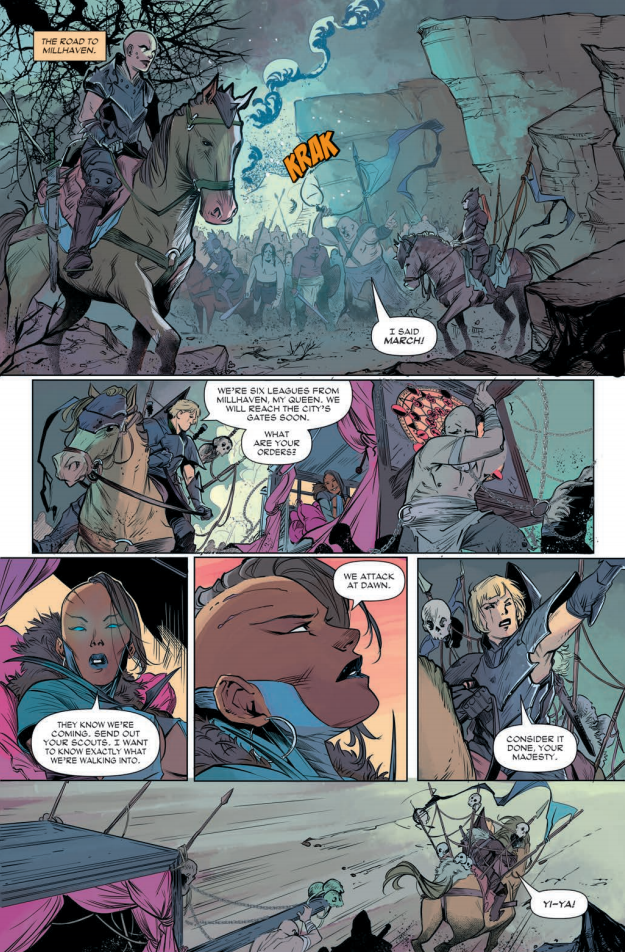 Overall, I found this to be a gripping and engaging issue of Rose, with the tension quickly building as war is on the horizon. Rose and Thorne are together, but they need to find a way back to the rebels before it’s too late, so I’m looking forward to seeing how they will overcome this obstacle. I’m also mighty curious to see what Drucilla has planned for this rebellion, as I’m sure it’s something brutal and depraved…and I wouldn’t expect any less from the vile despot.