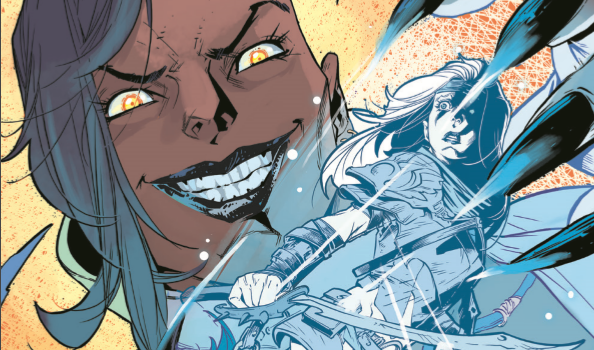 Recovering from the shock of the brutal attack on her village, Rose tries to come to terms with what she has lost. Embarking on a path of vengeance and self-discovery, Rose learns more about herself, the powers she possesses and the dark forces at play in this world. Strap yourself in for a high fantasy adventure filled with swords and sorcery! 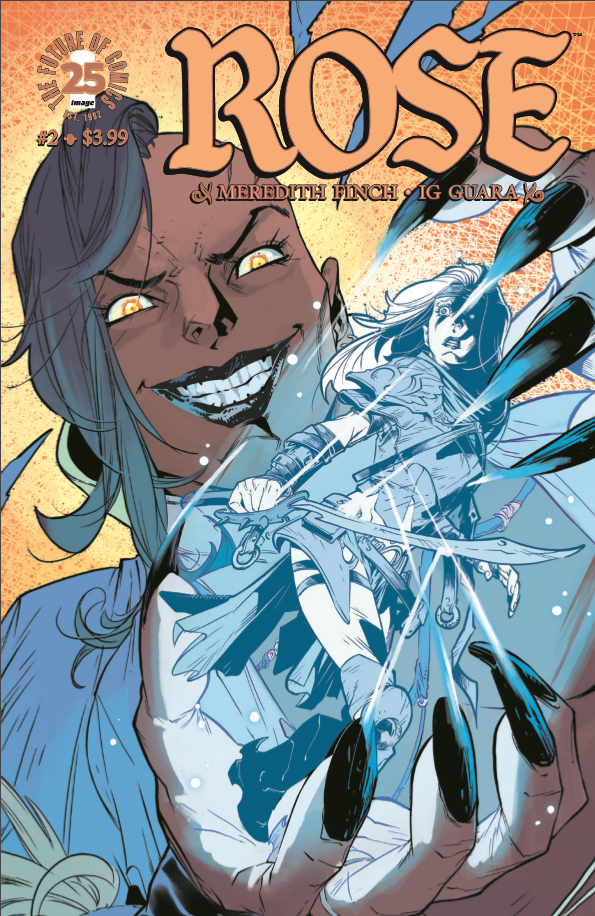 Rose #2 begins back at the rebel camp, with Rose recovering from the attack on her village, where everyone was killed. Filled with rage and wielding a sword, Rose impulsively runs off with vengeance on her mind, as she vows that they need to pay for what they’ve done. Luckily however, Will follows her and quickly stops Rose before she recklessly throws her life away, fighting a fight she cannot win. After calming Rose down, Will explains that if she wants to be a warrior that she must first understand the responsibility and burden of being one first…wise words. During a tender moment, Rose accidentally reveals that her tears possess healing properties and Will immediately suspects her to be a spy of Queen Drucilla, however, this exchange is abruptly interrupted as they are ambushed by a Fallen Guardian. Rose’s powers have become unlocked and with that comes great responsibility, taking her down an unexpected path that is stirring great power that are both good and evil. 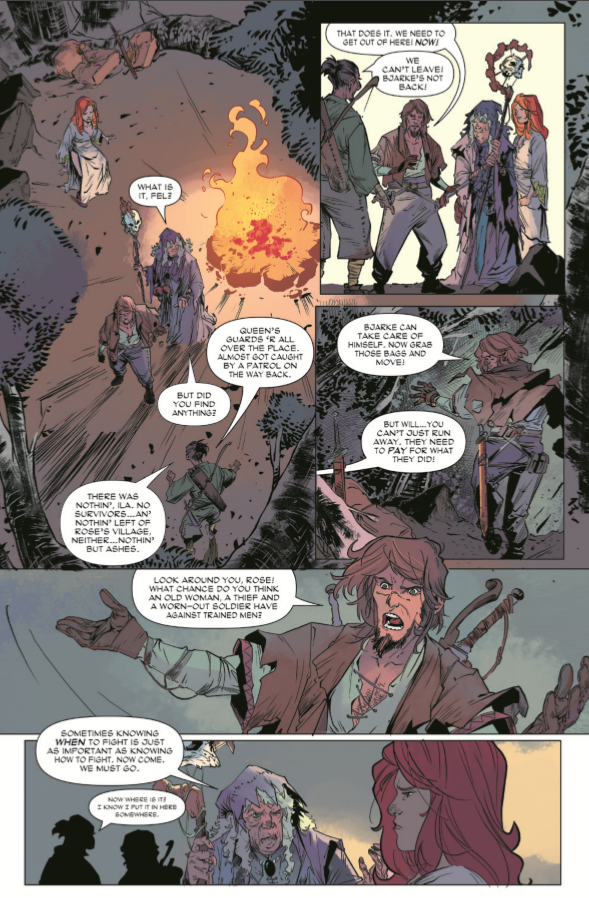 We begin to learn more about the kind of person Rose is in this issue. Passionate and naïve, Rose appears to understand little about the dangers of the world she lives in. I actually find her to be very relatable, and seeing her react in such an angry and impulsive way after her mother was murdered feels very natural and in no way forced. She is brave but very foolish and blinded by her rage from what has happened to her family and village. She is also very kind and gentle, which I find to be an interesting and believable contrast with her emotions, as it reflects the kind of passionate person that she is. I like Rose and I feel like this is a character that we will see grow and mature throughout this journey. I’m also intrigued by Queen Drucilla and what makes her so damn nasty. I love a badass Queen but what I’m curious about is what drives her to do the things she does. Does she have a gritty backstory or is she just plain power hungry and evil? It’s early days yet and we still have a lot of lore to learn about this world and the people that inhabit it and to tell the truth, I’m looking forward to discovering more. 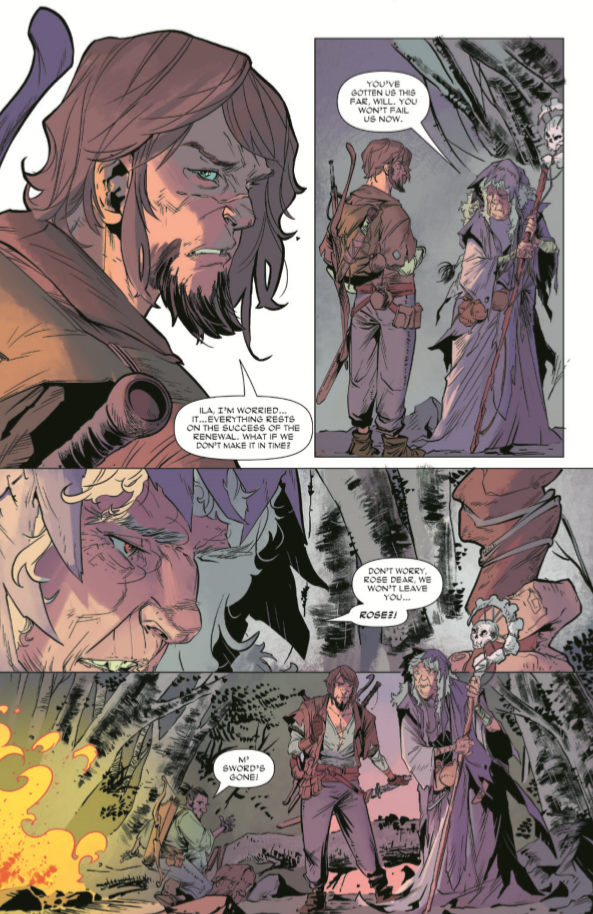 The art by Ig Guara is both captivating and intense. Beautifully detailed and filled with emotion, I find that his art perfectly depicts this fantasy world in a wonderfully vivid and creative way. I found it easy to immerse myself in Guara’s visual narrative, especially during the intense emotional scenes. Rose’s experiences so much anguish during this issue and her face expressed her emotions so passionately. I also enjoyed the action scenes and found that there is a sense of movement and fluidity to Guara’s art. I’m looking forward to seeing more sword fights and hopefully magic duels in the future. Colourist, Triona Farrell, heightens the overall emotional tone of the story by perfectly capturing the mood through the lovely colour palette. This feels like a magical world and the art and colours effortlessly come together to transport us into this epic fantasy world. 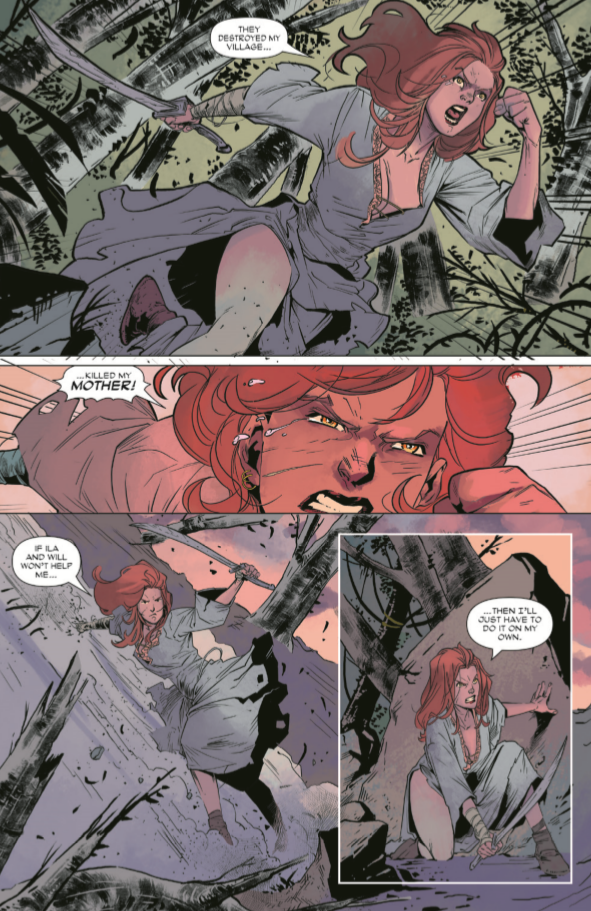 Overall, I’m really enjoying this journey that Meredith Finch is taking us on. It’s great to have a story with not only a strong female protagonist but also a strong female villain as well. There is a lot here that has yet to be explored and I’m looking forward to discovering more about the lore of this world and learning about what drives some of the characters. I’m also keen to see more of Thorne in the future and the role that he has to play. If you’re interested in venturing into an exciting new fantasy world, filled with intriguing characters and a compelling story, then do yourself a favour and grab a copy ASAP!