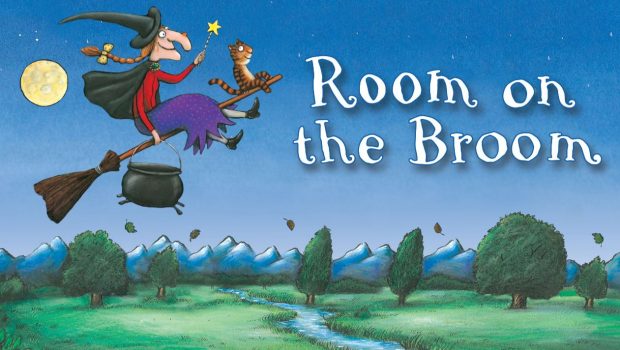 Room on the Broom flies into Arts Centre Melbourne this summer!

MELBOURNE, THURSDAY 15 SEPTEMBER 2016 — Best-selling children’s author Julia Donaldson and illustrator Axel Scheffler’s magical tale Room on the Broom will fly into Arts Centre Melbourne’s Playhouse from 4 – 15 January 2017. UK theatre company Tall Stories and Australia’s CDP Theatre Producers – the team behind the stage adaptations The Gruffalo and The Gruffalo’s Child – will bring to life the award-winning book in a play filled with songs, puppets, laughs and scary fun for children aged three and up and their grown-ups.

The Witch and her cat are travelling on their broomstick in search of a fierce dragon when they meet some new friends along their journey – a friendly dog, a rather talkative bird and a charming frog. But this broomstick’s not meant for five and – CRACK – it snaps in two… just as the hungry dragon appears! Who will save the poor witch and will there ever be room on the broom for everyone? Julia Donaldson is one of the world’s most popular children’s book authors. Her award-winning books including The Gruffalo and Room on the Broom are perennial bestsellers around the world. The Gruffalo has sold more than 13.5 million copies worldwide.

Room on the Broom has been translated into 21 languages and has won six book awards. Julia was appointed UK Children’s Laureate 2011-2013 and received an MBE in the Queen’s Birthday Honours list for her services to literature.  Axel Scheffler is the best-selling, award-winning illustrator of many of the world’s favourite picture books including The Gruffalo, The Gruffalo’s Child, Pip and Posy, The Room on the Broom and Zog. His career as an illustrator of children’s books began more than 22 years ago; since then Axel has achieved worldwide acclaim and his books have been translated into over forty languages. His first book with Julia Donaldson, A Squash and a Squeeze was published in 1993 and has been followed by bestselling and award winning favourites including The Gruffalo and Stick Man.

CDP Theatre Producers, the team behind the Australian co-productions of The Gruffalo and The Gruffalo’s Child, along with premiere book adaptations of The 13, 26 & 52-Storey Treehouse, Snugglepot & Cuddlepie and Mr Stink, is an award winning independent theatre production house specialising in boutique theatre of the highest quality.