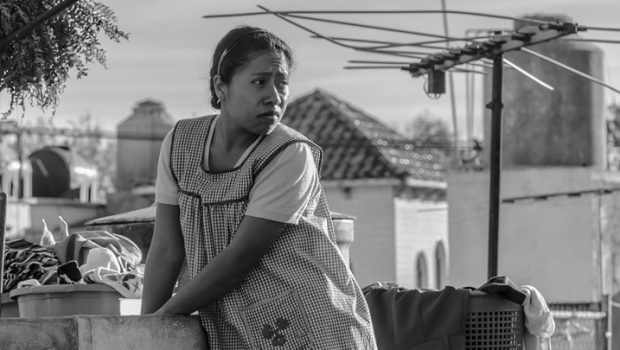 Many of us will never see Mexico in our lifetime. Similarly, our understanding of the country’s political divide in the 1970s may only be drawn from books and other secondary sources. It is testament to the power of cinema then that it can create such vivid illustrations of world history.

Sometimes, a film becomes so absorbing that we feel as though we are drifting through time and using cinema as a metaphysical tool to revert to a once unknown past. The shadows of the cinema dissolve our own sense of space, and the light from the screen forges a vivid daydream that projects an irrepressible illusion of reality.

This rare sense of transcending time and space is apparent while watching director Alfonso Cuarón’s autobiographical drama Roma. It is arguably his most mature and delicate work to date because its classical film style recreates a bygone era of intense social realism. Comparisons are already being drawn to films such as Yasujirō Ozu’s Tokyo Story (1953).

Cuarón is currently one of the world’s strongest filmmakers. With films including the coming of age drama Y Tu Mamma Tambien (2002), Harry Potter and the Prisoner of Azkaban (2004), the London-set dystopian thriller Children of Men (2007), and his brilliant space adventure Gravity (2013), his feel for creating unique geographic spaces is unmatched.

Set in Cuarón’s birthplace of Mexico City, Roma’s vision of working-class struggles in the early 1970s marks a deeply affecting and compelling piece of cinema. The story’s realism allows for personal insights into the director’s past and dramatises the instability of Mexico during a period of social unrest. The personal attachment is apparent in the way Cuarón used the same furniture from his childhood for the film sets.

Aside from converting Roma’s images into black and white, Cuarón has resisted using computer imagery. Instead, the images are etched in realism and verisimilitude. Each frame emanates from Cuarón’s memory and his recollections of Mexico. While he was born in the 1960s, he is old enough to clearly remember the following decade. This sense of personal exploration manifests in the visual and thematic staples. 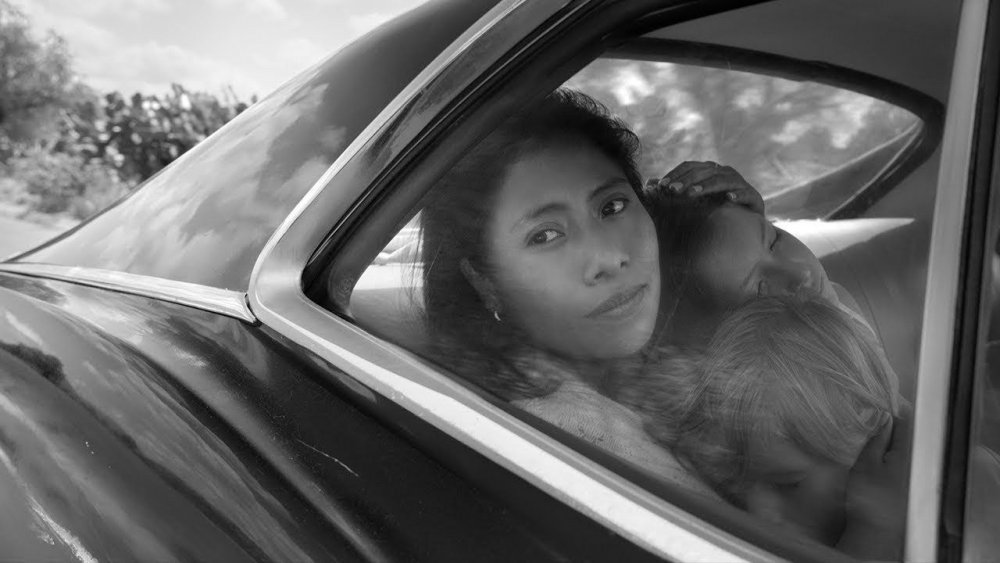 He reflects on the identity of his childhood babysitter, Liboria Rodriguez, because he felt he needed to explore her identity and perhaps show her gratitude. He begins by making her the hero of his own script.

Her character here is Cleo (Yalitza Aparicio in her debut role), a softly-spoken indigenous maid who works for Sofia (Marina de Tavira), her husband Antonio (Fernando Grediaga) and her mother Teresa (Veronica Garcia). She is tasked with looking after their house and the family’s four children. Cleo’s only friend is her fellow maid, Adela (Nancy Garcia).

The relationship between Cleo and her employers unearths acute social observations. During the opening credits, we see a still top-down viewpoint shot of soapy water running off a concrete tile. While off-camera, this is arguably Cleo facing the ground as she completes her chores. The shot selection and extended duration marks her hollow existence in the world. 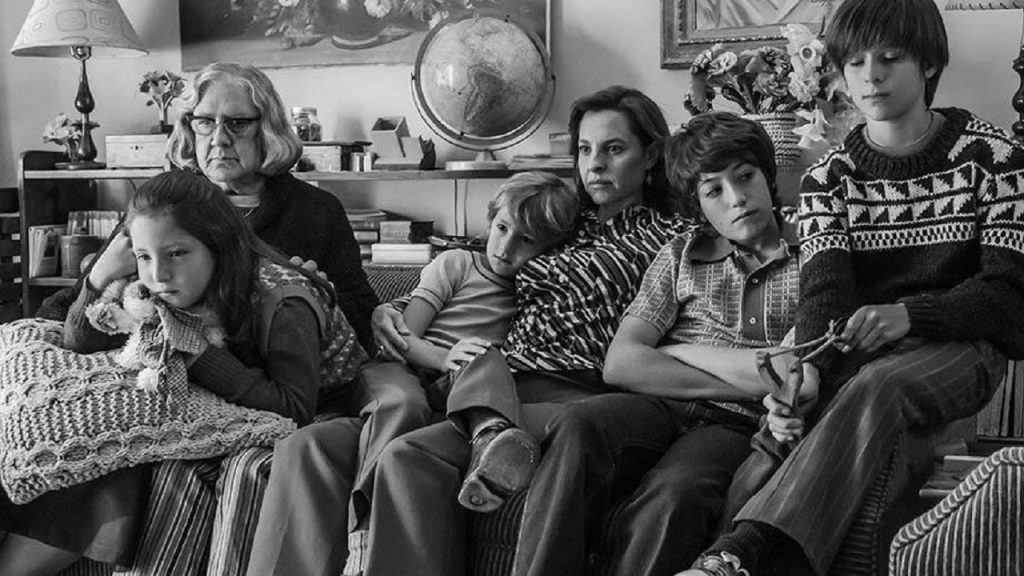 Through the images alone, we understand why she feels this way. The family treats her like their slave. While they are never mean or abusive, they expect her to bring them food, wash their laundry, gather the children, and clean the driveway. These people are not mean-spirited but accustomed to a social hierarchy that shields them from recognising her humanity.

The story’s core dilemma is entrenched in social irony. Cleo’s boyfriend, Fermín (Jorge Antonio Guerrero), is obsessed with martial arts and is painted as the film’s villain. He makes a choice to neglect Cleo in a terribly adolescent way that dispels any physical strength he projects. Their relationship is juxtaposed with Sofia and Antonio, who have decided to separate but have not told the children.

Sofia insists the children write him letters asking for him to return from his business trip. The major thematic question is whether Cleo and Sofia can dissolve the social order and be unified by their disappointment with men. Sofia memorably says to Cleo, ‘women are always alone’. The line is ironic because she never recognises their collective pain. The resolution is perfect though; it is touchingly free of sentiment and fully aware of life’s cyclical nature. 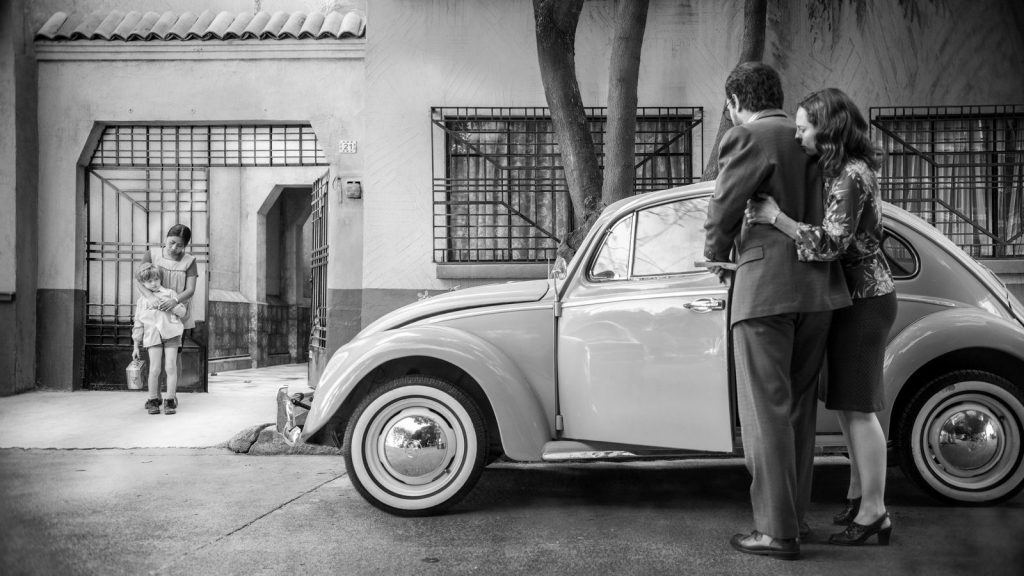 Furthermore, Roma debunks the myth that strength is deeply ingrained in masculinity and male identity. The male characters, both adults and children, are deplorable. Fermín is revealed to be a violent monster, and it is later revealed that Antonio is equally as spineless. The flawed characterisation of the boys in the household is subtly drawn. In one scene, they are photographed chasing each other with a lamp and then accidentally smash a window.

Violence also hampers the development of young men. Fermín attends a martial arts camp run by a ridiculous reality television star. He is then involved in a terrible riot. Cuarón’s view is that charismatic, Trump-like extremists distort the minds of young men. 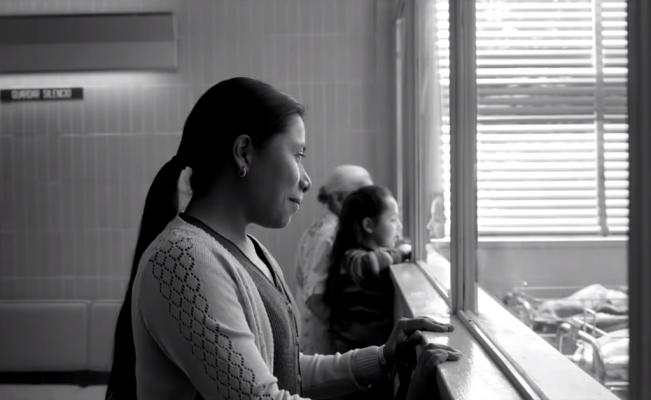 Countless other moments throughout Roma further signpost the likelihood of death. For example, in an early rooftop scene, Cleo warns the boys not to play near the edge, but thankfully nothing occurs.

Similarly, in various busy street scenes, we fear that the children might run onto the road. These moments render Cleo’s world as uncertain and dangerous. If anything happened to the children, she knows she would lose her job and any personal safety net she might have. Thus, we are immersed into her feelings of determination to protect the children.

While death is sometimes feigned, life in Mexico City is not uneventful either. By selecting a time period of great uncertainty, Roma seamlessly marries the mundanities of life with larger dramatic moments in an utterly convincing way. Life’s uncertainty and fleetingness is most vividly realised in the riot and hospital sequences that together rank as two of the most intense set pieces in modern film history.

Cuarón’s formal choices help immerse us into the psychology of the characters, and complement the thematic spine. The black and white 65mm photography is beautifully realised but purposeful in visualising Cuaron’s childhood memories and the bleakness of Cleo’s future. He regularly shoots scenes from a wide angle and rarely uses close-ups.

These formal choices provide the images with width and depth and ensure that the story is told with startling objectivity. He wants the audience to see firsthand the spatiality, particularly the number of rooms in the household, to stress the hard labour that Cleo and Adela must undertake to survive.

The blocking of the actors also underlines Cleo’s perceived lack of self-worth. She is often filmed on the side of the frame, such as when the family watches television together or when she and Adela must eat dinner at a separate table. The decision not to use a soundtrack further stresses Cleo’s isolation with a quietly tempered atmosphere that is never intruded upon with non-diegetic music telling us how to feel. 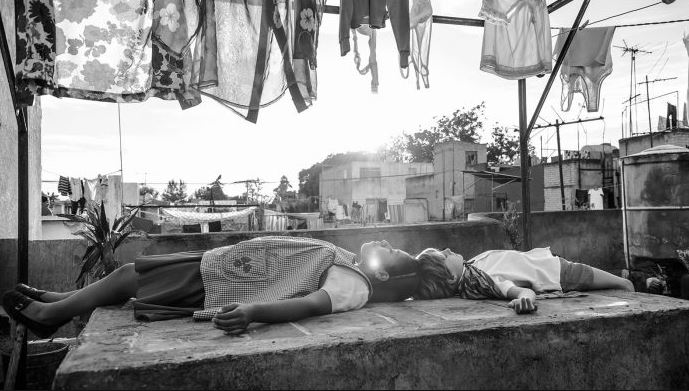 In one lonely sequence, the camera pans around in a circle as Cleo turns off the lights one evening. The circular motion reflects the constrictions of her routine and her existence as she waits on a family incapable of serving themselves. The dense shadowing further amplifies her isolation and depression while being treated like a slave.

In another scene, she hand-washes clothes on a rooftop while the two boys play together. One of them pretends to be dead. As a joke, Cleo lies down on the concrete slab too. The camera tilts upwards to show the volume of clothes she has washed. Through the images and the dialogue, we realise that behind her dry humour, Cleo is aware of her exhaustion.

Small visual details also become as important as the larger set pieces. For example, the volume of toys scattered around the rooms of the children implies how spoilt they are. There’s also a humorous shot towards the end where Cleo and the family are positioned on the left side of the frame. In the opposite corner, a wedding unfolds. The framing contrasts the differences in life experiences of love and happiness.

Roma’s most remarkable achievement is Cuarón’s understatement with these filmic techniques. The ideas surrounding enslavement, social hierarchies and gender are quietly drawn by the visuals alone. Cuarón trusts his audience to engage with them rather than using dialogue to explain the conflict.

Some might foolishly argue the film is slow and boring because it appears uneventful. However, the subtlety of the relationships and the dilemma, resulting from the pure cinematic form, adds to the social realism and provides the audience with room to determine the milieu’s purpose.

Other films might be more bombastic, but Roma provides humanity to the working class with an unparalleled level of detail. Yalitza Aparicio significantly contributes to the human dignity and the emotional pulse too. Her naturalistic, minimalist acting style illustrates Cleo’s reserved nature. The look in her eyes when she tells Sofia something important about herself typifies her fear of losing the same livelihood that imprisons her and keeps her alive. 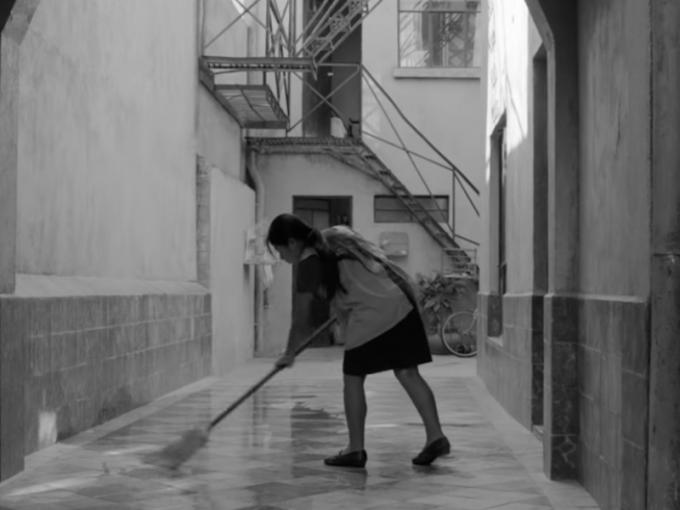 At a time when Mexicans have been senselessly vilified by right-wing extremists, the ability to humanise indigenous people has never been more pertinent. Through a character like Cleo, we understand that these people are inseparable from us. Maybe we are not transported that far through time at all by cinema but merely see clearer and unexpected reflections of ourselves on screen.

The fact these characters look different to you is irrelevant. Each day, they share the same aspirations for a better life as everyone else. It would also be hard for any smart person to watch Roma and not consider its relevancy today, specifically the goals of the migrant caravan from Honduras as it approaches the US border.

Cuarón strengthens his plea for empathy and the enrichment of humanity until the last frame. The opening shot of the tile bookends with a closing image of Cleo walking up a steep flight of stairs. The contrast in the elevation is not incidental. It implies that while life seems inert and unchanging, after what Cleo has experienced on her journey, she can at the very least hold her head up high.

Summary: A rare sense of transcending time and space is apparent while watching director Alfonso Cuarón’s autobiographical drama Roma. It is arguably his most mature and delicate work to date.