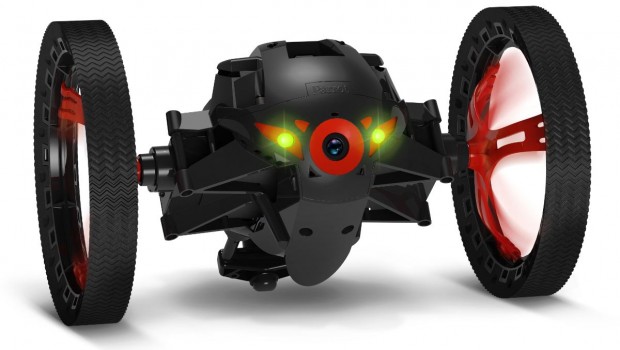 With Rolling Spider and Jumping Sumo, Parrot creates the MiniDrones, technologically advanced and very playful connected robots piloted with a Smartphone or a tablet via the free FreeFlight 3 application. Parrot Rolling Spider: an ultra-compact flying drone with impressive agility. It flies indoor and outdoor with great speed and stability. It rips through the air, loops-the-loop and thanks to its removable wheels, rolls from floor to ceiling.

Parrot Jumping Sumo: a responsive robot with a strong personality which rolls, zigzags, circles, takes 90° turns and which in a flash, jumps up  to 80cm in height and  length!  With  its  embedded  camera  it immerses you into the heart of any adventure! With Parrot MiniDrones ‘Rolling Spider’ and ‘Jumping Sumo’ everything around you becomes an excuse to play and the world transforms into a giant playground! Races, slaloms and acrobatics in the air or on the ground, jumping obstacles… or for the pleasure of seeing them evolve, Parrot MiniDrones shake up the foundations of the traditional toy world and make it leap into the era of drones…

With the stability of bigger drones… Ultra-compact, super light (55gr) and very robust with its polyamide structure, the Parrot Rolling Spider is a flying drone comfortable indoor and outdoor. It is piloted with Bluetooth Smart1 via the free FreeFlight 3 application for iOS, Android,Windows 8.1 and Windows Phone 8.1 Smartphones and tablets Like a flying acrobat, its engines can handle high speed flights and loop-the-loop with astonishing agility. Flying is cool… How about rolling? The Parrot Rolling Spider comes with detachable ultra light wheels on a carbon fibre axis (10gr). With the wheels attached, it races on the ground like a racing car and can, like a spider, climb along the wall and run on the ceiling… Don’t think the wheels impact the agility of the Rolling Spider: it can throw itself into the air with the same speed and stability!

An ace of acrobatics, on the ground and in the air

The Parrot Rolling Spider performs high-speed flights: it rushes, turns right, turns left, achieves front, back and side flips with an amazing fluidity and stability, and follows by the book the control of the pilot! The pilot ‘swipes’ the screen from top to bottom and the Rolling Spider turns 180° in a flash! The Parrot Rolling Spider is on alert even when its engines are off! Throw the Rolling Spider in the air like a dove and its sensors detect the movement instantaneously: its engines start automatically and it stabilises in the air, awaiting your instructions! A vertical camera (60fps), positioned under its fuselage, helps it stabilise during flight. It also enables you to take snapshots, which are recorded on the Flash memory (1Gb) of the Rolling Spider. The snapshots can then be transferred on a computer via the embedded micro-USB connector.

Thanks to its numerous sensors and its autopilot, the Parrot Rolling Spider is extremely easy to pilot via the FreeFlight 3 application.

Like a well-trained pet, this connected flying robot responds to your orders!

Small, but packed full of sensors!

The Parrot Jumping Sumo is a new kind of connected robot with a strong personality. With it, each element of your environment can be made into a playground with challenges! It is as speedy, responsive and manoeuvrable as a racing car. The Jumping Sumo runs full-speed (7 km/h) inside & outside the house, takes 90° bends and weaves in and out! It can also perform 180° turns in a flash! A technical prowess, unique in the world of toys. Its two large retractable wheels ensure perfect road holding and adapt to all driving styles: the wheels open for greater stability in high-speed likewise the wheels retract in ‘compact’ mode, to enhance agility and make its way through narrow areas…

It is piloted with Wi-Fi 2.4 or 5 Ghzvia the free FreeFlight 3 application for iOS, Android, Windows 8.1 and Windows Phone 8.1 Smartphones or tablets.

The acrobatic robot that nothing can stop:

Jump on a chair? On a table? Jump into your arms? Avoid an obstacle? No problem, the Parrot Jumping Sumo obeys and always lands on its wheels! Numerous automatic movements and acrobatics are easily available from the FreeFlight 3 piloting application, without training:

Even more impressive, thanks to a patented spring-mounted system, the Parrot Jumping Sumo jumps up to 80cm high and long! Your entire environment becomes its playground. Everything is an excuse for entertainment and challenges! A ‘road plan’ enables you to program a course and actions. Once entered in the application, the itinerary appears amongst the pre-defined movements of the Jumping Sumo. You just have to click on the new icon to see the Jumping Sumo move autonomously.

The world in immersive view:

The Parrot Jumping Sumo is equipped with a wide angle camera that streams live immersive views on the screen of the piloting Smartphone or tablet. You discover the world at the height of the Jumping Sumo and explore areas that were inaccessible until now…it can also take pictures and record videos which are stored on a USB stick to plugged into the Jumping Sumo.

The connected robot that expresses its emotions

The Parrot Jumping Sumo is a robot like no other. It shares its emotions. When everything is fine and it is ready to play, its eyes shine green. Otherwise, they turn red. The Parrot Jumping Sumo expresses a range of ‘sounds’ with each of its movements. Pat its head, stroke its body and it reacts to show you its affection.