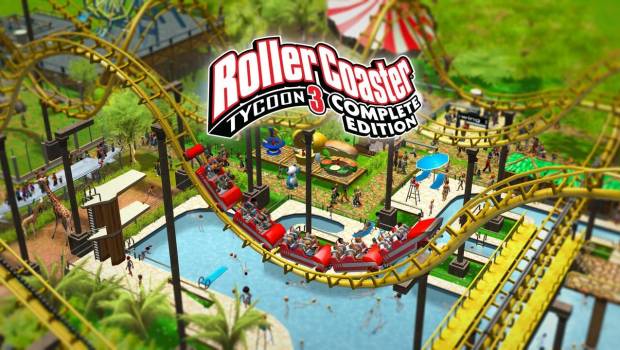 Summary: Rollercoaster Tycoon 3 comes to Switch in all of it's glory, but with the trade-off being a less than desirable control scheme.

Rollercoaster Tycoon 3: Complete Edition seemed to come out of absolutely nowhere. Sure, we’ve had Rollercoaster Tycoon Adventures on Switch for a while- but the price seemed difficult to justify. Imagine my surprise when a tried-and-true title in the series pops up at a fraction of the cost, with all the expansions included. Now seems like a better time than ever to sink your teeth into the original theme park simulator portably or on your telly with a Nintendo Switch. 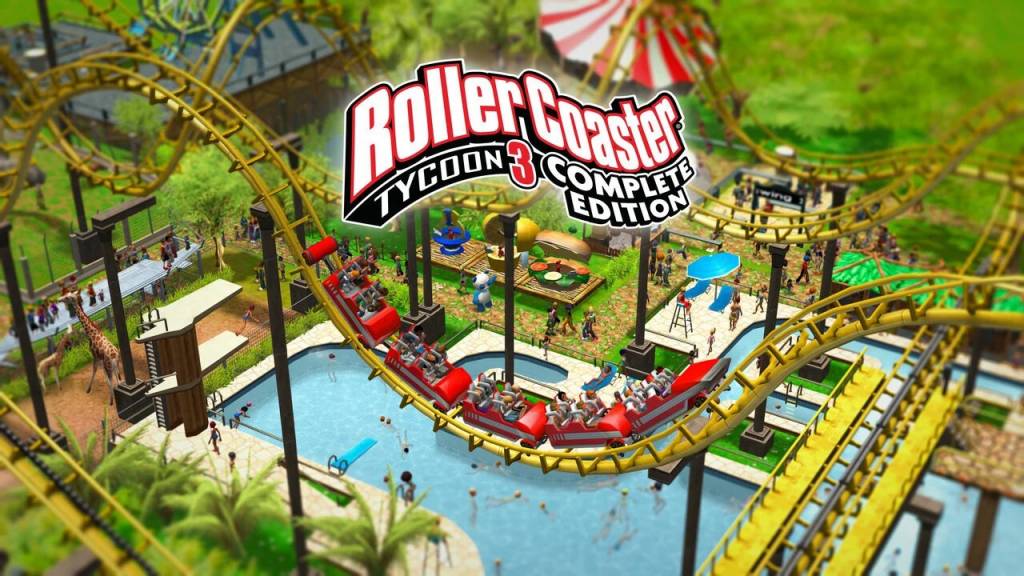 Rollercoaster Tycoon 3 grants you a large set of parks to make your own. In the career mode, you start out with a small budget to build the foundation of your dream theme park. Your earnings from customers let you expand your park but the bigger it grows, the larger the cost is to maintain it. Keep your customers happy by providing plenty of food stalls, toilets, information centers, and ATMs. Employ workers to tend to your park in various ways. Every park has objectives to rank up to Tycoon status, like reaching a record amount of guests or having a high net worth. These achievements aren’t a grind to fulfill, and truthfully you don’t need to think too deeply about them. All you need to focus on is growing your park, and the rewards will follow naturally. 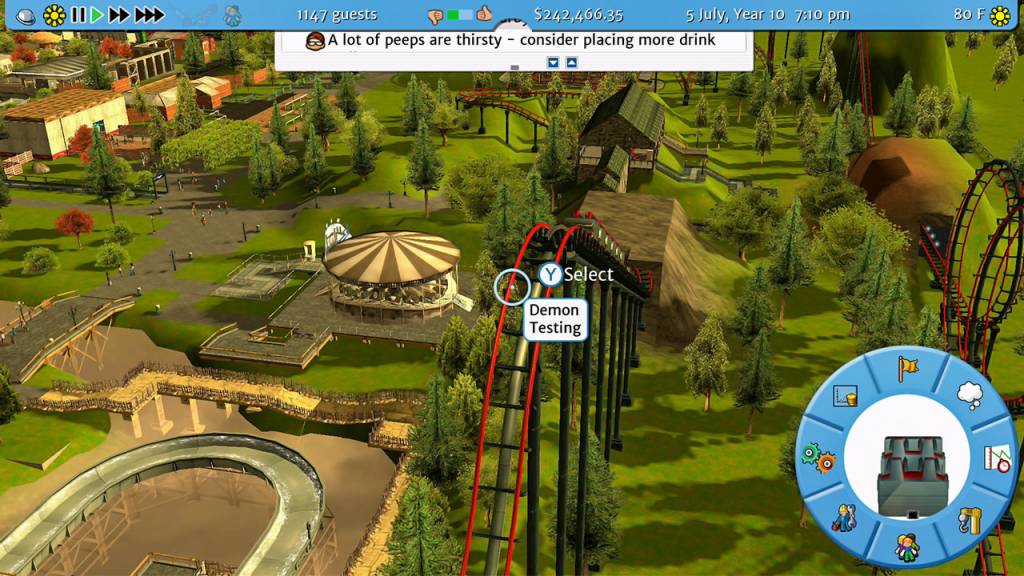 Of course, the meat-and-potatoes of the game is about the rollercoasters. Rollercoaster Tycoon 3 gives you the tools to design the wackiest, most exciting rollercoasters you can think of. As long as you’ve got the budget and the ambition, you can build it. Keep in mind that your creations have to obey the laws of physics to a point- if your track layout is impractical your rollercoaster might break down or soar off the tracks, killing guests in the process. You need to be careful designing your rollercoaster to be safe and reliable while also being entertaining and cost effective. If the hassle of designing your own rollercoaster is a hassle for you, worry not for there are dozens (perhaps over a hundred) pre-made rollercoasters you can drop into your park. It’s not as fun to build a park with pre-made assets, but the option is available if you’re a beginner (or just a tad lazy). 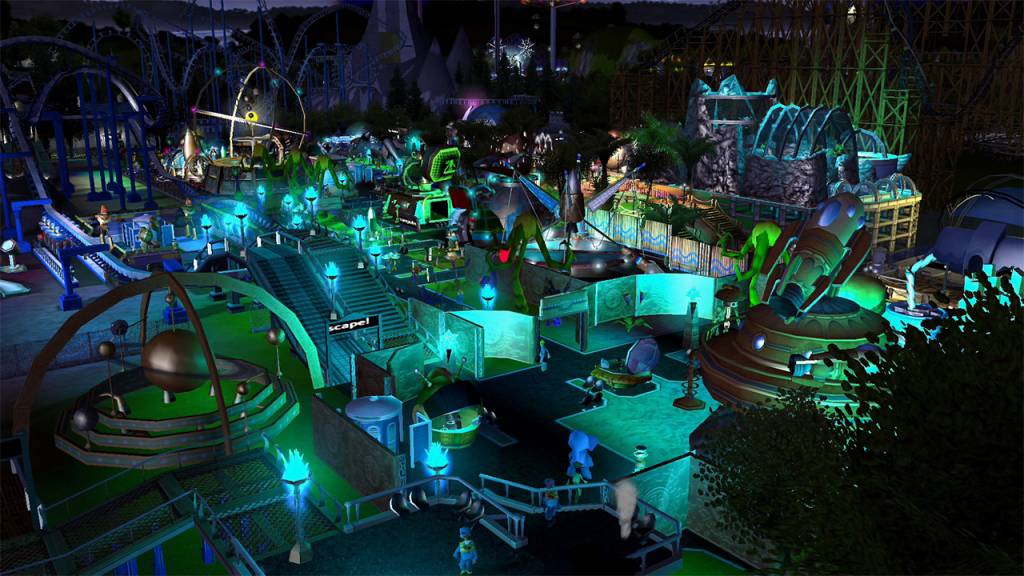 Build with no limits!

If you’re not one for managing a business, Rollercoaster Tycoon 3 offers a free play mode where you’re free to build whatever you like without restriction. There’s no need to worry about what the customers want, or which rides are profitable. Make and do whatever you please with unlimited money. Create your own beautiful mess of a theme park. Build dangerous rollercoasters with the intent to crash and cause mayhem. Charge your customers $5 to use the toilets. Connect every attraction together so customers have no choice but to ride every rollercoaster in the park in a linear fashion. Make literal death traps for your guests. This mode celebrates the chaotic fun of when simulation games go wrong. It’s a good way to kill time when you’re bored, and you can even learn more about the game by playing around with settings you wouldn’t otherwise touch. 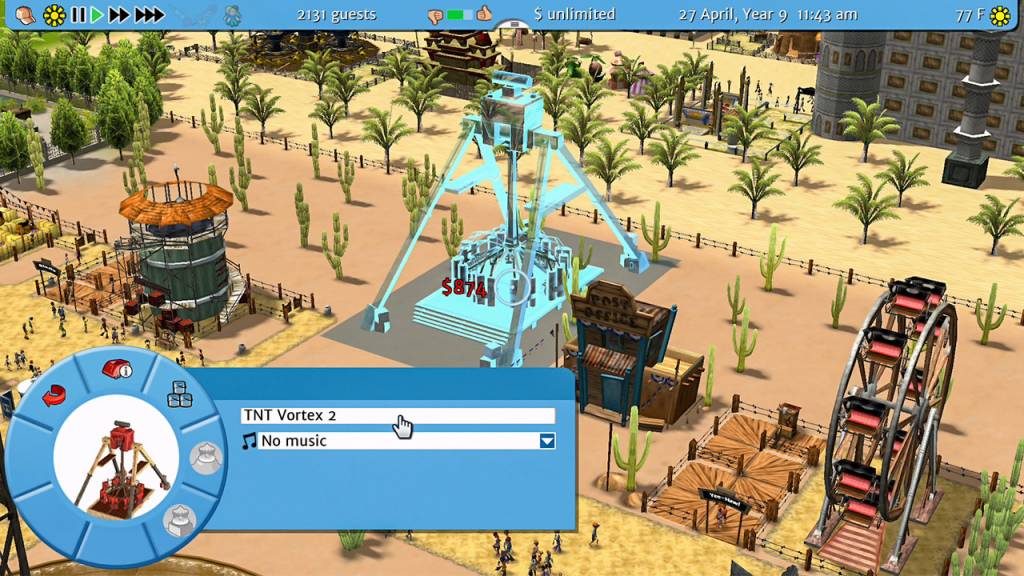 Where Rollercoaster Tycoon 3 on Switch falls short is in terms of controls. This is a PC game being adapted for console. A control setup designed for a mouse and keyboard doesn’t work as well for a traditional controller. The porting team have done their best to adapt the game for a completely different format, but the by-product is some very slow, finnicky controls. There’s a heavy emphasis on using the shoulder buttons in tandem with an on-screen wheel controlled with your joystick, but it’s not intuitive. Navigation is a chore due to the sheer amount of submenus within each ‘wheel’. The game’s creation tools are incredibly deep and take a lot of time to learn (which isn’t a bad thing, mind you), but the clunky controls make the learning process much slower. Dare I say, it’s not approachable for inexperienced players. You certainly get used to the controls as you spend time with the game, but you won’t be competent at construction until you’re at least a few hours in. 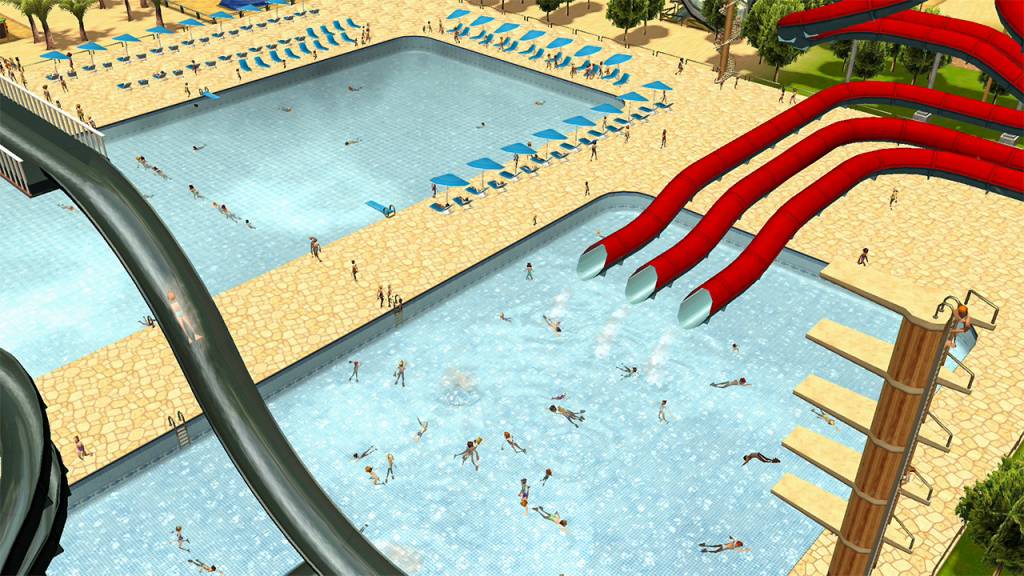 Rollercoaster Tycoon 3 debuted in 2004, and that’s apparent in the presentation. The graphics, while certainly impressive for the time period, are quite dated today. However, the performance of the game on Switch is quite impressive. The framerate is consistent with some occasional, negligible drops and the higher resolution and widescreen is very welcome. There were some times throughout my experience with the game where the render distance was low, and object pop-in was noticeable. But these moments were few and far between. For the most part, this is a solid port of an older PC game to the Switch. There are some things I wish could be optimized better for this Switch release. Touch screen support in handheld mode could have helped improve the user interface, for example. Unfortunately, this release doesn’t take advantage of any of the Switch’s more unique capabilities. 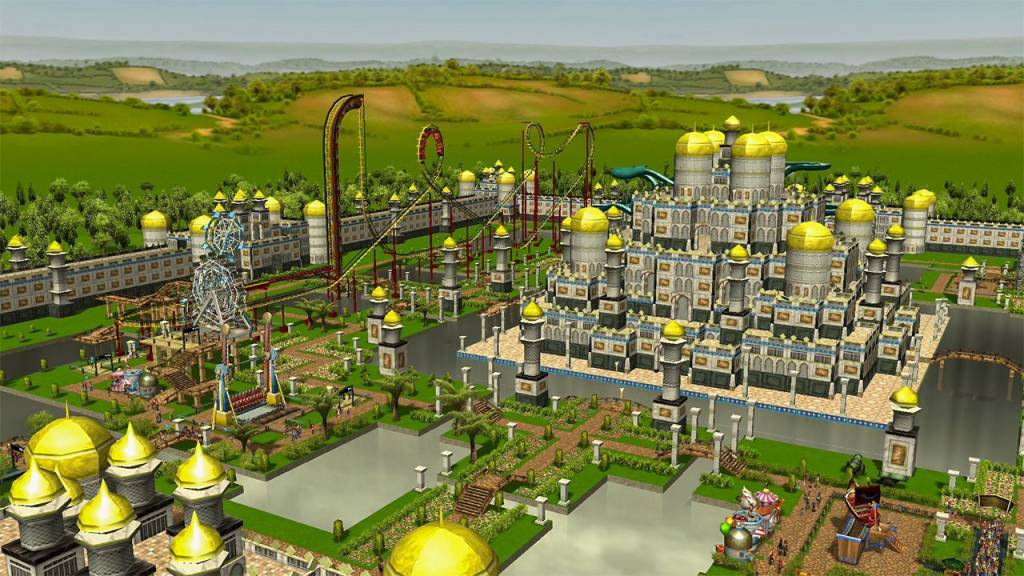 Like any good theme park, Rollercoaster Tycoon 3: Complete Edition has some ups and downs, but the depth of gameplay and wealth of content make it well worth the price of admission. This was my first experience with the series in many, many years but it’s refreshing to see that it still holds up quite well. It’s a crash course in capitalism with addictive elements, but the complicated toolkit and sluggish controls may be off-putting. Despite some minor setbacks, the price is right- Rollercoaster Tycoon 3 is a bargain on Switch, and a gem to play if you’ve got the time and patience.