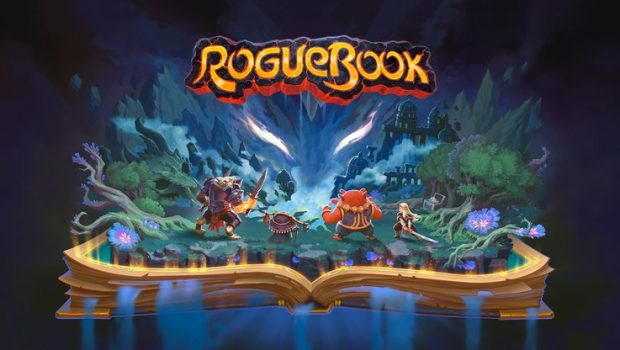 Summary: Rougebook is a solid game that had me captivated.

Roguebook is a classic do not judge a book by its cover game. The game is a pleasant mix of comforting old school styles of gaming harkening back to the old Nintendo games. When characters shared the screen on a tiled gaming world and communicated the story in pop up story balloons.

The story and presentation of the art is magical and whimsical. A grand tale presented by a campfire. Of places fantastical and adventures to be had and lands to explore, to reveal the unknown.

Then you have the mixing of the card game elements and it is surprisingly engaging as presented to the player. 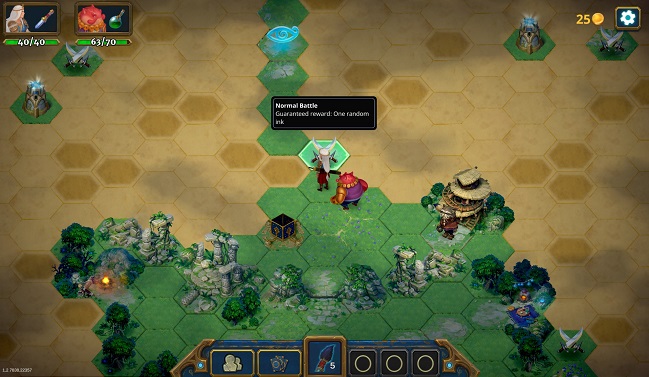 The player now trapped in the Book of Lore of Faeria, with each page of the book bringing on new challenges and revealing more of this mystical world. Venturing forth, the player must build on their card deck to be able to take on the ever-growing challenges.

Thankfully, Roguebook has some major pedigree going for it, since one of the people attached to the game is the father of the granddaddy of all card games “Magic the Gathering. Mr. Richard Garfield.

Starting out the player meets another character trapped within the book; they in turn give the player the rundown of the place. Then how to perform tasks. Giving you a Brush and explaining how to reveal new parts of the world and move within it, using some of the books own ink against it.

Most times tutorials are monotonous, not so here. Thankfully, these opening evens in Roguebook come off as part of the natural flow of events. 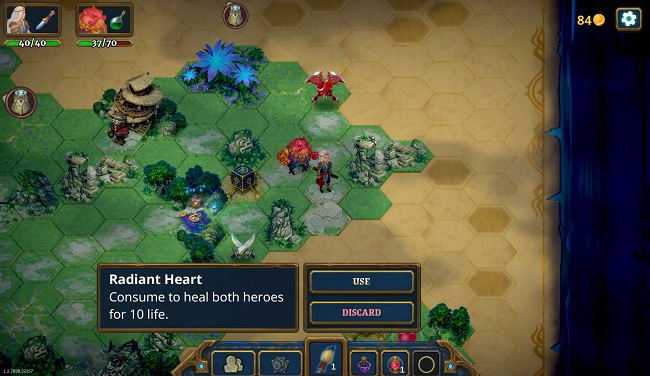 Using the brush the player character can reveal tiles around them in a radius of 2. To do so, ink must be used to explore. The player can gain ink from battles. In the opening moves after revealing some of the tiles around, one can see what lay on tiles before even going to it. Hovering over a tile with an icon, it give the player information about the tile. Such as Random battle and what possible reward to expect. (Like 1 ink).

There was some confusion on movement and revealing paths at first because one would think to use the brush. Maybe a click and drag from the brush icon. However, this was not the case. Rather the brush just shows tiles around you.  Clicking on the ink Icon gives you a menu and revealing three tiles in a straight line. Once the player chooses the path, and THEN move to the last tile. That is when you can use the brush to open up the area around them. 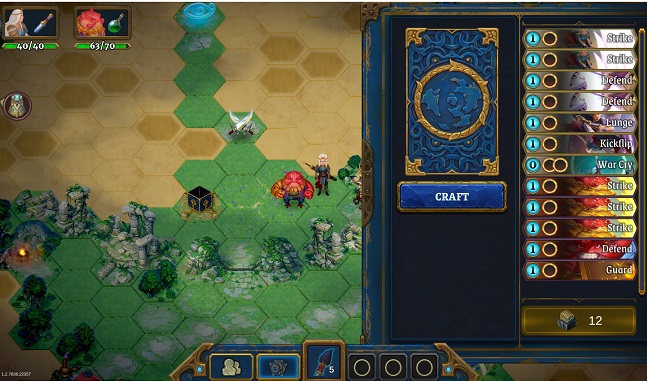 So, some tiles have icons of items to be found or a combat encounter. Once moving on to the tile, the player either collects an item or goes into a combat.

Once in combat, cards appear at the bottom of the screen. Players see their player character and their companion character at one side and the enemy at the other side.

Hovering over any of the cards does two things. It highlights the character whose card it is. It also gives the player a pop up explaining what the card effect is. Be it defensive or attack.

Much like strategy in a role-playing game during battle this hybrid of a game requires some of the same basic strategy to come out on top.

In each game run, the player has two heroes, which display what hit points they have just below them with the number of points and a green life bar.

The Hero character at the front protects the hero at the back. So make sure during battles you are switching the characters positions. Having a hero character with low hit points at the front taking the brunt of an attack is never a good idea.

Battles take place with every one taking a turn. When the player ends turn, the enemy gets a turn. This is back and forth until there is a victor. Having some powerful cards come in handy, especially later in the game. Past the hand holding level.

After taking damage, the player is going to want to look for these heart icons on the map. Grabbing these enables them to heal both characters at once.

Throughout the lands, there are points that a player can spend money and construct cards to add to their decks. To enhance the card effects there are 40 types of gems in the game world. It is all about the power, but make sure to balance that power with a good mix of attack and defensive cards.

There is a shop that the player can purchase what is available, from new types of cards, to gems for enhancing cards. Be aware, for the better gems and cards costs money. So scrape up any gold on the map. 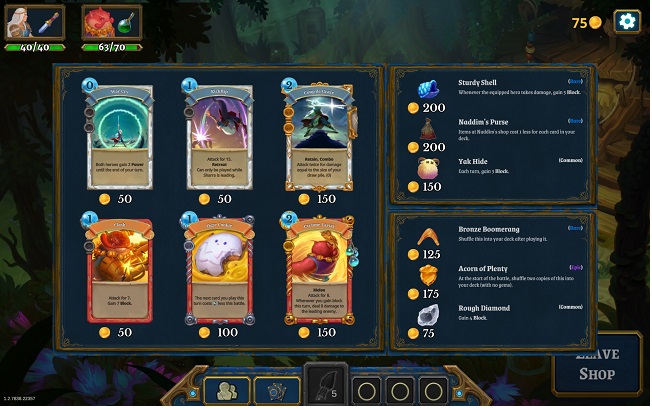 Each hero that the player may take on these adventures has their own unique talents. Adding cards to the deck unlocks those talents and perks. Each run in the game world offers opportunity to get experience points. Experience points enables the player to level up the heroes and unlock new cards for them. To unlock all the perks, there are things that must be done. Tracking down and securing pages enables, the player to purchase permanent perks for the heroes.

Simple in looks but something rather comforting about the whole design as it harkens back to yesteryear in design, married with modern flourishes. Rougebook is a solid game that had me captivated after the initial opening.

At the start of the game and the introduction movie, my heart sank a little, as it looked very Lord of the Ringish. I was worried that it would be a rip of that franchise. Right down to the round little doors on the side of a hill. Thankfully, introduced to the lore of the Roguebook, all concerns washed away with the promise of magical adventures and discovery.

Roguebook is a solid game with strong Card battle elements with a twist of RPG, and a slice of tabletop mixed in. Who would have thought it would be so addictive? I should have known, with company names Abrakam and Nacon, which already sound like prescription drugs. Yea, I am now thoroughly addicted to Rougebook. 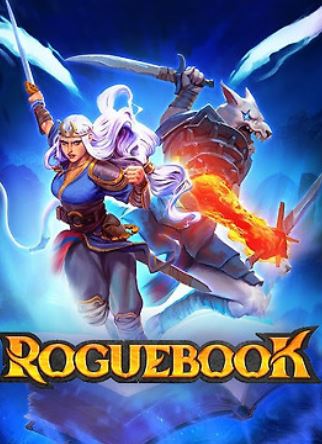