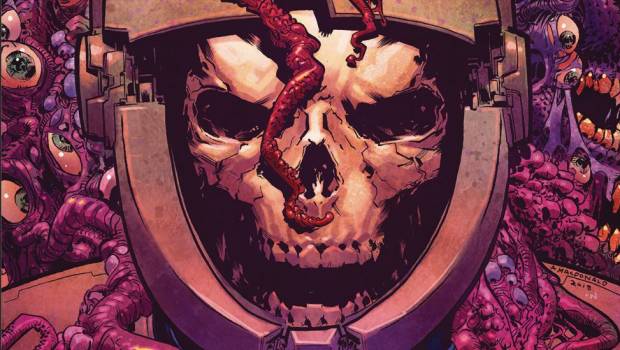 Summary: On a strange planet a blood ceremony takes place to placate the Old Gods. Things just get weirder from there and that is saying something...

On a strange planet a blood ceremony takes place to placate the Old Gods. Cut to a salvage freighter and the crew awakes from hibernation to find it snowing on the ship. They are following a signal to a planet that is not orbiting around a star or near anywhere else. Their aim is to find some valuable salvage but what they actually find is much worse.

If you are a fan of the HP Lovecraft Cthulhu mythos then I would recommend this one as what the thing is on the planet is not explained just that it has always been there and it calls to others to come and find it.

The artwork for this one is great and suits the story especially the tangle of flesh that is the great being or whatever they end up calling it. The crew of the salvager seems to be well realised but I don’t think a lot of them are going to be around for long.

There is an impending sense of dread throughout the story and what you think is going to be just an Aliens rehash turns out to be something different. I do like they refer to a disaster in a previous operation but it is a purely profit driven motive keeping them there. “The company” operates in this universe too it seems.

This was an interesting story to begin with and raises enough things during the progression of events that I would like to see what happens. Worth a look if you would like something different.