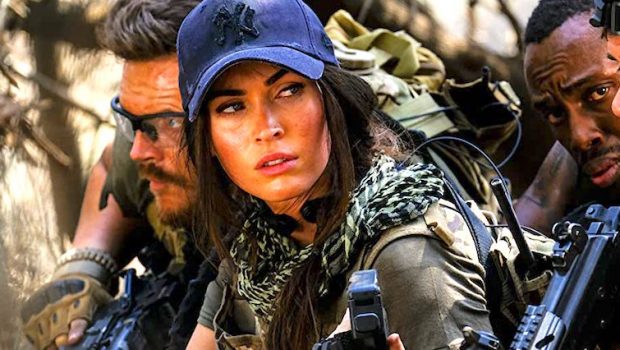 Never work with children or CGI animals. It is a painful lesson M. J. Bassett, an English transgender filmmaker, should have heeded before she and her daughter, Isabel Bassett, wrote Rogue’s screenplay together. Their lousy writing, poor casting, and crummy special effects impede a precise target: a crisp, robust action vehicle for actress Megan Fox (Transformers; Jennifer’s Body) to dominate. Instead, Rogue mashes two different genres together without skill or finesse. Even as a kinetic action movie with an interesting setting, the plethora of gun battles fails to raise our pulse or generate a whisper of tension.

The story’s careless exposition is apparent when we are immediately dropped inside a hunting camp in East Africa. Hunters are capturing lions, placing them in cages, and executing some of them to sell their body parts. The main villain is Zalaam (Adam Deacon) an Islamic terrorist with a British accent no less. He is unaware that a team of heavily armed US mercenaries is infiltrating his base to rescue Asilia (Escape Room’s Jessica Sutton), a governor’s teenage daughter. However, the team’s leader, Sam (Fox), is stunned to learn Asilia is accompanied by two other girls (one of whom is played by Bassett’s daughter). Sam reluctantly chooses to extract all three. When their escape helicopter is destroyed, the team is stranded. They take shelter inside a house without power and search for a generator. Out in the darkness, there is a lioness ready to tear everyone apart. Three is a violent crowd when Zalaam’s forces confront the wounded unit for one last firefight.

Rogue was always destined to be more Die Hard than Shakespeare, but director Bassett fails to deliver gripping set pieces. The special effects are the most obvious technical shortfall. The lions are as laughable as any recent CGI image. Not only do they look ridiculous but move in ways defying logic and physics. In one hysterical moment, the lioness effortlessly bursts through a door blocked by a wooden beam. Bassett also shoots action with stunning ineptitude. What should have been a hair-raising leap from a cliff is squandered by poor framing and cheap stunt work. In this moment, Bassett literally misses the jump. Similarly, when the escape helicopter is struck by an RPG it does not spin uncontrollably. Instead, it swiftly erupts into an obvious CGI fireball. The middle act’s horror scenes also underwhelm. Bassett employs derivative compositions from scarier films. One soldier mistakenly uses night vision to search for lions. The poor fellow should have known better. The most bizarre death is when a soldier is pulled into the darkness without a sound. Is that you, Batman? Weak scares aside, the clumsiest moment is an inexcusable continuity error. The climactic battle is pitched inside a barn at night. Minutes later, Sam walks out into daylight. Evidently, Rogue lacks the fine details needed for a well-executed thriller.

Dull action aside, Rogue is further undermined by a terrible screenplay. Bassett takes no time to establish the soldiers before bullets fly. Instead, Rogue compares to watching a series of lousy video game cutscenes. There is no context about where this mercenary team has sprung from or who the main characters are in detail. Sam is a bland leader without memorable traits. More weight is given to one of her troops, a former jihadist whose family was murdered, than her own history. Her backstory is summarised as ‘she’s seen some stuff!’ Similarly, Zalaam is off camera in the second act. His absence typifies Rogue’s disjointed, ‘anything goes’ approach to its themes. A yawn-inducing story about American militarism is inexplicably glued to an animal poaching narrative. The subjects’ disparity stresses Bassett’s desperation to make the hunters despicable. The film ends with a truthful warning about how sickening hunting is. Yet the sentiment is undermined by a middle act that copies Aliens (1986) and Jaws imitations, such as Deep Blue Sea (1999) and Lake Placid (1999). Watching Sam’s team being ripped apart will not inspire anyone to open a petting zoo. Meanwhile, the way Rogue continues hurling random ideas against the wall is hilarious. Asilia squeals about standing up for herself for once and runs out into a firefight to help. She then sobs after stabbing a faceless henchman. The moment is hysterical because terrorists are otherwise mowed down like a carnival duck hunting game. The way ideas change on a whim stresses the inconsequential, unfocused nature of the poor writing. 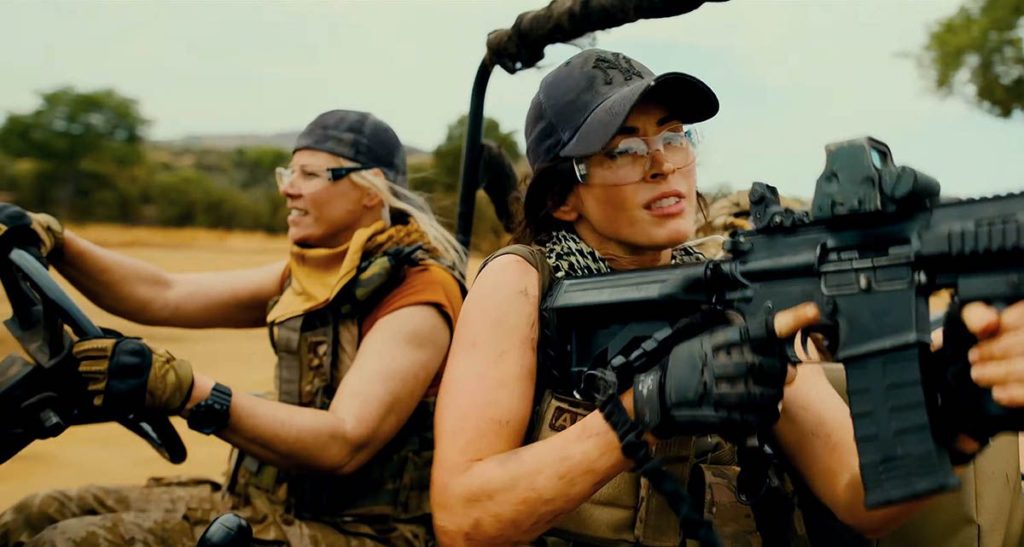 Rogue’s dull cast fails to overcome and enhance the weak action and scripting. Megan Fox is highly experienced with visceral set pieces having collaborated with Michael Bay on several Transformers features. Fox’s performance is not a poor one but miscast and misdirected. Her voice is too tiny and muted for a stern, coldblooded team leader. Bassett instructs her to whisper all her lines, which makes her delivery as powerful as a piece of wet lettuce. One could imagine Charlize Theron or Emily Blunt steeling Sam with more grit and authority. Though Fox deserves credit for saying the line ‘all hail the Queen!’ without laughing uncontrollably. Humour is welcome in films as gung-ho as this, but the side actors overact, and their levity is carelessly misplaced. There is a reoccurring gag where the soldiers sing the Backstreet Boys’ song ‘Everybody’. It is meant to be humorous but jars against the violent tendencies. The most side-splitting scene follows the cliff jump. A character declares they cannot continue, which proves costly once eaten by a crocodile. After the thrashing, a soldier exclaims, ‘we have to do something!’ His genius is matched by Adam Deacon’s lacklustre, one-dimensional villain. In the climax, Zalaam allows Sam to leave his sight so she can hatch a masterful plan to have him eaten by the lioness.

In an act of mercy for our struggling cinemas, this terrible film was released straight to digital streaming services. Even within its own modest limitations, opting for brisk action over story and deep characters, it sinks. Too many scenes are poorly staged due to weak special effects and Bassett’s indistinctive, careless direction. The technical flaws are also compounded by awful dialogue and mediocre performances. With a more powerful lead and stronger characters, Rogue might have been tolerable. Netflix’s The Old Guard (2020) is comparable but offers a richer concept and stronger execution. A Megan Fox film I would like to watch is the horror-comedy Jennifer’s Body (2009). It would be pleasing to see her efforts outside the action genre, especially after a film as brainless and insipid as Rogue.

Summary: Rogue's lousy writing, poor casting, and crummy special effects impede what should have been a precise target.