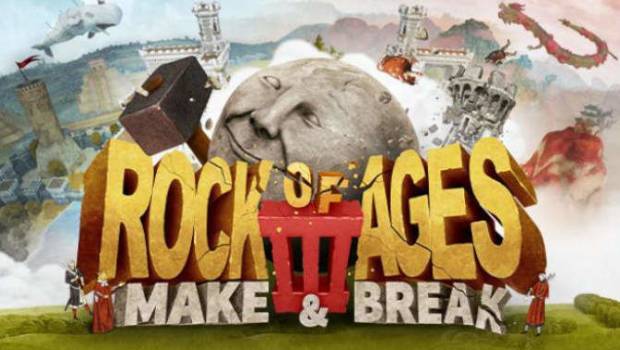 Summary: Rock of Ages III: Make & Break is more or less the same Rock of Ages experience you've come to expect, only this time it includes a level-editor.

Before I even sat down to start playing Rock of Ages III: Make & Break, I asked myself what I would want to see from a third entry in the Rock of Ages series. The first game got the ball rolling by establishing the simple yet satisfying gameplay, the second game built up momentum and focused on expanding the multiplayer – so where do you go with the third game? Turns out, the solution is to stay the path by expanding the multiplayer and implementing a level-creator mode whilst also retaining the charm, character and gleefully destructive gameplay that made Rock of Ages so unique in the first place. 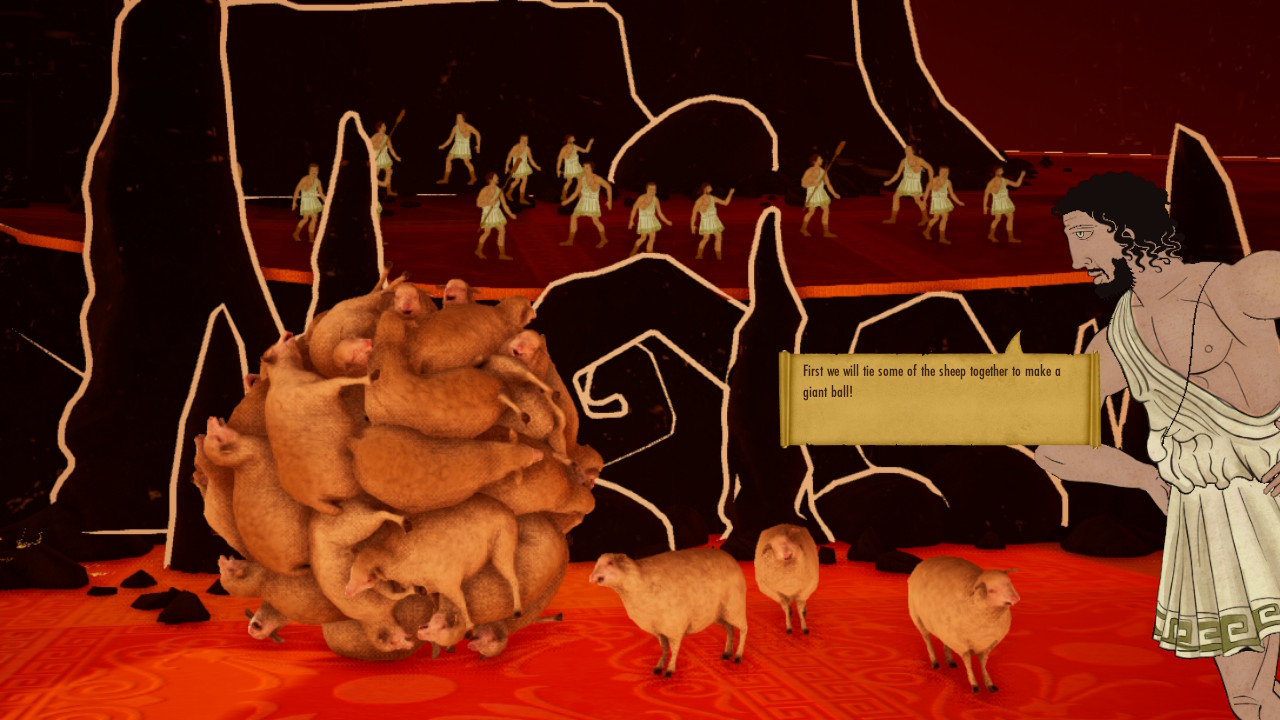 If you have no idea what Rock of Ages is all about, the screenshots in this review may be a little baffling. The core gameplay, aesthetic and character of the Rock of Ages series hasn’t changed since its inception, and the basic premise is to control a boulder through an obstacle course to reach the finish line. It’s a very simple conceit, but the fun comes from the absurdity and complexity of the obstacles littered throughout the courses you’re careening through. 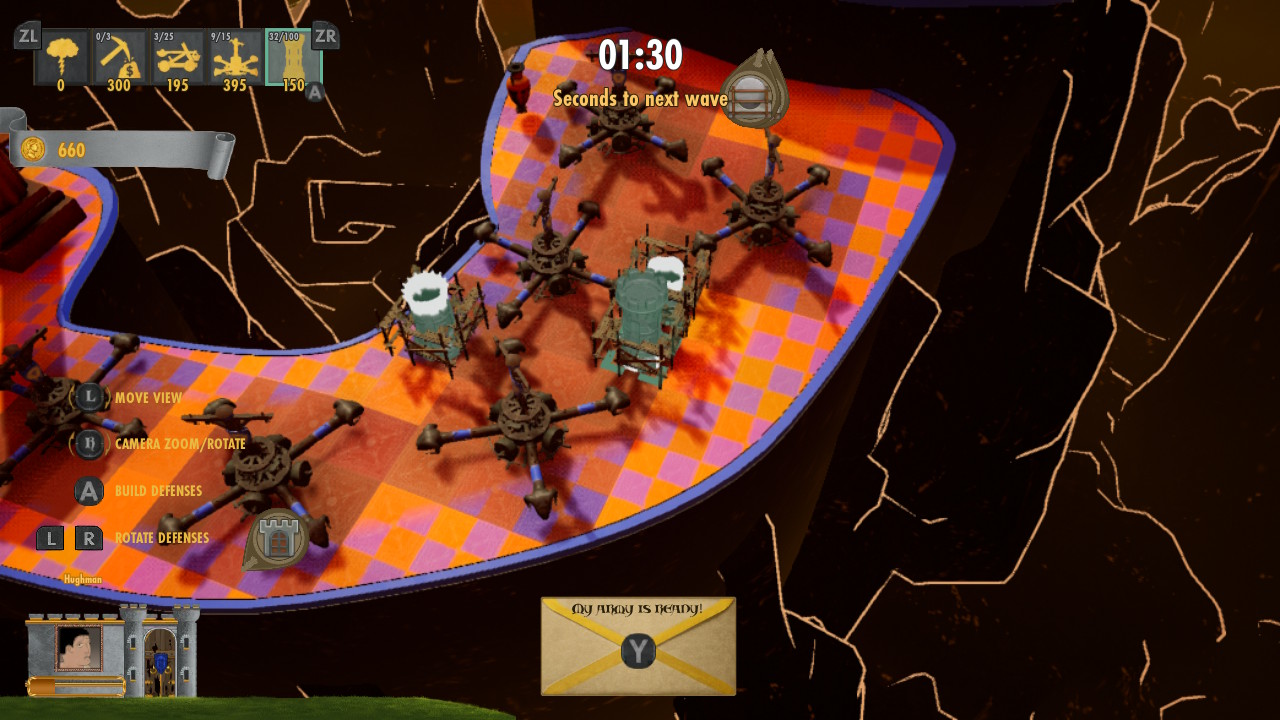 Rock of Ages sports an exceptionally unique visual aesthetic comprised of artistic iconography spanning numerous historical time periods. The introductory tutorial levels are thematically styled around ancient greek pottery painting and the campaign levels are loosely based on a story about Odysseus escaping the wrath of a Cyclops. Later levels feature historical figures like Napoleon and have levels themed on Roman architecture and Renaissance paintings. There’s an excellent variety to the level themes and historical influences that provides great motivation to progress through the campaign just to see what interesting aesthetic or historical character will show up next. 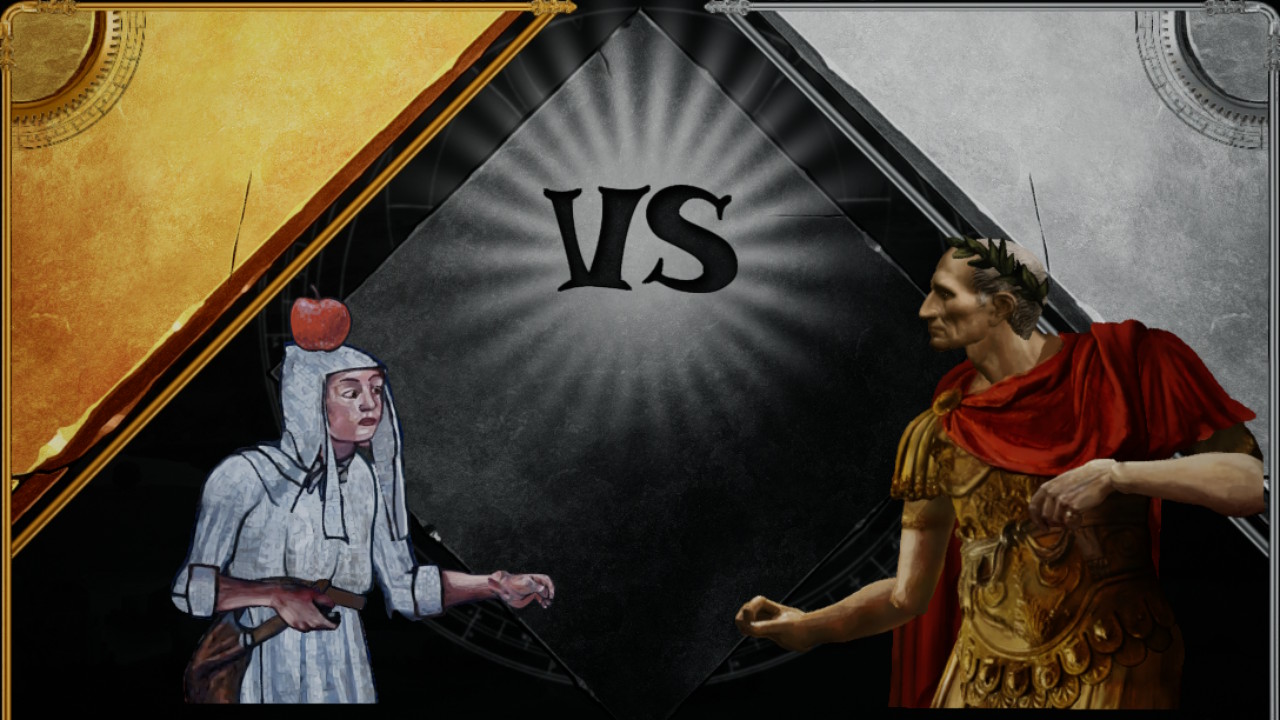 The story is delivered through humorously crude cutscenes featuring Monty Python-esque, cartoon cut-out characters, wordlessly portraying the narrative. The gameplay section that follows is loosely tied to these events – in one of the early levels, Odysseus is trying to escape a Cyclops’s cave where the exit is blocked by a large rock. The following level challenges you to guide your boulder through a downhill obstacle course filled with traps and obstructions and reach the end with enough speed to knock the rock loose from the cave’s mouth. 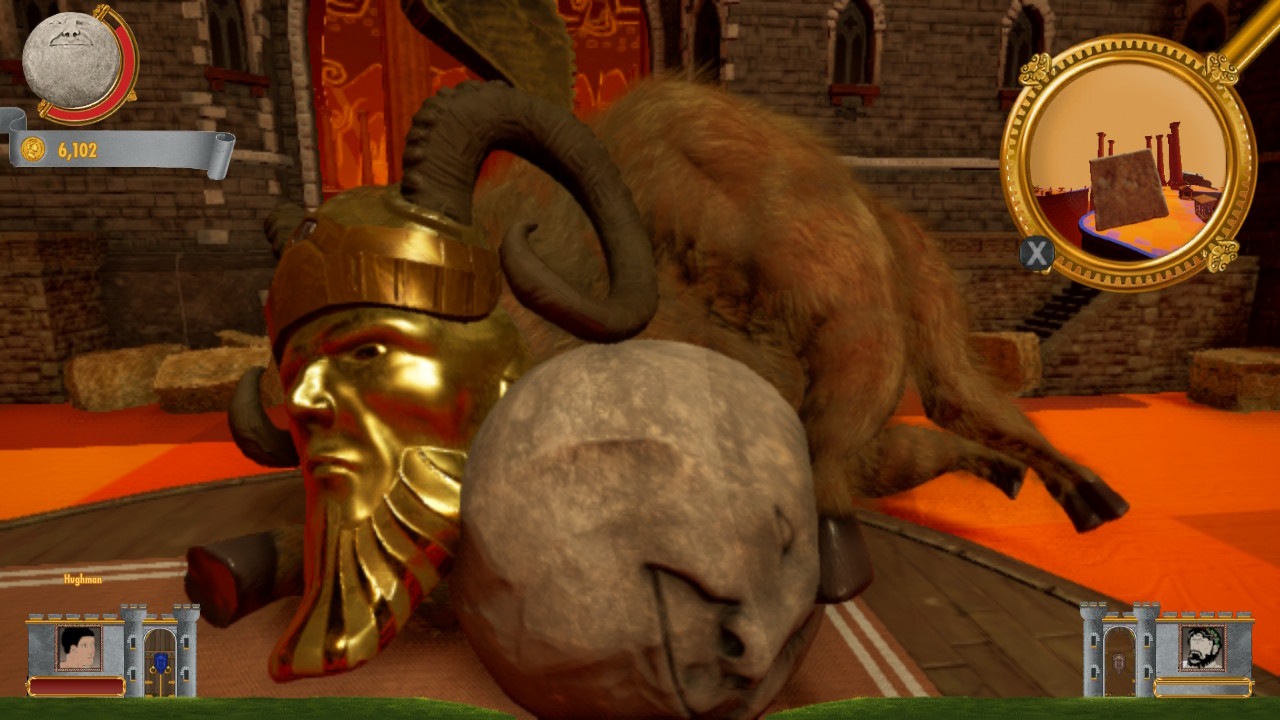 As the player, you have control over the boulder to a certain degree. The left stick influences the boulder’s trajectory, however momentum and various other external forces have the final say on where your boulder goes. You can also make the boulder hop a short distance into the air with the tap of a button, which is a crucial maneuver in some of the more densely populated obstacle courses. You can also unlock a variety of boulders by playing through the campaign, each with different stats and perks. If your mission is to break down the door of a castle, a heavier boulder will provide more damage at the end of a run than a lighter boulder. However, if your mission is to simply race an opponent through a trap-laden course, a lighter boulder with more maneuverability may be the better option. 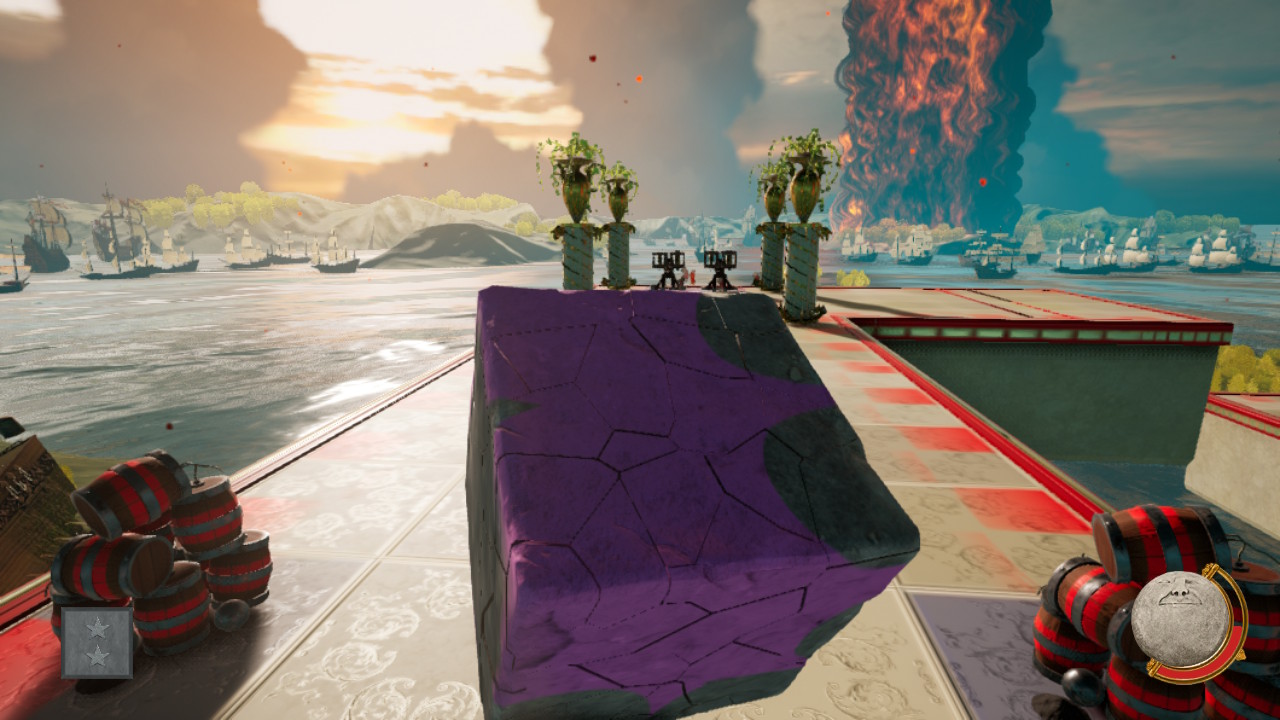 Rock of Ages III: Make & Break also features a variety of other gameplay modes in both the campaign and multiplayer. There are numerous modes that task you with overcoming a course and completing a challenge at the end, such as using a bomb-boulder to blow up a castle in a limited time, or scoring a certain amount of points on a skee-ball board at the end of the course. However Rock of Ages III also heavily focuses on creating your own courses and strategically designing defenses to prevent opponents from completing them. These modes put the game’s powerfully simple level-design tools in your hands and give you full reign to unleash your most devious challenges in order to thwart both AI opponents and friends online. 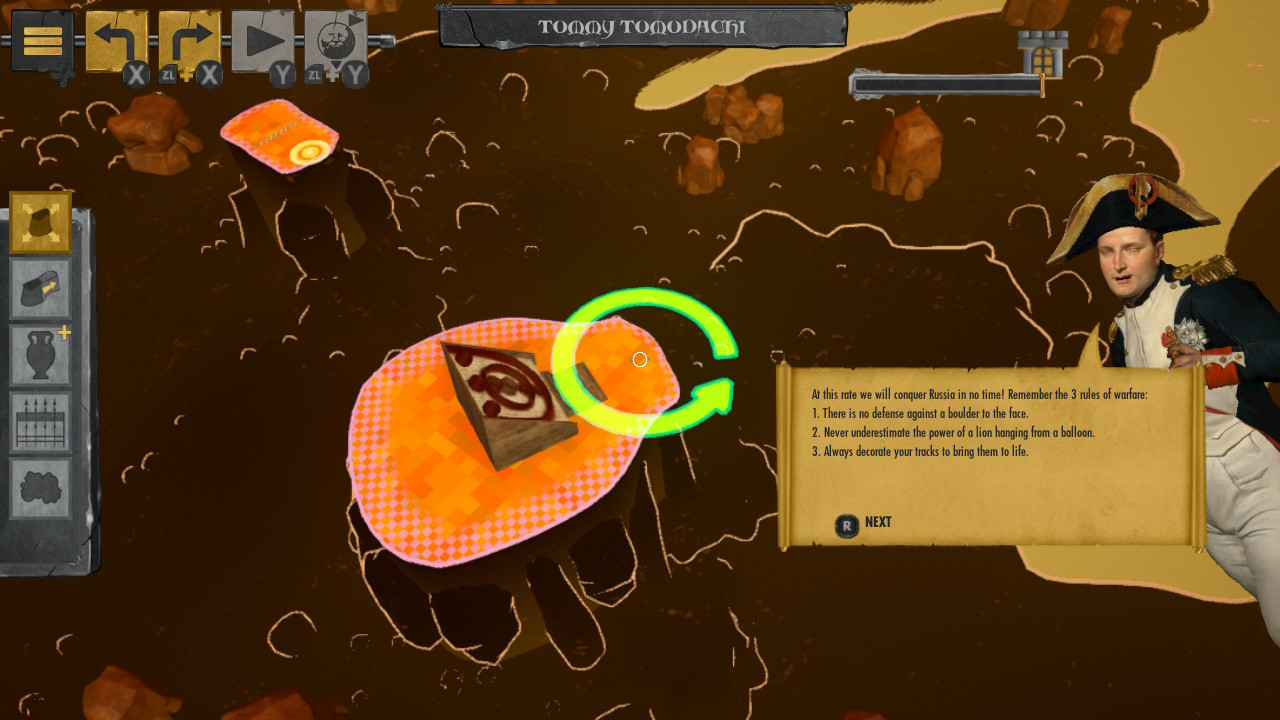 Creating your own course in Rock of Ages III: Make & break is extremely simple and works superbly on a controller. All the tools are fairly self-explanatory and are mapped intuitively to the various face buttons or accessible via an unencumbered menu system. If you can dream it, you can make it and subsequently upload it for the world to play – so long as it’s within the object limit and you can complete the course yourself. Players can rate and tag their favourite levels, so if you simply feel like diving into something quickly, the server browser displays trending levels to give you something fresh to check out. 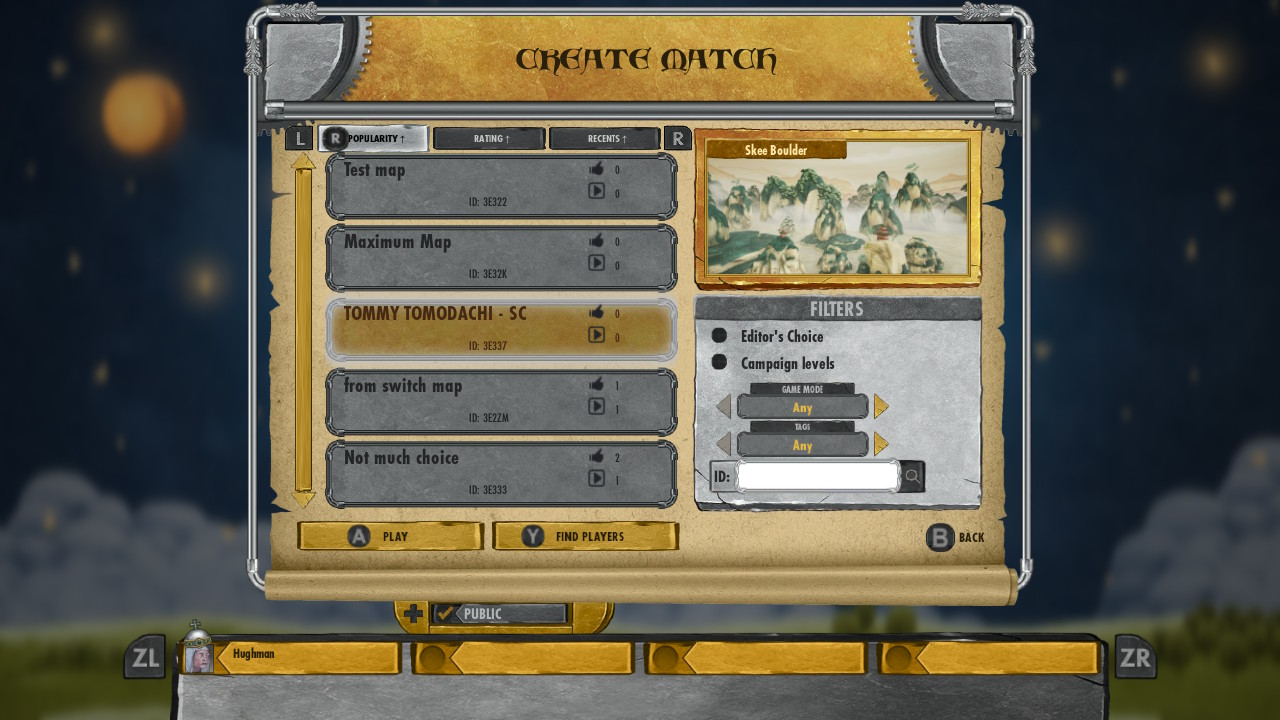 As fun as it is to create and share your own levels in Rock of Ages III: Make & Break, there are a number of issues that plagued my experience with the game. The most egregious is the camera and cursor control in the creator mode being wildly unhelpful at times. The camera is locked in a fixed-perspective looking down on the map and while it can be zoomed in and out and rotated, you can’t change the pitch, which can make tweaking and laying out features a real pain the backside. I also had the game crash to the Switch’s home menu a number of times and experienced a litany of other little quirky bugs such as health bars staying onscreen after a level is finished or text boxes not showing up when a character is providing tutorial information. Also, the size of the onscreen text when playing the game in the Switch’s portable mode is abhorrently tiny – I’m desperately hoping this issue is fixed in an early patch. 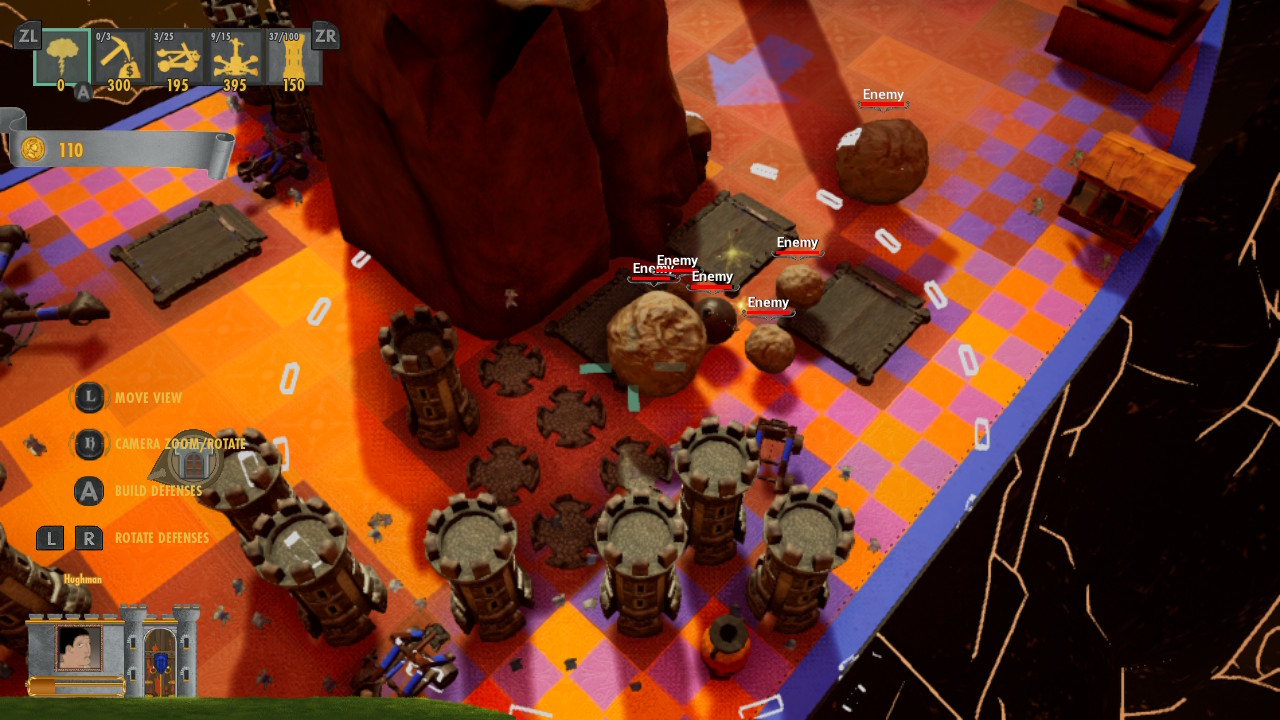 On the topic of tutorial information, if this is your first foray into the Rock of Ages series, expect to be thrown in the deep end when it comes time to delve into the gameplay. The lack of tutorialisation is somewhat astounding, particularly when it comes to the campaign levels where you’re expected to set up defenses in order to protect your base from an onslaught of attacking boulders. However this lack of tutorialisation isn’t a deal breaker, merely a small hurdle for a select few game modes that will be prudently overcome – after all, how hard is it to figure out how to roll a boulder down a hill? 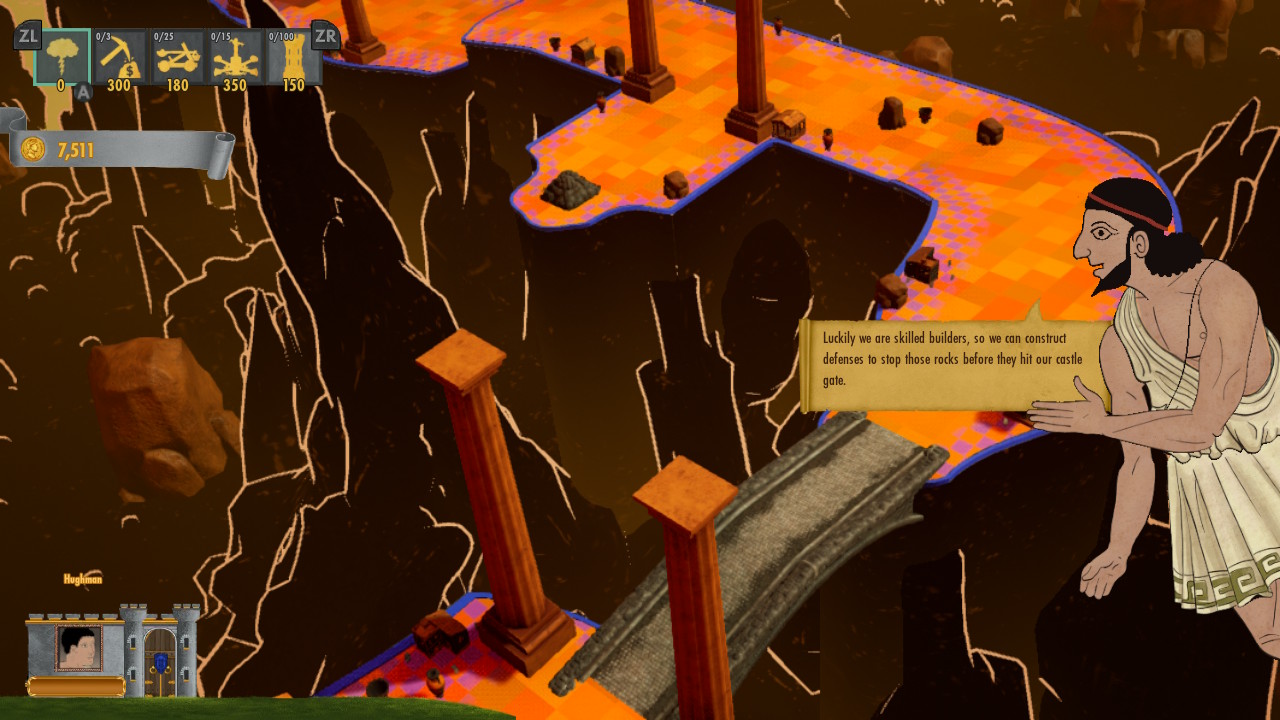 My final issue with Rock of Ages III: Make & Break is perhaps the least damning, but the most poignant for me personally. I don’t like to be so reductionist with my criticism, but this simply feels like just another Rock of Ages game with a level-editor tacked on. There’s nothing here that truly elevates the series above previous strides made in earlier iterations, and if you’ve played through the first two games, there’s not going to be anything here that blows your socks off. As with any community-driven game, the real fun will be experiencing all the wacky user made levels and ideas that people come up with – but with such rudimentary gameplay it’s hard for me to imagine anything being created that is truly outrageous. With that being said, if you enjoyed the previous two games you’ll undoubtedly enjoy this one too, as the formula has been replicated with precision to deliver the same gameplay and storytelling experience you’ve come to expect from the Rock of Ages franchise. 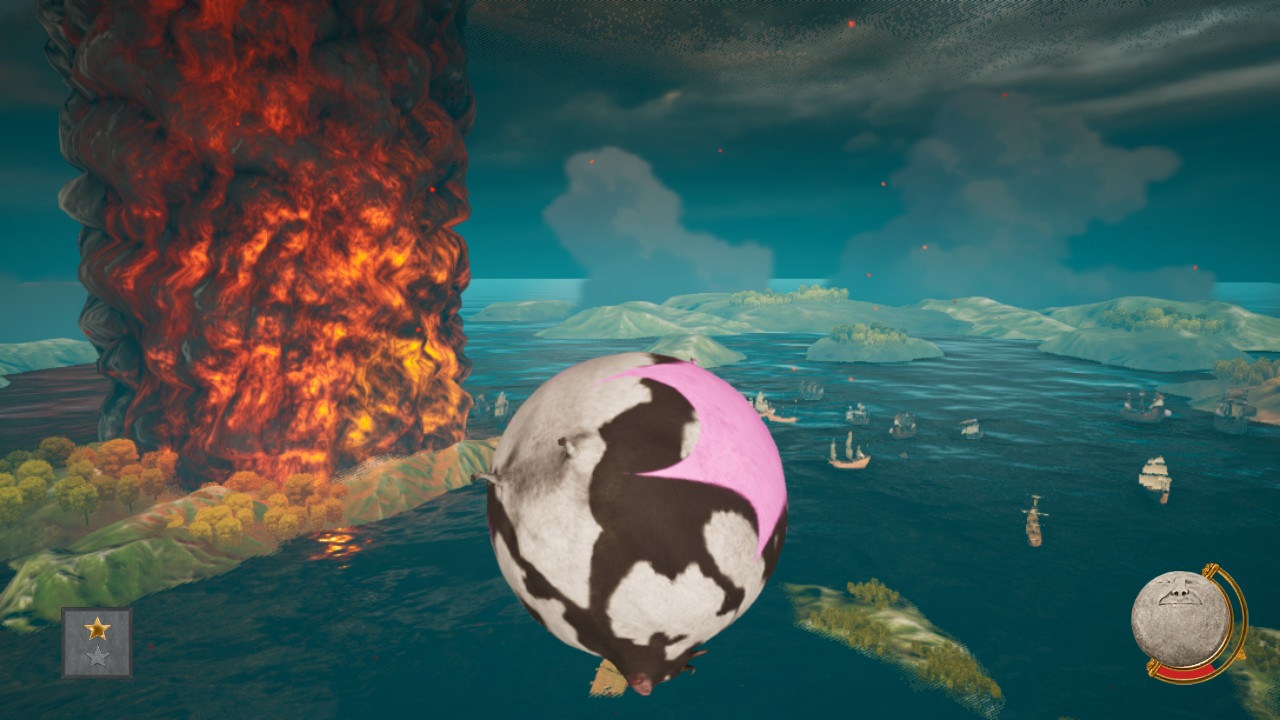 Rock of Ages III: Make & Break is another solid entry in the Rock of Ages franchise that doesn’t stray far from the well-worn path. The focus on additional creator features and online modes will be a boon for the creative types that want to pit their friends against some ingenious grand ideas for trap-filled courses. And for those of us that simply enjoying rolling and smashing, the core Rock of Ages gameplay remains intact and is as satisfying as ever – despite being somewhat buggy on the Switch version. However, if you’ve played the first two Rock of Ages games and were hoping for something a little more tantalising to bring you back to the series, Rock of Ages III: Make & Break just doesn’t have that wow factor to make it an essential purchase. With that being said, I still recommend that newcomers to the series check this one out, as the absurd humour and unique aesthetic is worth the cost of admission alone. 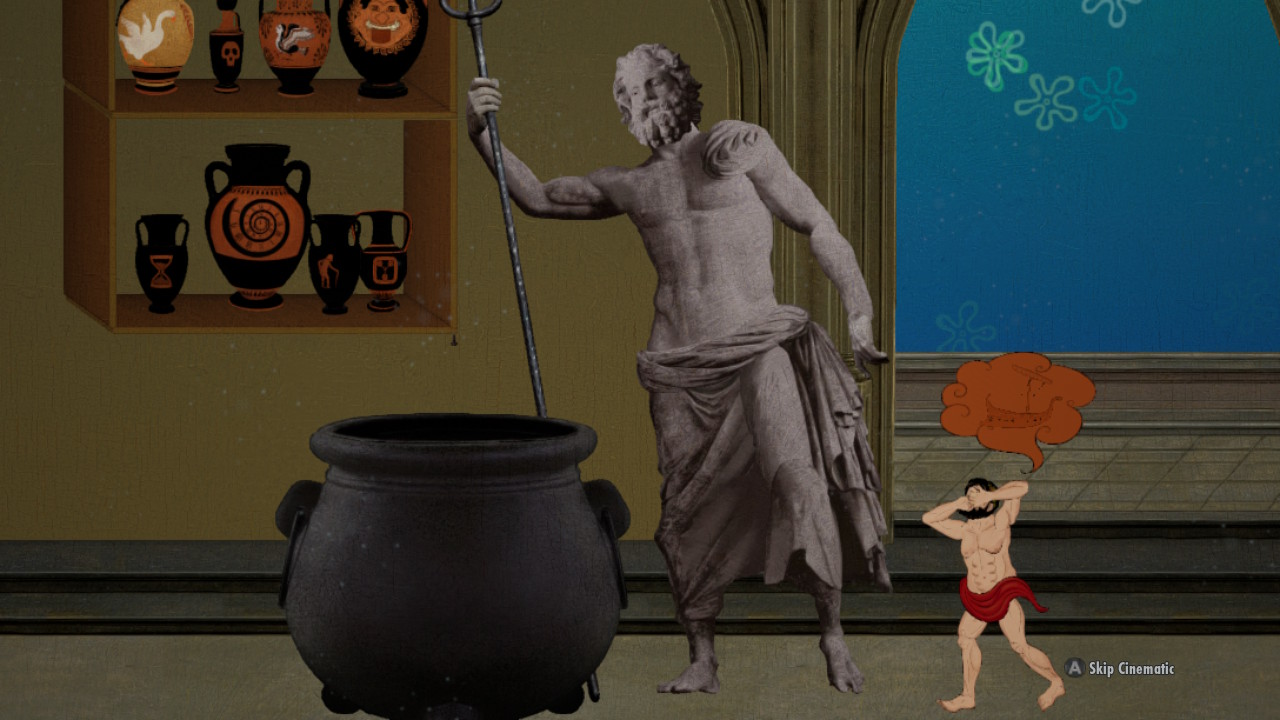 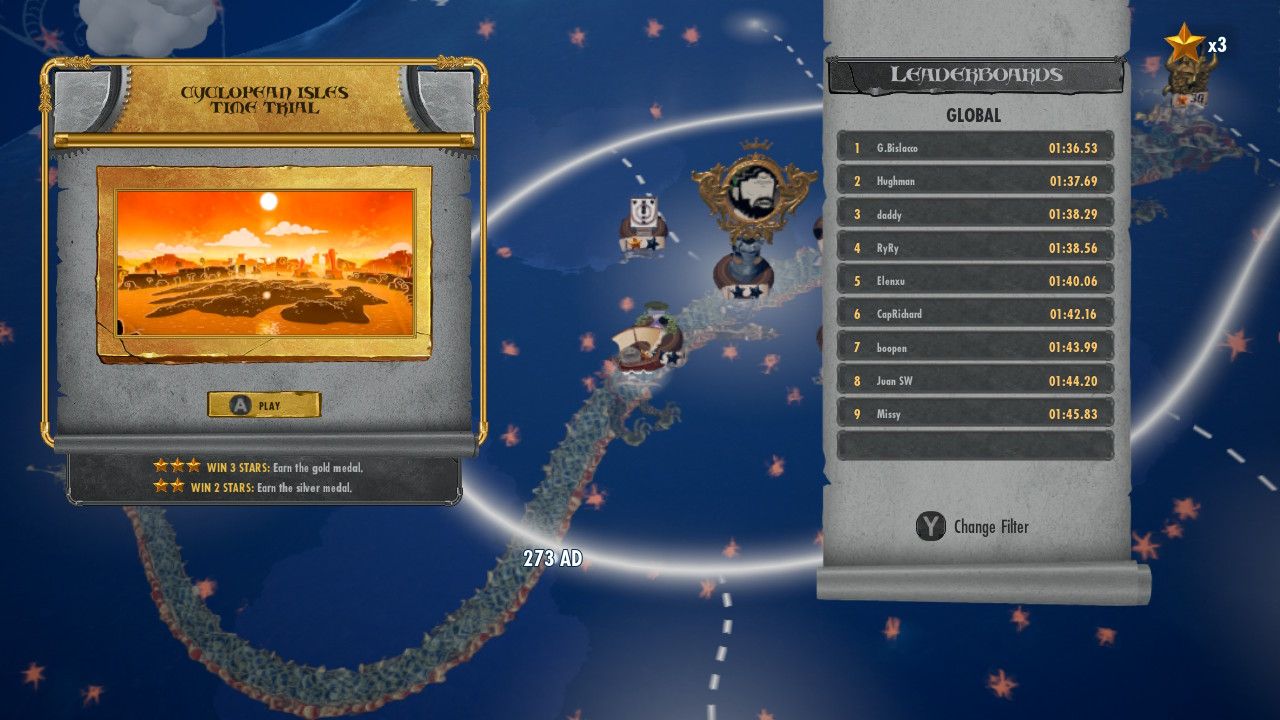 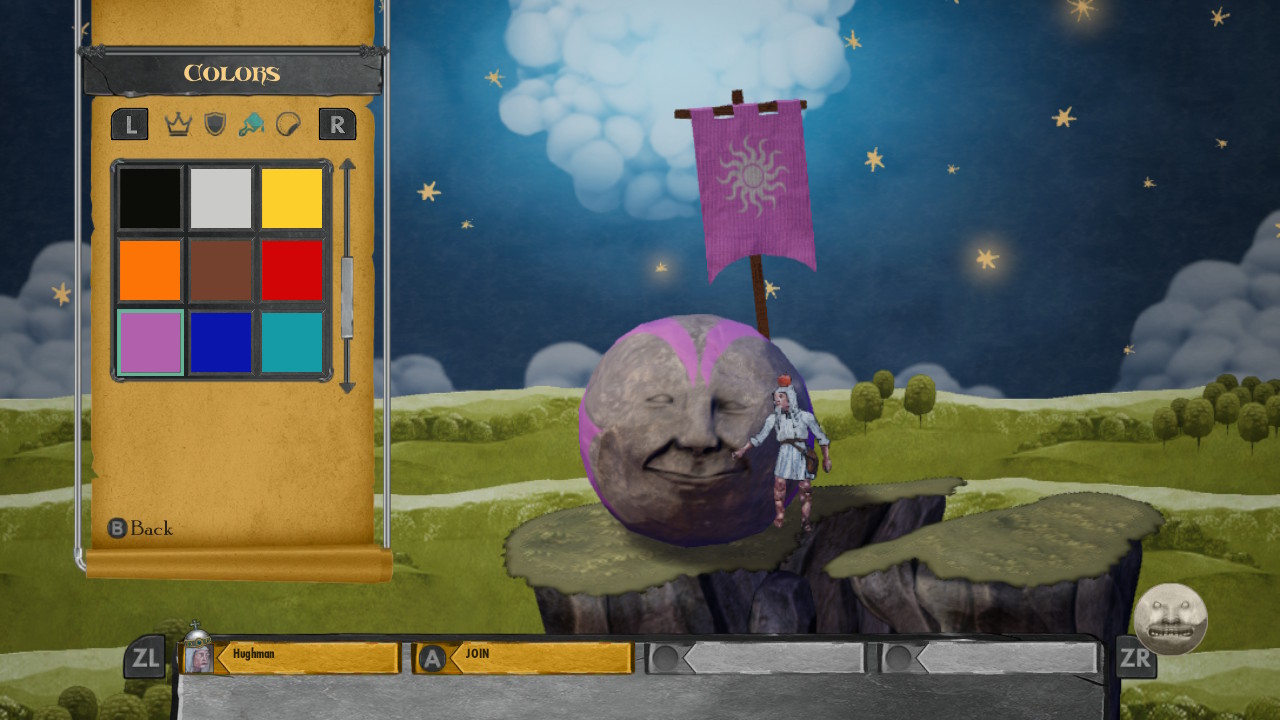