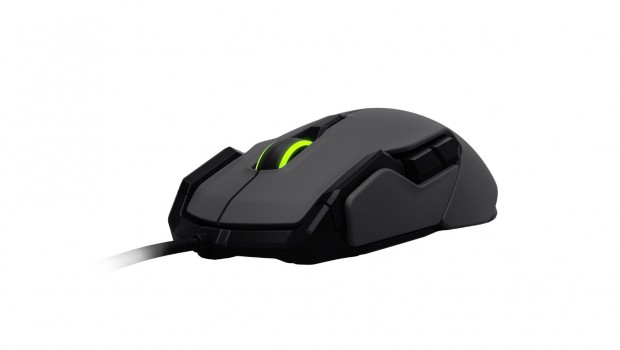 Melbourne, 14 October 2015 – ROCCAT kicks off the release season in 2015 with the launch of  its all new Kova performance gaming mouse, the successor to the popular Kova[+]. The Kova[+] took the gaming scene by storm when it was released in 2010 and went on to develop a hardcore cult following thanks to its streamlined aesthetics. Forged using the legacy of its predecessor as its blueprint, the new Kova represents a re-imagined fan favorite for gamers who value pure performance above all else.

The new Kova features a sleek, ambidextrous design suitable for left- and right-handers alike. Built for power and speed, the mouse places a strong emphasis on raw performance. The result is streamlined, sports-car like aesthetics with doubled-up core functionality.

The all new Kova – doubled up functionality

The mouse is equipped with a latest generation Pro-Optic R6 sensor with 3500 native dpi featuring Overdrive mode. Overdrive allows for a stable dpi double-up, resulting in an effective dpi of 7000. This technology is made possible by the powerful Turbo Core V2 32-bit ARM-based MCU in the engine room.

Two Smart Cast buttons sit on either side of the Kova’s mouse 1 and mouse 2 buttons. They form part of an overall intuitive button layout designed for lightning-fast reactions to in-game events. Optimally placed within finger-tip reach, the Smart Cast buttons add a new level of reflexive control for fast-paced games and facilitate rapid combos and easy switching between, for
example, weapons or ammo types, and so on.

The Kova features double the illumination power thanks to a vivid RGB lighting system. The 16.8 million color illumination suite lets you configure the scroll wheel and mouse rim lighting independently of each other.

ROCCAT’s famous Easy-Shift[+] technology takes the Kova’s total number of button functions up to an impressive 22. The mouse is available in both black and white and is compatible with ROCCAT’s new Swarm driver system.

ROCCAT founder and CEO, René Korte, comments: “The Kova[+] was cherished by gamers for its sleek aesthetics, and that’s something we wanted to keep when re-imagining the mouse for the games of today. The new Kova is a worthy successor to the name, carrying on the tradition of streamlined performance. It features a high-octane, sports-car like build with staggering power under the hood. We’re sure it’ll delight hardcore gamers as well as fans of the original.”

The all new ROCCAT Kova will retail for 109.95 AUD and hits EB Games stores in Australia at the end of November 2015.