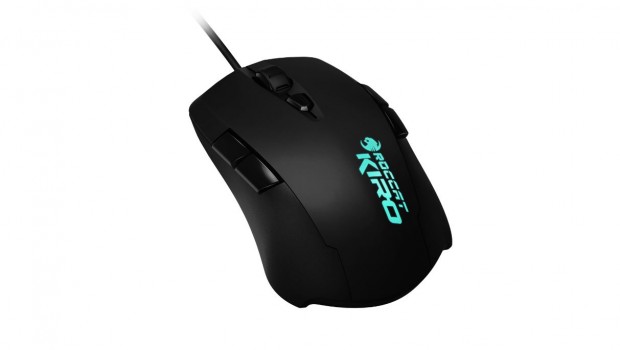 Melbourne, November 4 2015 – Meet the Kiro and experience another highly modular gaming device made by Germany’s peripheral powerhouse ROCCAT. With its highly adaptive, superdextrous build, the game has been changed for ambidextrous mice. Perfectly optimizable for both left- and right-handed gamers out of the box, it ticks all the boxes for gamers who thrive on a highly functional mouse with a clean, ergonomic design. With no-sweat parts comprised of a ROCCAT-pioneered soft-touch surface, the Kiro is the flexible ergonomic mouse that lets you win your way.

Kiro features an advanced, modular build that lets you change the handedness of the mouse right out of the box. Its efficient, high-comfort design comes complete with a catalog of four durable sideparts, including both buttons and blanks, that let you customize your layout rapidly and get in the game right away. In spite of its relatively small size, the Kiro has a strong focus on functionality and is loaded with a build sporting only the best possible components, for a premium gaming experience. OMRON© switches, a robust 2D Titan Wheel plus a unique soft-touch surface that nullifies palm and finger sweat provides a platform for solid, consistent and reliable gaming.

Proudly flying the ROCCAT flag high, the Kiro features vibrant logo illumination customizable in a brilliant 16.8 million discrete colors. Complemented by a variety of active effects and color patterns which can easily be configured in the new Swarm driver, you can turn your Kiro into your own signature gaming weapon. Swarm is the software incarnation of ROCCAT’s future ready philosophy. It covers you for all relevant gaming platforms and devices, working as a next-gen system that keeps on top all games, apps and ROCCAT products in one place.

The ROCCAT Kiro will retail for 89.95 AUD and hits EB Games stores in Australia at the beginning of December 2015.