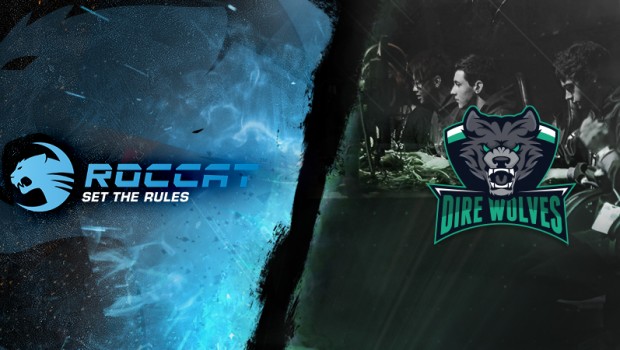 Taipei, 3 March 2015 – ROCCAT Studios, Hamburg-based manufacturer of world class competition gaming peripherals, announces a sponsorship deal with professional gaming organisation, Dire Wolves. ROCCAT will be the main sponsor of all Dire Wolves teams, including League of Legends and Counter-Srike: Global Offensive. Dire Wolves is a premier eSports organisation, competing in the highest echelons of Oceanic eSports. Established in August, 2014, the team has quickly become a renowned, highly respected name in the Australian scene.

Says Nathan Mott, owner and Managing Director of Dire Wolves: “We are very excited and proud to forge a partnership with ROCCAT as our major sponsor. ROCCAT will be providing our teams with the highest quality gaming peripherals in our championship pursuits; they’re at the forefront of the industry and will help our teams excel. This partnership opportunity will help Dire Wolves realize our endeavour to becoming a venerated eSports organisation.”

Markus Frey, Head of Marketing at ROCCAT, adds: “Dire Wolves is a very talented and motivated Australian gaming organisation that reflects the dedication and winning mindset in their play that we at ROCCAT put into our peripherals. We love competition, dedication and determination, and will happily support teams and players who put the work in to make a name for themselves in the eSports industry.”

Dire Wolves recently achieves remarkable results in Riot’s Oceanic Pro League, with a current ranking of number 2. Their CG:GO team is also performing well in the Cybergamer Premier League. ROCCAT will put its full support and dedication behind both teams to propel them to even greater heights in OPL and CGPL.