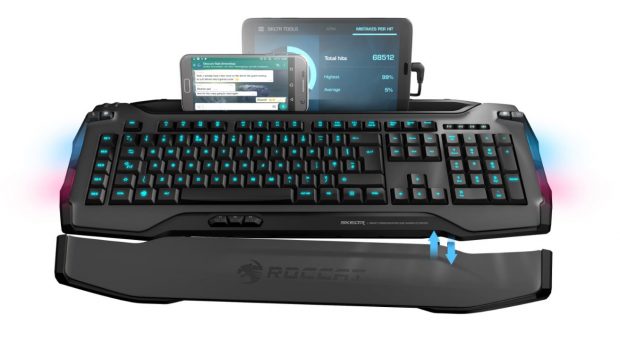 Melbourne, 25 October, 2016 – Australian gamers are set to become unstoppable thanks to the latest keyboard release from German peripheral manufacturer, ROCCAT.

The Skeltr will be showcased at Melbourne’s upcoming PAX Aus event where PC gamers will get to try the keyboard out for themselves.
The ROCCAT Skeltr is the full-powered keyboard that unites peripherals and mobile devices, creating an unstoppable gaming force. Taking device integration to a new level, it consolidates control by bringing smartphones and tablets into the mix. Thanks to the Skeltr, swapping between devices has never been easier, meaning users will no longer need to pick up their mobile devices in order to control them while gaming. 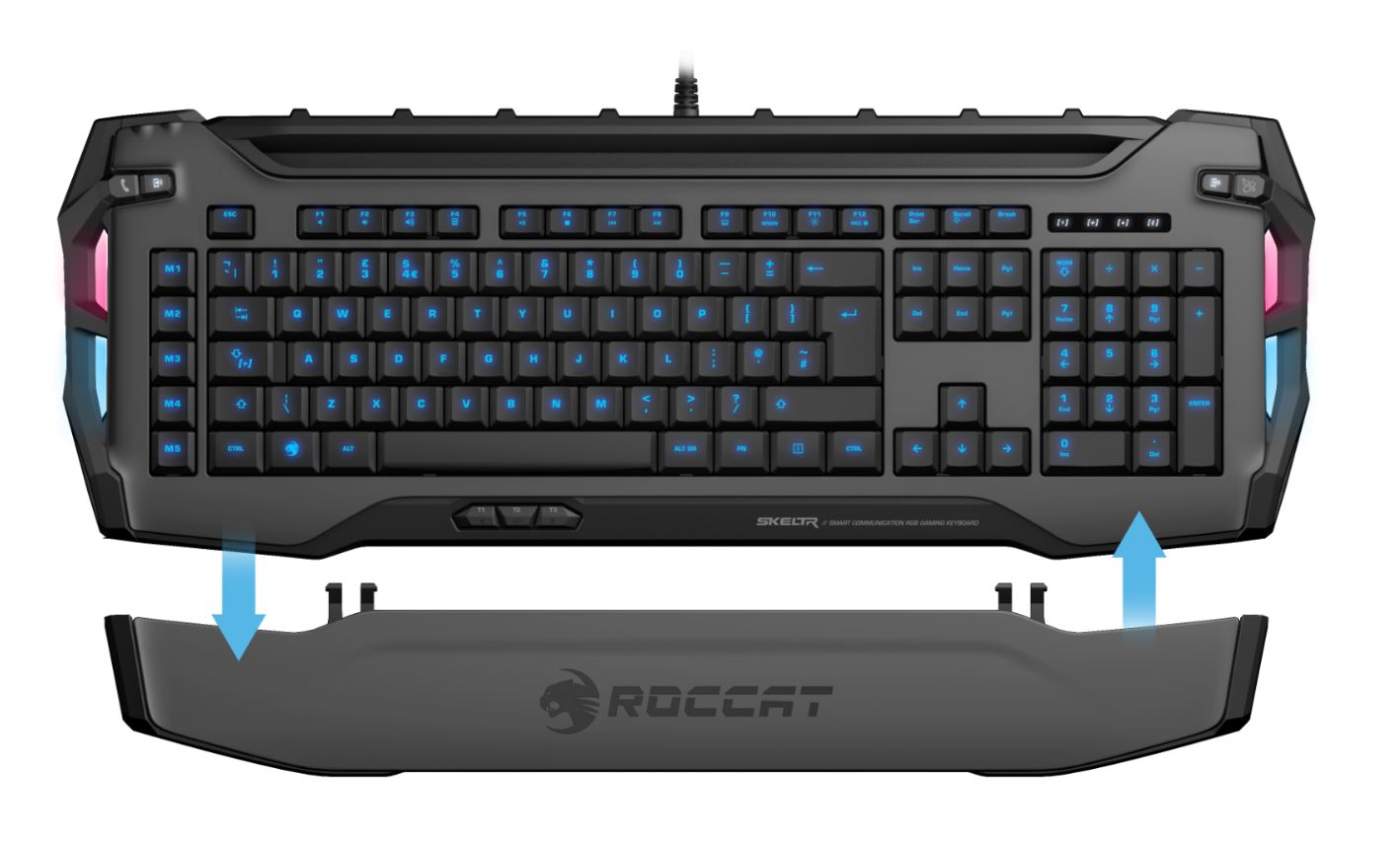 To securely hold mobile devices, ROCCAT devised a device docking slot discreetly positioned on the rear side of the keyboard. It works with virtually every mobile device on the market and doesn’t involve any clips or movable parts that break easily. The docking slot offers a high degree of flexibility, allowing for both vertical and horizontal device placement.

The type-to-device functionality provides Android- or iOS-device users with direct access to their phone or tablet via Bluetooth. The feature, toggled with a single key press, lets you switch between system and device typing, so you can reply rapidly to incoming messages on you mobile device. The Skeltr can also take calls through your phone via the headset you have connected to the keyboard. Switching between your system and device as an audio source provides a further level of integration.

The Skeltr is also the latest ROCCAT device to take full advantage of the ROCCAT Swarm software suite, with comprehensive device integration and configurable RGB illumination. Quick launching games, individualising lighting effects, checking GPU or CPU temperatures are some of the many examples of functionality made possible by our software.

René Korte, CEO and founder of ROCCAT says: “The ROCCAT Skeltr is the perfect keyboard for the modern gamer. The optimized membrane keys offer a level of typing precision that leaves nothing to be desired, with input mistakes becoming a thing of the past. Six easy to reach, individually programmable macro keys cater to core gamers who need that extra level of control during intense situations.” He goes on to explain: “In addition to ticking all the “must-have boxes” of a gaming keyboard, the Skeltr is the only future-ready product in its category. No other device offers mobile device integration like the Skeltr does.

Smartphones and tablets have become a part of our daily life and they are here to stay. The Skeltr fully integrates those devices into our gaming world and even augments the gaming experience.” Finally, he says: “But the Skeltr is not only for gamers. It is also an ideal companion in the office. It enables users to quickly switch between Skype calls on the computer and incoming voice calls on the smartphone. The type-to-device functionality offers the flexibility to reply quickly to text messages directly from your keyboard – you never have to pick up the smartphone anymore at all. The Skeltr gives you full control of your desktop and mobile communication, all at the tip of your fingers.”

Gamers can check out the Skeltr as well as other ROCCAT products including the Sova lapboard, Renga headset and superdextrous Kiro mouse at the Audion stand near the entrance of PAX. The products will be available to buy throughout the three days. 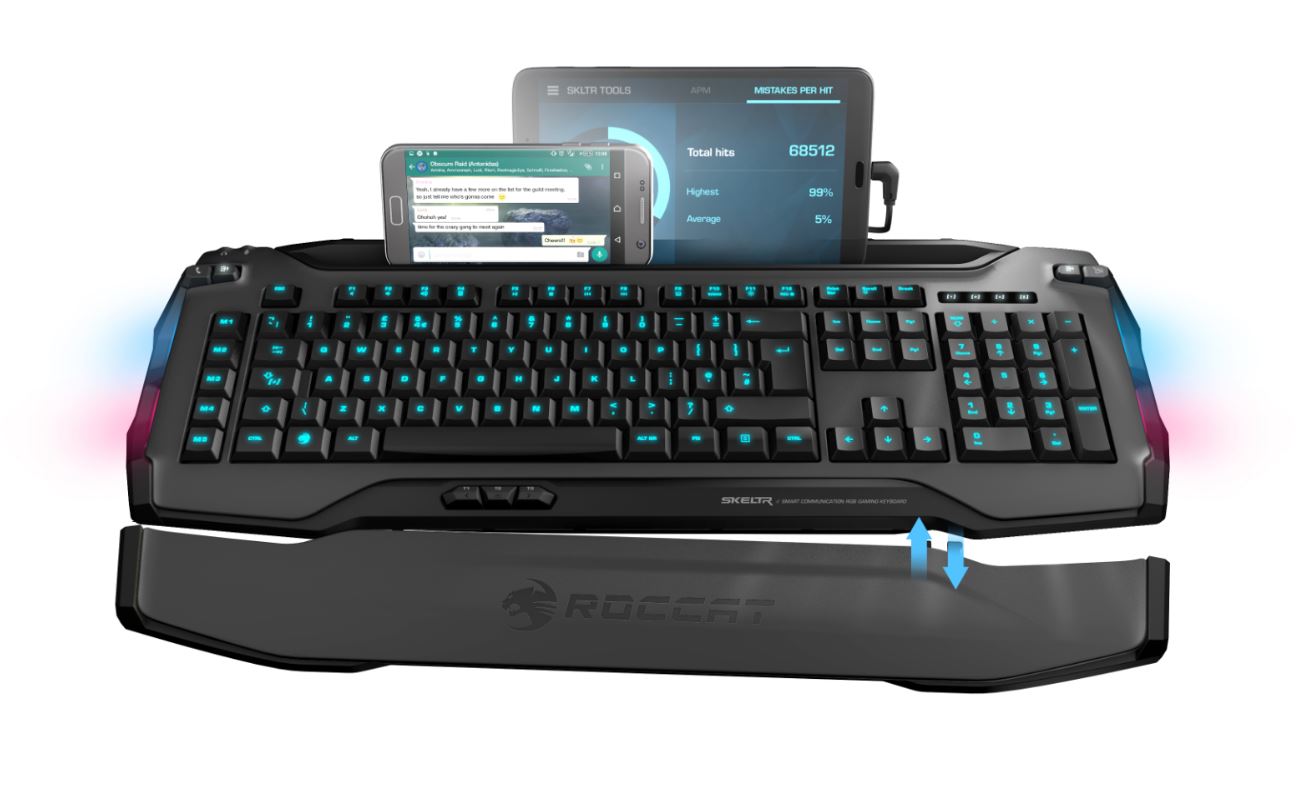