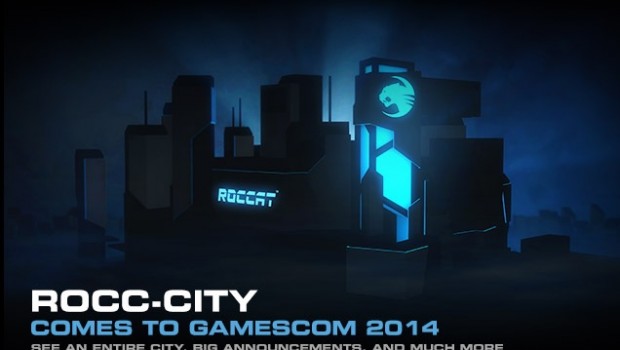 Hamburg/Taipei July 22, 2014 – Gamescom, one of the most highly anticipated gaming trade fairs in the world, and the largest held in Europe, once again hosts ROCCAT Studios August 13 – 17. This year, ROCCAT goes all out, bringing an entire gaming city to Hall 8, Booth A10 in what we’re proudly calling, ROCC-City, where one of the most exciting announcements in ROCCAT’s history will be shared with the public.

The biggest news coming out of ROCCAT during Gamescom is the reveal of two revolutionary products set to pave the way into the next phase of ROCCAT creations, with a philosophy like no other gaming peripheral company today; one, a completely new take on the gaming mouse, and a keyboard with full smartphone integration. “We call our upcoming products “Future Ready”, and that is exactly what they are,” explains René Korte. “Moving forward, we wanted to offer something that nobody has considered yet, and that’s peripherals that adapt to the future of gaming experiences, and the user’s gaming needs. These first two products have the full potential to remain a part of a gamer’s arsenal for many years, growing with their needs, adapting to personal tastes, and maintaining their relevance in an ever-changing gaming market. ”

On the mouse, René says, “We asked the questions, “What would it be like if you could do more than change a button assignment? What if you could physically change the button itself? What if you could make your own buttons from scratch?” We had to find out, and what we discovered upon creating this was a mouse that can be fully adjusted to any gaming genre fluidly.”

Smart – the integration of the phone

As for the keyboard, René goes on to say,” Smartphones do so much these days. They’re a second-screen experience for many gamers in a variety of ways, but we wanted to offer more than the next step in integrating smartphone and keyboard. We wanted to take the next ten steps. A keyboard designed not only to integrate your phone fully into the gaming realm, but one that takes the standard functionality of a phone, communication, and seamlessly weaves it into your

gaming experience. Taking calls, texting, everything. Why can’t you have it all? We plan on giving that to the world, and showing you what that looks like at Gamescom.”

These two Future Ready peripherals are the first phase in a design philosophy that ROCCAT has embraced as the way forward, and Gamescom will be the place where the world will get their first look at exactly what they are and what they can do.

A city for gamers

These announcements will be presented in ROCC-City, a unique and exciting gaming environment envisioned by René, who explains, “ROCC-City is designed to be a fully immersive gaming experience for long-time fans of ROCCAT, to gamers who have never heard of us. It is a wholly realized gaming space with themed sections designed to make you feel as if you are in different neighborhoods within our ROCC-City, all with something different and exciting to offer. We want you to get lost in our city, exploring our products, playing new games, and essentially getting a feel for what it means to be a part of the ROCCAT experience. We’re very pleased with Gamescom, and are excited that they have given us an opportunity to truly engage their attendees in an exciting and unique way.”

In addition to the news above, ROCC-City will host a series of entertaining events, as well as giving gamers a hands-on with some of ROCCAT’s newest products. Reference the list below for a full rundown of ROCCAT’s contribution to Gamescom 2014.