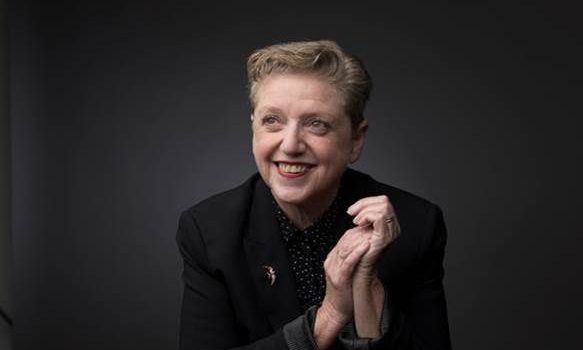 MELBOURNE, FOR IMMEDIATE RELEASE – Robyn Archer AO has dazzled the world with her virtuosity and interpretation of the cabaret repertoire with a career unparalleled in this country. In November, Robyn Archer returns to Melbourne with Que Reste T’il (translated as What Remains?), a passionate journey through the origins of cabaret through song, storytelling and a hint of satire for two performances only at Arts Centre Melbourne, Playhouse Theatre on November 10 and 11.

Que Reste T’il, Charles Trenet’s beautiful chanson is the title of this superb cabaret tour de force by Robyn Archer.  Accompanied by Michael Morley (piano) and George Butrumlis (accordion), Archer takes the audience on a highly emotional and satirical journey through a century of French song, from rarely performed material from Paris in the 1880s, through each decade to the 1970s.  With wonderful musicianship from this trio, Que Reste T’il is moving, uplifting, captivating, and very very funny.

Harking back to the intimate Parisian nightclubs and smoke-filled cafes of the 1880s, Archer will return to the origins of cabaret, capturing the mood and events of those eras and performing rare works by Aristide Bruant, Edith Piaf, Charles Trenet and Jacques Brel. Songs will be performed both in French and in English.

Robyn Archer AO is often referred to as a national treasure. An artist of the highest caliber, she is known to many for her one woman shows in the 1970s and 1980s, by others for her original songs and recordings, and now by thousands more for her memorable arts festivals in Canberra, Melbourne, Adelaide and Tasmania. Archer has recorded 12 albums and her writing includes essays, songs, works for the theatre and children’s books. She is an ABR Laureate, an Honorary Fellow of the Australian Academy for the Humanities, an Officer of the Order of Australia, Chevalier de l’Ordre des Arts et des Lettres (France) and Officer of the Crown (Belgium) and also holds honorary doctorates from Flinders University (South Australia), Griffith University (Queensland), and the Universities of Sydney, Canberra and Adelaide. Archer now combines artistic direction with concert performances, strategic advice, mentoring younger artists and artistic directors and speaking and writing about the arts across Australia and the world.

Michael Morley (piano, vocals) is currently Emeritus Professor of Drama at Flinders University. He has written widely on European and German theatre, concentrating particularly on the life and work of Bertolt Brecht and has served as President of the International Brecht Society. Michael has written about music, theatre and literary criticism for a variety of Australian and international publications, and has translated poetry by pianist Alfred Brendel, most recently for the English version of Brendel’s A Pianist’s A to Z. He has been pianist and musical director on a number of professional productions in Australia and overseas, including The Threepenny Opera (State Theatre of South Australia and Queensland Theatre), The Mother (Troupe Theatre), Happy Birthday Brecht (University of California at Davis and Artaud Theatre, San Francisco) and Jacques Bell is Alive and Well and Living in Paris (Street Theatre Canberra.) Since 2004 he has presented the show Sing Your Own Musicals in Melbourne, at Adelaide Cabaret Festival and, most recently, at Port Fairy Music Festival. In 2012 Michael was awarded the South Australian Premier’s Award for Lifetime Achievement in the Arts.

George Butrumlis (accordion, vocals) has played the piano accordion since the age of six. His career includes performances with Jeannie Lewis, Kristina Olsen, Ross Hannaford, Melbourne Symphony Orchestra, the Three Tenors and Pavarotti’s last tour of Australia. George has played on countless Australian movie soundtracks including Red Dog, The Sound of One Hand Clapping, Lillian’s Story and most recently the film about the life of Mirka Mora, Monsieur Mayonnaise. George is probably most well-known for his band Zydeco Jump, which featured on the bill of many Australian music festivals for over twenty years and as a founding member of Joe Camilleri’s Black Sorrows. George has served a three-year term on the music board of the Australia Council for the Arts, and has recently become director of the Melbourne Accordion Orchestra. He describes working with Archer and Morley for the past eight years or so as a great privilege and one of the greatest musical experiences of his life.

Robyn Archer AO has never shone brighter than in Que Reste T’il, receiving the 2013 Helpmann Award for ‘Best Cabaret Performer’, named Cabaret Icon at the 2016 Adelaide Cabaret Festival and performing a two week sold out season at Sydney’s Griffin Theatre in July of this year.

Archer says of the project, “We have so much joy in performing these songs – the passion, the raucous fun, the biting satire that still rings so true today. It’s a great ride, and while there’s l’amour aplenty, this presents a Paris very different from the romantic cliché.”

This is a unique and rare opportunity for Melbourne audiences to experience one of our most talented and gifted artists reimagine the French repertoire and ask, ‘What Remains?’. Do not miss Robyn Archer on stage – and on song.

“There is no better way of revisiting the history of French song… her voice flexed effortlessly from gutsy growls to hilarious caricature to plaintive yearning…a true cabaret performer.”  The Advertiser