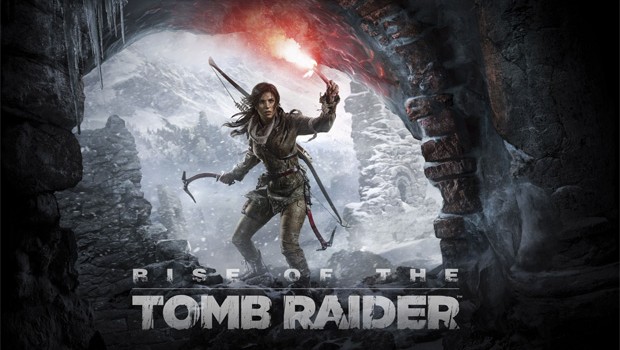 Summary: Rise of the Tomb Raider on PC is not only stunning a but a true interactive experience!

I’m sure you’ve noticed it by now – PCs are just better. At everything. And especially games. So like any other proud member of the PC Master Race, when I heard Rise of the Tomb Raider would be released on Xbox One in 2015, I immediately thought, “Who cares?! I’ll wait for the superior PC version to be released in 2016!” And I was right. 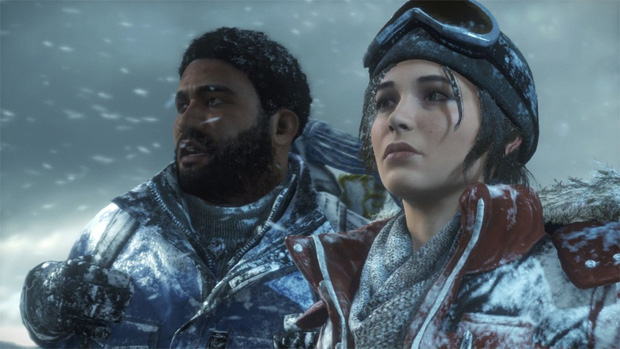 Crystal Dynamics/Square Enix have put together a marvellous and graphically astounding sequel to their already fantastic reboot of Tomb Raider from 2013. And only on a PC do they have the tools to polish this gem of a game up until it’s almost blinding. Indeed, in Rise of the Tomb Raider, you won’t know when to pick up the controller and when to put it down – the graphics are so sharp, crisp and detailed the gameplay truly looks like one giant CG movie.

The plot is set one year after the 2013 Tomb Raider game, with a restless Lara Croft still bugging over all that supernatural goofiness with the Yamatai (a mystical, lost Japanese civilisation) that went down in game one. Especially frustrating because the nefarious think-tank/secret society/global bad-guy organisation known as Trinity went out of their way to cover up and debunk all said goofiness. But why? What is their EVIL agenda?! Dammit, Lara must know! Wanting to get to the bottom of it all, she turns to her late father’s research into the lost city of Kitezh and the promise of immortality. 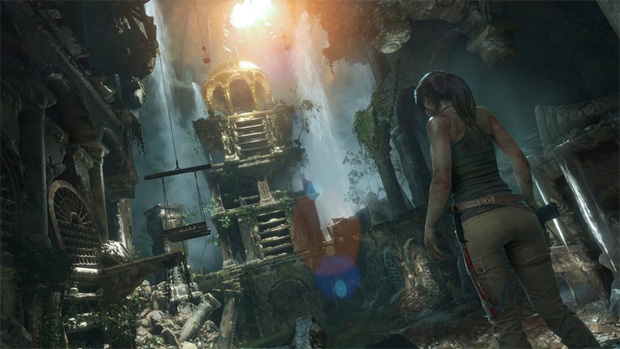 Lara organises an expedition to Siberia hoping to uncover the tomb of the Prophet of Constantinople, a key figure in the legend of Kitezh. Far more confident than she was in game one, Lara has come into her own now as the Tomb Raider we all know and love –  pistol-totting, animal shooting, murdering with abandon, and a veritable well-spring of information on all things archaeological. She’s Indiana Jones, Hermione Granger, and Bear Grylls all rolled into one (and with great hair).

Each level in RotTR is a mini-open world adventure hub where Lara makes her way about discovering secrets, navigating tricky environments and doing away with every living thing that isn’t her. On top of this main narrative quest is also the return of tomb raiding itself. Yes, tombs are back, and they’re bigger and better than ever. Hidden in each level are these puzzle-tombs just like the old days, where Lara will explore huge ancient spaces littered with deadly traps, solve dramatic environmental puzzles, and decipher ancient texts to reveal crypts of useful loot (in the form of an extra perk or item). 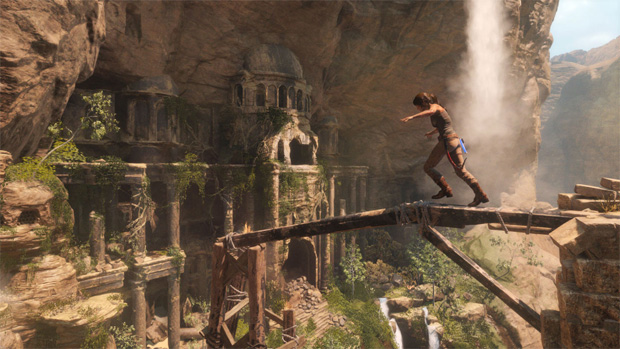 The most immediately striking aspect of RotTR are the environments themselves. On full detail, the PC pushes well past what next-gen consoles are capable of to produce some truly gobsmacking vistas and play-realms. You will find yourself pausing to simply take in how beautiful a job the developers have done. The lighting, the shadows, the flutter of the leaves, the ripples of the water and the shifting of the snow, indeed, these are the richest in-game graphics I’ve ever seen. Lara does battle with this play-world itself, and not simply just the enemies within it.

She now hunts and crafts Far Cry style, creating all sorts of devious tools and weapons to exploit. The John Rambo adventures continue in the combat system as well – you’ll use the environment to your advantage, climbing trees and diving underwater to avoid or ambush enemies. Nothing made me feel more empowered as a woman that burying my climbing axe into hundreds of male heads, or shooting men from cover. Take that patriarchy! You’re free to configure Lara’s gear, weapons, and ammo to suit your play style from stealth style to going in guns blazing. There’s also plenty of opportunities to craft bombs, grenades and incendiaries for creating all kinds of havoc around the campfires of your enemies. 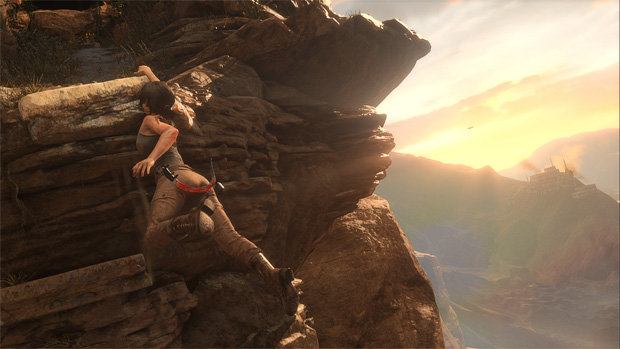 The gameplay itself is rewarding and fun. The combat is intuitive without being too easy or hard, and Lara’s gymnastic abilities are still as spectacular as ever. I was particularly pleased Lara’s dexterity doesn’t necessarily mean you’re immune to screwing up. Mistime a jump or grab at the wrong ledge and you’re history. With games like Assassin’s Creed overpowering their heroes more and more with each release, it’s refreshing to see Lara Croft is just skilled, and not some infallible super-hero.

For gamers who think too much Lara is never enough, there’s a healthy amount of DLC available. A season pass adds additional tombs, and an Endurance mode which ups the game’s difficulty to insane levels. In Endurance, Lara also has to search for food and fuel for survival against the elements. The season pass also comes with a new downloadable content called Baba Yaga: Temple of the Witch, which adds new tombs, puzzles and a new campaign featuring Baba Yaga to the base game. 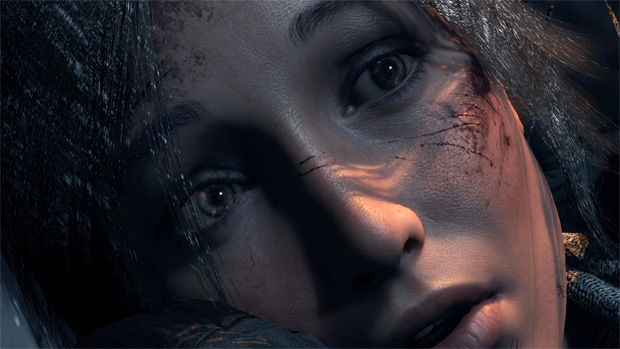 I assume this will feature the infamous witch and hopefully her evil witch cottage with big chicken legs (fingers crossed). There’s also Cold Darkness Awakened which seems the usual fair of fighting off endless waves of increasing tough enemies (something I frankly get bored of quickly even when it comes free with the main game). In addition, RotTR also features the now-expected stream of DLC outfits and weapons to keep you customizing and expanding (if that’s what you’re into). 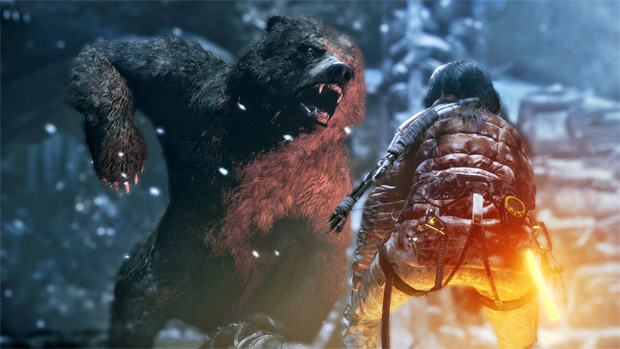 So, as an eternally smug PC owner, I’m proud to say nabbing Rise of the Tomb Raider on PC is clearly the best course of action. It’s everything the old Tomb Raider games were and now so much richer, more detailed, more involved, more dramatic, and just way more fun. It’s also just as enjoyable to watch being played as it is to play itself – a true interactive movie. 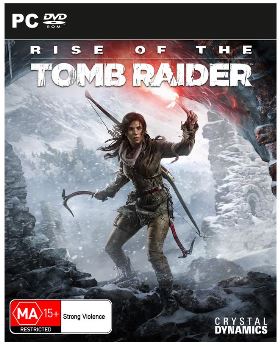