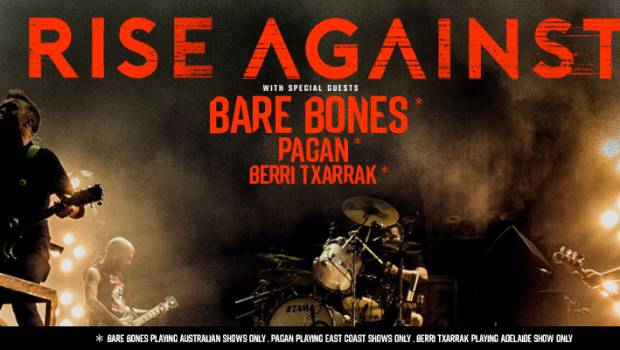 Frontier Touring is pleased to announce special guests Bare Bones will be joining Rise Against at all shows throughout Australia. Rolling Stone championed the band’s 2017 debut album Bad Habits as a “hit record of the genre”, while Killyourstereo included it in their Top 20 albums of the year. The Sydney five-piece have held their own on stage alongside acts such as Every Time I Die, Northlane, Black Label Society, Cancer Bats and more, while they also opened the main stage at Sydney’s 2015 Soundwave alongside Slipknot and Marilyn Manson. Check out Bare Bones’ single ‘Thick As Thieves’ here.

Also joining Rise on Australia’s east coast dates (Bris, Melb, Syd) are Melbourne punkers Pagan. Pure power and vicious swagger, Pagan have spent an exuberant two-year existence building a cult attraction to their wild, ritualistic performances and bittersweet death rock and roll. In 2017, the four-piece won triple j Unearthed’s UNIFY Gathering competition, following it up with a spring tour alongside Clowns, and a slot on stage at Wollongong’s Yours and Owls festival. Pagan are currently in the studio, working on their debut album. Listen to triple j single ‘Luigi Cherubini’ here.

Joining Rise in Adelaide is Basque rock band Berri Txarrak. Having dominated the realm through constant international touring and a vast discography including a documentary film, the band continue to play shows across the world. Their album Infrasoinuak was released late last year and features recent singles ‘Infrasoinuak’ and ‘Spoiler!’ which you can listen to here and here.

In addition to these three new bands, Frontier Touring would also like to advise that previously announced support act SWMRS will unfortunately no longer be touring Australia next month.

With their truly huge singles and radio hits – think ‘The Violence’, ‘I Don’t Want To Be Here Anymore’, ‘Help Is on the Way’, ‘House On Fire’ and more – there’s no mistaking it: Rise Against are arguably the best and most unforgettable punk band on the planet! Don’t miss these epic, visceral shows. Tickets on sale now.