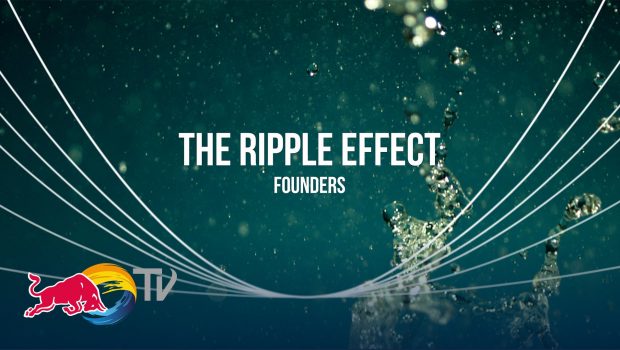 On December 12, Red Bull TV will premeire the second season of The Ripple Effect – a brand new six-part TV series, exclusive to Red Bull TV. Picking up where the first season left off, the latest instalment of The Ripple Effect is packed with never-before-seen interviews with the individuals who have changed the face of technology, media and youth culture through their pioneering spirit, unique style and disruptive business models.

With unprecedented access to some of the biggest names in art, technology, music, business and publishing, each thirty-minute episode of The Ripple Effect tells the story of the world’s most innovative, inspirational and ground-breaking entrepreneurs and the brands they have created – charting their path from early inspiration through pivotal points of their journey and on to global success.

The series is directed by UK-based, South African director Peter Hamblin.  Peter – who directed the much lauded surf film, Let’s Be Frank, also for Red Bull TV – is a creative talent who brings his unique visual style to the series. With humour and Peter’s signature interplay of images and words, each of the subjects’ stories come to life in a way which is both engaging and highly entertaining.

“What we hope to do is tell entertaining stories of these maverick entrepreneurs and business innovators that might inspire viewers to follow their own dreams,“ commented Red Bull TV Executive Producer, Gus Roxburgh.  “In a sense it is a business show, but it’s also fun and quirky – we like to call it ‘Bloomberg for Millennials‘.”

The people behind the businesses and brands featured in the second season of The Ripple Effect share one thing in common – each have forever altered the landscape of their chosen fields of industry. With their revolutionary business models, products and ideas, they have successfully second-guessed the zeitgeist and answered the burning question: What’s next?

Faced with the uninspiring prospect of working a nine to five, Wired co-founders Jane Metcalfe and Louis Rossetto had a plan – to change the way we viewed technology by making the people behind the major tech advancements the stars of the show. It worked. Today Wired has a multi-million dollar valuation, a circulation of over 900,000 and several international editions.

From the brilliant mind of counter-culture king and pioneer of the Lowbrow art movement, Robert Williams, Juxtapoz magazine has single-handedly redefined the boundaries of art. In uniting the art world’s creative underbelly, Juxtapoz went from being a punk publication to a leading light – taking its place as the bestselling art magazine on the market.

Bob Moog set up his first business – building custom Theremins in his father’s garage – to pay his way through his degree. What the world didn’t know at the time was that the man behind that business would go on to change the soundtrack of modern music forever, inspiring generations of artists – from The Beatles, Emerson, Lake and Palmer and Gary Numan to Nine Inch Nails, Kanye West and Kendrick Lamar.

Twitch.tv shines brightly as the perfect example of the power of a well-timed pivot. Co-founder Justin Kan successfully took his brainwave of a one-man 24/7 reality TV show and turned it into a platform which would go on to spearhead the fastest growing sport on the planet and see Twitch take its place as a unicorn – with a $1 billion valuation.

Few names are as synonymous with the world of gaming as Atari. Founder Nolan Bushnell mobilised a fresh new generation of gamers, bringing computer games first to bars and amusement parks and then into our homes. Atari – and their era-defining game Pong – made waves far beyond the games industry, forever altering the face of consumer electronics and popular culture.

Episode 6: Reddit
The brainchild of college roommates, Steve Huffman and Alexis Ohanian, Reddit has proudly proclaimed itself ‘the front page of the internet’ since 2005. In the little over a decade since, the site has set new benchmarks for freedom of speech and changed the way we consume and interact with news forever.

The Ripple Effect will premiere exclusively on Red Bull TV from December 12 on: redbull.tv/therippleeffect