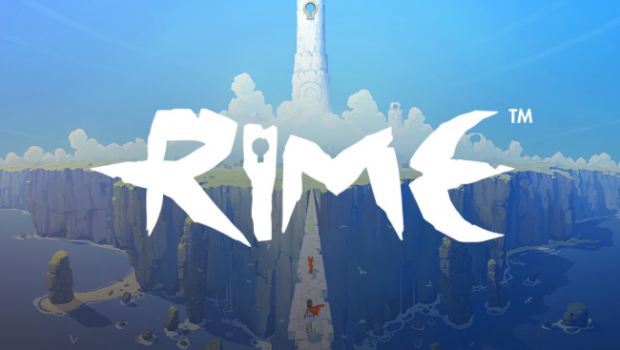 Summary: Rime is a fun, relaxing adventure with an incredible soundtrack - but the Nintendo Switch version has a slew of technical issues that ruin the experience.

In the last few months, the Nintendo Switch release schedule has been filled with ports and rereleases of Indie games that already exist on other platforms. The majority of these games have been ported fairly well – sure there were some issues here and there, but for the most part there’s been little cause for concern when a new Switch port of an indie game is announced. Unfortunately, the Rime port for the Nintendo Switch may signal the end of this optimistic outlook. 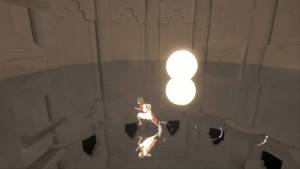 Rime is a 3D adventure platformer with a strong focus on climbing and linear exploration. The game begins with your character washing up on the shores of a mysterious island, with a gigantic white tower looming in the background. You’ll soon meet a spirit fox that guides you around the island and into other environments. There’s a vague story being told through flashbacks and visions, and it isn’t until the final five minutes of the game that the ambiguity is lifted to reveal a remarkably touching narrative. 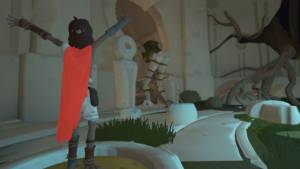 After only an hour with the game, you start to draw strong gameplay comparisons with 2001’s Ico, as most of your time is spent climbing towers, activating switches and generally moving from one point of interest to the next. Along the way you’ll encounter a few memorable puzzles involving perspective and shadows, but for the most part puzzles mainly involve pushing blocks and searching for keys in order to progress. 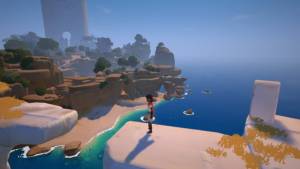 In fact, there’s very little challenge to Rime at all. Accidentally leaping to your death results in your character being neatly placed back to where they were in a matter of seconds, and most of the puzzles can be fumbled through without much resistance. Some may see this lack of challenge as a negative, however I think it results in a fantastic, relaxing six or so hour experience. I really enjoyed cruising through the game without any frustration (apart from the final area), simply exploring at my own pace and it allowed me to really soak in the game’s incredible soundtrack and gorgeous visual design (with some major caveats, more on this in a moment).

A fully orchestrated soundtrack underpins every moment in Rime, to tremendous effect. Whether it’s creating tension in a moment of frenetic action or swelling to a crescendo of emotion during some of the game’s more heartfelt moments, the music is absolutely incredible and the Rime OST ranks up there as one of my all time favourites. 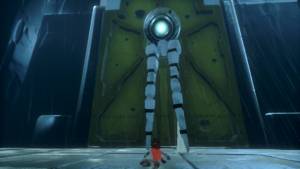 Unfortunately, many of these powerful moments are completely drained of their impact due to a slew of graphical and technical issues that plague Rime at almost every step of the way. Playing both docked and undocked, framerates sporadically jump from what seems to be beyond 60fps down to the single digits for significant stretches of time, depending on how much of the world the game is being forced to render. This is particularly prevalent in the first area of the game, which makes for a terrible first impression. 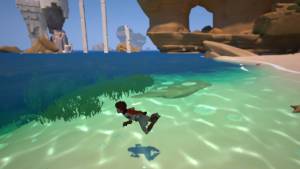 Even more concerning is Rime’s performance when playing in portable mode. When playing on the Switch undocked, Rime runs at a severely compromised resolution, making the game look extremely blurry and jagged – so much so that I felt like I was developing a headache when I first started playing. The two screenshots below compare the game in docked and undocked mode, and the difference is striking. Developer Tequilaworks noted that the portable version of the game needed to be compromised technically in order for the game to even run on the Switch, yet the end result is so poor compared to other versions of the game that it feels like the developers have done a real disservice to their own work. 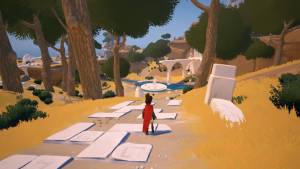 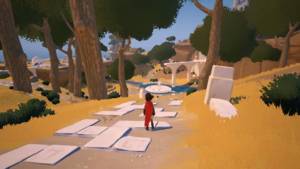 These graphical issues are profoundly disappointing because I think Rime is a great game, but the Switch version is a technical mess with no signs of future improvement. The gameplay is fun and relaxing, the soundtrack is phenomenal and when it’s running on anything other than the Switch – the visual design is gorgeous. You could play Rime on the Switch, but I strongly recommend getting it on a different platform to save yourself the headache.