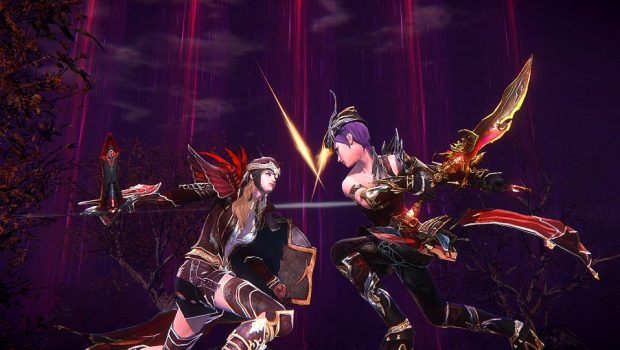 Enter dedicated Player vs. Player Combat Zone to find new quests,
events and mounts to ride into battle by land and air
In the second massive update Riders of Icarus has received in as many months, large-scale PvP battlegrounds where players can take place in all-out mount warfare by land and air have been introduced to the action-adventure MMORPG. The plethora of new content, debuting today, provides a vast new area for Riders to explore on their quest to vanquish foes and capture unique mounts. The update includes:

The Exarahn Badlands: A chaotic region, steeped in darkness and lawlessness since the recent fall of the Exarahn Kingdom, players enter the Badlands through a portal that transports them back 1,000 years to a region that will one day become the Hakanas Empire. Despite its dismal appearance, Exarahn still thrives with quests and monsters for players to conquer and fearsome mounts for players to tame.

Challenging New Mounts: The mounts of the Exarahn Badlands have survived and thrived in a world of darkness, and are not easily bested. Many new ground and flying mounts will be available to tame, but some may require the cooperation of allies in order to add them to your collection. Players should keep an eye out for Nightmare and Profane Apocalypse, two elusive mounts which only spawn at random locations within the Badlands.

Guild Alliance Wars: Guilds of rank 3 or higher can now form Alliances with other guilds and declare war on other Alliances. Players from each Alliance can duel to the death on the ground and in the sky to gain glory and a special Alliance buff should they emerge victorious.

Manastone Battles: Weekly “capture-the- flag” challenges will require players to work with their Alliances to successfully deliver the Manastone and demolish any opponents who attempt to claim the stone for their own. The victorious Alliance will receive special rewards including the Alliance Stingray, a unique flying mount capable of carrying up to 10 Riders at a time.

Militia: Players who are not members of a guild, or whose guild rank is less than 3 can still take part in the bloodshed by joining the militia. The militia allows players to participate in PvP and provides a modicum of protection from other players roaming the Badlands.

Adding to the already vast world of Riders of Icarus, the Exarahn Badlands will provide players with ample opportunity for exploration and adventuring with the promise of more to come in future updates.

To download Riders of Icarus and breach the shadowy realms of Exarahn, and to stay up-to-date on the latest news and announcements, join the community today:ridersoficarus.com