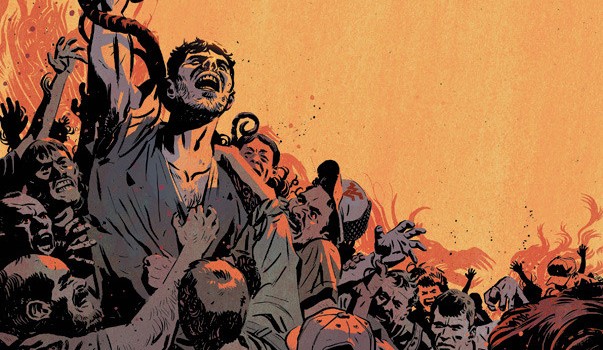 The Walking Dead creator Robert Kirkman takes another stab at the horror genre with his new series Outcast. However, whilst The Walking Dead involved shuffling corpses as its main threat and antagonists that threaten the main characters he takes a completely different approach. Gone are the zombies, as much as I love those undead putrid rotting cannibals they are nowhere to be found in this story. Which is a plus, Kirkman is not repeating himself even though zombies are part of the horror genre. Instead, Outcast deals with demons. The type that possess you a la The Exorcist and personal demons. 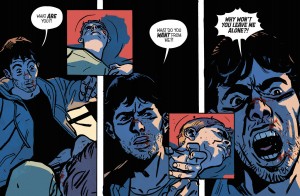 Yet to say Outcast is strictly about demonic possession would be like saying Saving Private Ryan is just about a group of soldiers having to save a guy called Ryan. Outcast is actually about the protagonist Kyle and his personal demons that have been affecting his life and rendered him a lonely sad sack of a person shunned by his own brother in law. Azaceta also should take credit for bestowing his art upon Kirkman’s story which helps to create some of the most memorable images in the first issue, revealing them would ruin the shock of actually seeing them for yourself. Especially when the first major shock is meticulously planned and drawn it hits the reader like a shotgun blast to the face, and just as gory too. Another plus about Azaceta artwork is how grounded in reality it is, none of the character’s detailing or positioning looks unrealistic and the use of colouring and positioning of characters completely enhance the mood of each scene whether it is Kyle being pestered by his brother in law or during an exorcism.

The story may deal with demons, personally and literally yet remains focused on developing Kyle and finding out just why his life has been run into the ground. While the first issue offers hints as to what has ruined his life it will obviously only become clearer as the story develops with the next issue. Until then the first issue of Outcast is a great and strong introduction to Kyle and the world he inhabits and will allow Azaceta and Kirkman to develop what looks like a series that can rival or even top The Walking Dead in terms of quality and popularity. Whether Outcast can do this only time will tell.