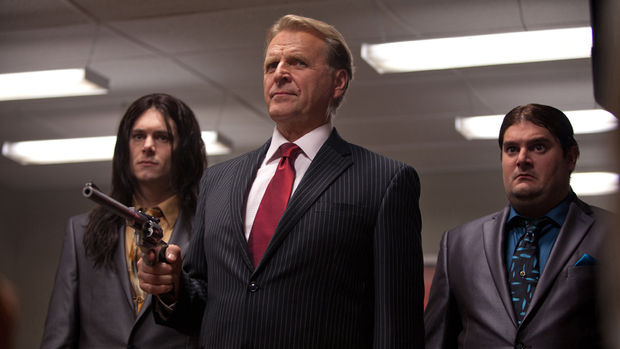 Revenge For Jolly, available to own on DVD from November 7, 2013.

Universal Sony Pictures Home Entertainment is releasing Revenge For Jolly, available to own on DVD from November 7, 2013.

Join Harry in the ultimate tale of revenge as he sets out on a destructive journey to avenge the death of his beloved dog, Jolly. Packed full of punch and slapstick, Revenge for Jolly features star cameos from a number of Hollywood heavyweights, including Academy Award® nominee Kristen Wiig, Elijah Wood, Ryan Phillippe and Adam Brody; and is available on DVD from November 7, 2013.

When Harry (Brian Pestos) returns home to find the lifeless body of his cherished dog Jolly, who has been killed under confusing and suspicious circumstances, Harry enlists the help of his cousin Cecil (Oliver Isaac) to find Jolly’s murderer.

Following a series of clues, Harry and Cecil trek across the country in a rampage for retribution. As the piles of bodies begin to grow, the hunt goes into high gear and the killers name is revealed.