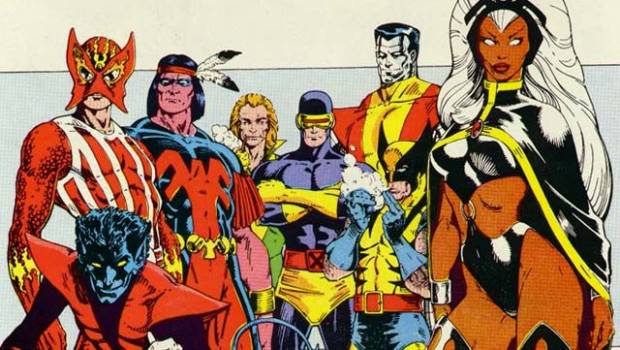 Summary: The idea of the what the X-men are today is born. Claremont is very dialogue heavy, but this serves these particular people well.

The legend is reborn.

WARNING: I am aware that some of these comics have been changed in this new series to reflect the then at the time new continuity and retcons. I will NOT be explaining the differences between the original issue and the Classic X-men issue. That is just way too hard and although we are all under house arrest, I don’t have that kind of time.)

The Story: A new team is brought together that defined an era.

Background: Len Wein (and technically Chris Claremont) revives the X-men and sticks around for 17 years. Eat your heart out Dan Slott.

Summary: Scott Summers bursts into the Mansion and his eyes are open! His powers aren’t working and Professor Xavier scans his mind and sees that the X-men (which also included Polaris and Havok) landed on a desert island and were taken completely off guard. Scott is hit and barely makes it back to the Blackbird and back to the mansion.  Scott’s powers return and Xavier has to blindfold him for the time being. Realizing that the time has come, Xavier engages Cerebro and locates a new team of mutants. Meanwhile Scott runs training sessions in the Danger Room to get back into shape.

Xavier first travels to Winzeldorf, Germany, a small town that looks like its straight out of Frankenstein. Which is just as well as we see a mob full of angry villagers chasing around what seems to be a demon. This is no demon though. He is a mutant named Kurt Wagner and after Xavier mentally freezes the crowd, he offers him refuge and a purpose.

Xavier in succession goes to Canada and recruits Wolverine, Ireland (Banshee), Africa (Ororo Munroe), Japan (Sunfire), The Soviet Union (Peter Rasputin), and Arizona (John Proudstar). After they arrive at the mansion, the don their new uniforms and are shown telepathically what happened to Cyclops team. The team goes to the island, which turns out to be alive and named Krakoa. They defeat the island in a single page and return home.

Polaris and Havok decide to leave and go back to school, while Scott and Jean talk about possibly leaving the academy. Banshee (who we find out is named Sean Cassidy), Kurt, and Peter bond over a piano when Bobby enters. To say that Bobby is upset about possibly being upstaged by the new team is an understatement. He pretty much tells them to get lost and leaves. Even Proudstar (who to this point has just been angry as all get out) tries to be friends with him and he gets rebuffed.

Outside, Wolverine hits on Jean as Ororo and Angel bond over being able to fly. As soon as Angel sees Wolverine being a creeper, he throws him across the grounds into a tree. The issue ends with jean telling the Professor that the team is going to leave.

This is where it all started. Well, not really, but for all intents and purposes the X-men we are reading today in 2020 started in 1975. Len Wein wrote this one issue and then Chris Claremont took over the Uncanny X-men and changed comics forever. The team became a multi-cultured, multi-layered one, and became recognizable for years to come.

First, we have Kurt Wagner, otherwise known as Nightcrawler. Nightcrawler is my favorite X-men and has been for as long as I can remember. He has the visage of a demon and the heart of an angel. His main mutant power is teleportation, which is awesome. He’s also agile and can stick to walls. His character is the only one of the new team that cannot pass in public without some type of disguise.

Then there is everybody’s favorite mutant Wolverine. Now this will be a very controversial statement, but I really am not a big Wolverine fan. I don’t dislike him but I’ve never really understood the hullaballoo about him. He’s got claws made of adamantium and a mutant healing factor… sort of. At this point his healing factor has gone unmentioned, so for all we know he’s just got claws. He can also talk to big cats (this shows up for like 2 issues coming up and then is never really used again.)

Colossus is the teenager of the group. He loves his family and really just enjoys being a member of the team. He can transform into a solid steel version of himself that is really strong and super durable. Then there’s Sunfire, who stays on the team for, well, this issue. He will pop up again in the future however. He can generate atomic fire from his hands and fly. We’ve got Sean Cassidy, AKA Banshee. He’s Irish, used to be a villain, and has a sonic scream that also can be used to help him fly.

This issue marks the debut of Storm. She can control weather and when found by Xavier, she is viewed as a goddess by the local population. She later goes on to lead the X-men on numerous occasions and has become almost as synonymous with the franchise as Wolverine and Cyclops.

Finally, there is the Native American John Proudstar (Thudnerbird). He’s angry, has something to prove, and … SPOILER alert, dies 3 issues later trying to take down Count Nefaria. He has a much cooler younger brother though (who shows up 9 years after this issue was released.)

As of now, the members of the team are really just known for their powers and one- or two-character traits, but as the book progresses, Claremont fully fleshes them out. This is just the beginning of a 17 journey with Claremont and the team. Except for the ridiculous way the the battle with Krakoa is handled, this is a phenomenal issue.