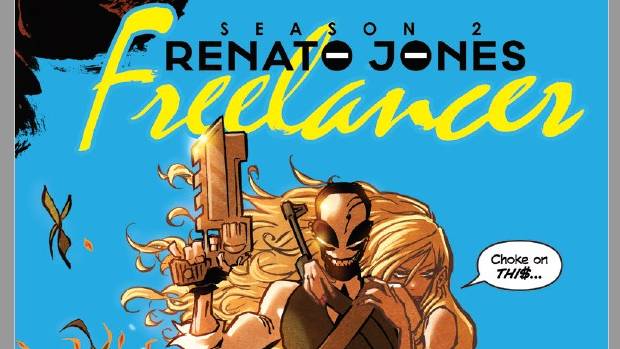 Summary: Between this and the last Renato Jones, the world changed. Renato has changed to match that world.

When I first explored the pages of Renato Jones I got a kick out of the overall vibe of the character and the story. Renato is kind of like Bruce Wayne… if Bruce was instructed by a ruthless idealist and had no issue with lethal force, in fact preferring lethal force. The old struggle between rich and poor and the rich treading over and on the poor at every chance they got only to finally be served their karmic payback is an appealing theme. But as Kaare himself writes, the world has changed and the over the top story of season one has become mild compared to the reality many people find themselves in now, as a result he turned that insane dial up to 11 (and beyond) and let the crazy fly to deliver this wild intense seemingly only fractionally removed from reality continuation of the life of Renato Jones, careful you don’t choke on it. 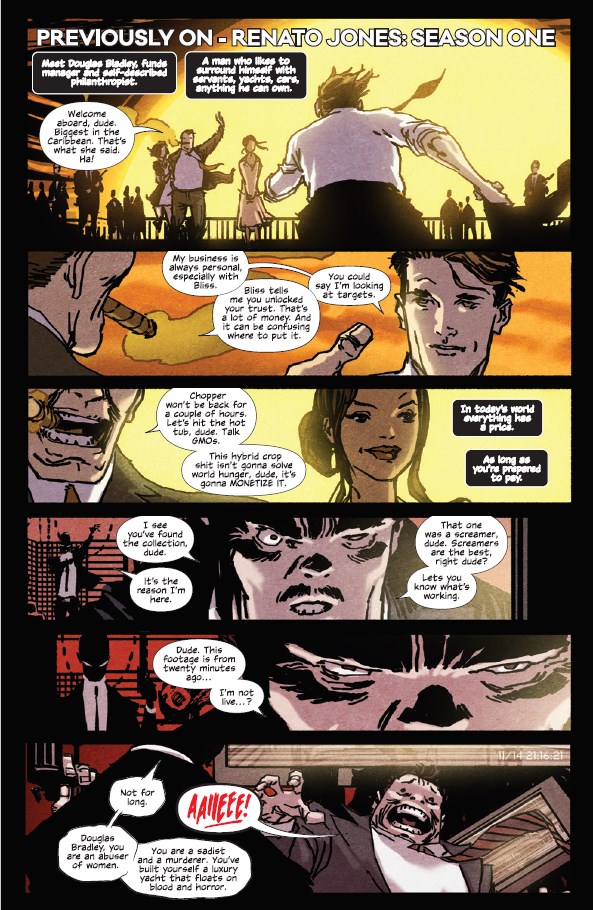 Reading the artists own words on how Season 2 came to be it’s clear to see and appreciate just how cathartic this was. I personally have a habit of watching the “comedy news” shows for their presentation of current events served with a few laughs as it makes it a bit easier to deal with. For Kaare though, he has a fictional character who he can vent that frustration through. In this particular season we get to see the impact the massive task set before Renato has on him. Fighting a metaphorical hydra of wealthy villains and their heirs, is an end ever going to be in sight or is his life set before him as a perpetual war against the One%? 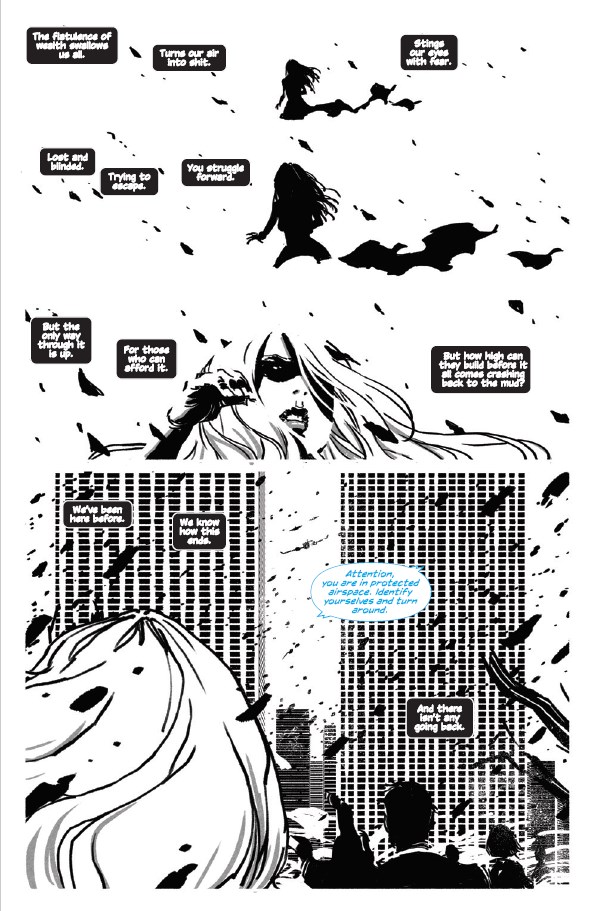 Kaare’s artwork really makes this comic stand out… the image styles alone vary from the more traditional coloured detailed panels to panels that play with the negative space in a way that will resonate with fans of Frank Miller’s work. But then just to change things around a bit more, we have photography for perfume ads… ads that look real but when you look more closely you see that familiar figure on the bottle. These photographic breaks remind me a little of the old Liquid Television by MTV, a show in which styles were put together to create a melting pot of curiousities. The whole package though just bubbles over with adrenaline and rebellion and tickles the fancy of this political snowflake. 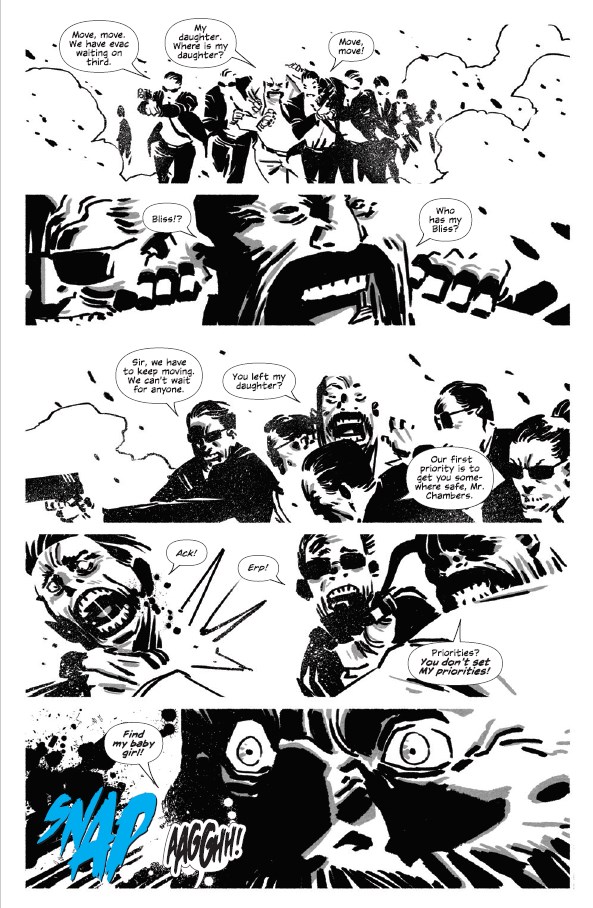 This is right up my alley. I love Batman, I love stories of empathy devoid evil doers being brought to justice. Renato Jones is Batman with an explosive lethal arsenal. With our real world politics and political figures seeming more and more like characters out of over the top stories… it’s hard for fiction writers to match the insanity… let alone put it together in package that can bring a degree of comfort in troubling times. Kaare Kyle Andrews has put enough current politics in this comic in a way that would enable the most die hard support of a dominant regime to still get kicks out of seeing how things go down. For those of us who perhaps have a bit more of a lean to one side… this is the aggressive catharsis for when the comedy shows aren’t quite cutting it. Let us just hope that reality doesn’t end up trying to one up Renato Jones again. 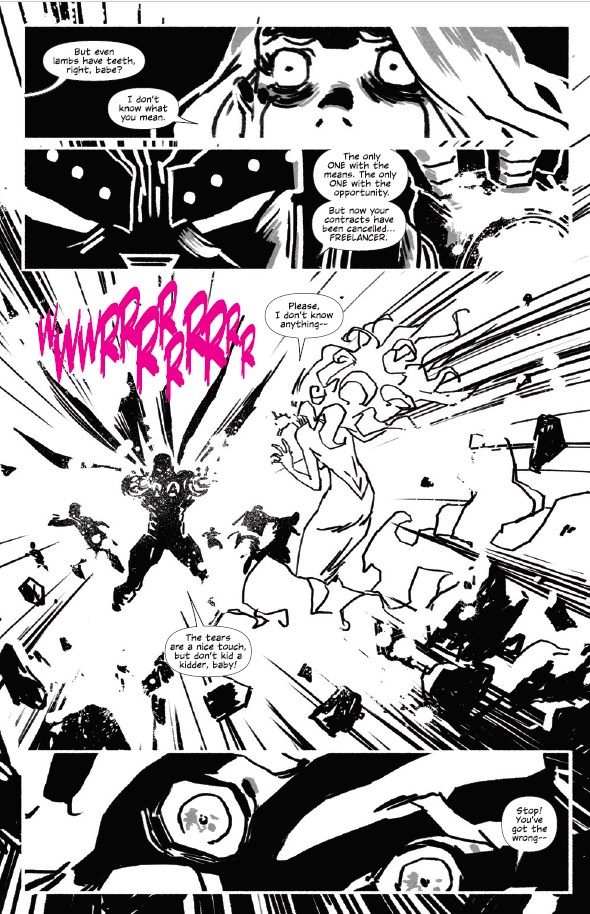